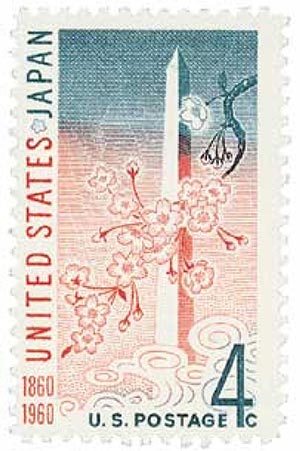 US #1158 was issued for the 100th anniversary of the treaty’s ratification. Click image to order.

On July 29, 1858, the US signed the Treaty of Amity and Commerce with Japan, opening trade between the two nations.

Following continuing attempts by Europeans to convert the Japanese to Catholicism, Japan cut off nearly all outside contact in 1639. For more than 200 years, Japan permitted trade only with Dutch and Chinese ships bearing special charters.

On July 8, 1853, under the direction of President Millard Fillmore, Commodore Matthew Perry led four steamships into Tokyo Bay to open relations between Japan and the United States. The Japanese were impressed by the giant steamships, which they had never seen before and described as “giant dragons puffing smoke.”

Perry carried with him a letter for the Emperor from President Fillmore, requesting that Americans stranded in Japan be returned home and expressing interest in opening trade between the two nations. He also presented the emperor with a variety of gifts, including a working steam locomotive model, a telegraph, a telescope, and several wines and liquors, all intended to show the Japanese the superiority of American culture and benefits of trade. 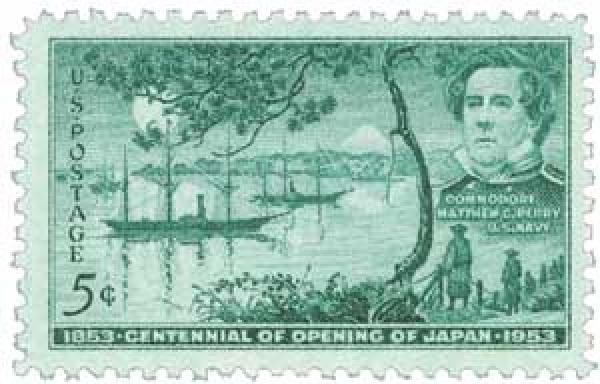 US #1021 was issued for the 100th anniversary of Perry’s first trip to Japan. Click image to order.

The following year, Perry returned on February 13 with 10 ships and 1,600 men. Though the Japanese resisted at first, they allowed him to land at Kanagawa (near present-day Yokohama). The two sides negotiated for several weeks before signing the Convention of Kanagawa on March 31, 1854. 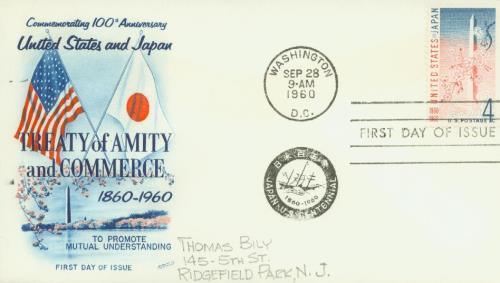 The 12-article treaty established peace between the two nations, opened the Japanese ports of Shimoda and Hakodate, permitted assistance to shipwrecked American sailors (and stated they wouldn’t be imprisoned or mistreated), allowed for currency exchange, forbid America from using any other Japanese ports, and opened an American consulate in Shimoda. The governments of both nations ratified the treaty nearly a year later, on February 21, 1855. The treaty was significant in that it led to several similar agreements between Japan and other nations. 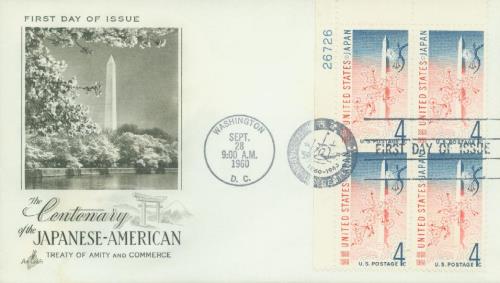 One thing that was missing from the Treaty of Kanagawa was trade.  Perry left that issue to US envoy Townsend Harris.  Harris spent two years convincing the Japanese to open trade with the US. When it became apparent that the British were planning to ask for the same privileges, the Japanese agreed to allow trade with the US.

US #4651-52 were issued for the 100th anniversary of Japan’s gift of cherry blossoms to the US as a sign of friendship. Click image to order.

The Treaty of Amity and Commerce was signed in Shimoda on July 29, 1858, opening the ports of Edo, Kobe, Nagasaki, Niigata, and Yokohama to American trade. The treaty also granted US citizens the right to live and trade in those ports. It was officially ratified during the visit of the first Japanese Embassy to the US on April 12, 1860. 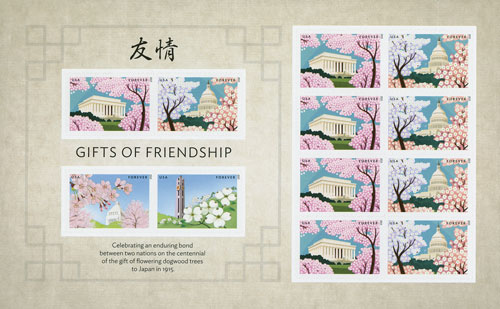