Posted on January 1, 2019 by MysticStamp 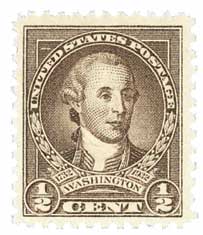 US #704 was based on a miniature painting by Charles Willson Peale in 1777.

On January 1, 1932, the US Post Office Department issued a set of 12 stamps honoring the 200th anniversary of George Washington’s birth.

The Post Office officially announced their plans for the set of stamps in November 1930.  Early on, they had grand ideas for the set.