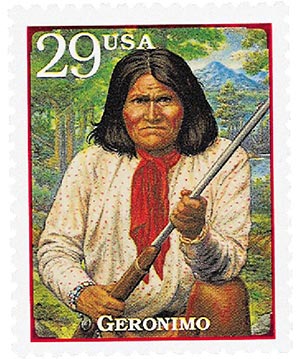 U.S. #2869m – Geronimo stamp from the famed Legends of the West sheet.

After decades of fighting to return to his homeland, Geronimo died on February 17, 1909, never able to realize his wish.

Geronimo was born on June 16, 1829, in present-day Arizona, in a region claimed by both Mexico and the Apache Indians. A Chiricahua Apache, Geronimo’s given Native American name was Goyaalé – “the one who yawns.” A talented hunter, he claimed to have swallowed the heart of his first kill to guarantee a successful life on the run. Coming from a small tribe of just 8,000 Apaches, he was often surrounded by enemies and proved to be a talented raider – leading four successful raids by the time he was 17.

END_OF_DOCUMENT_TOKEN_TO_BE_REPLACED

The Burning of the USS Philadelphia 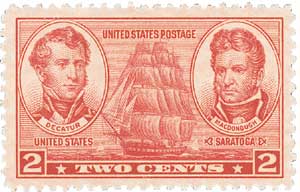 U.S. #791 – Both of the men pictured on this stamp (Decatur and Macdonough) participated in the burning of the Philadelphia.

On February 16, 1804, Stephen Decatur led a surprise assault on the captured USS Philadelphia in Tripoli.

In the early 1800s, pirates from the Barbary states (Morocco, Algeria, Tunis, and Tripolitania) frequently raided U.S. ships in the Mediterranean Sea. The sailors and their ship’s contents were often captured and then ransomed back to the U.S. for a hefty price. President Thomas Jefferson sent the U.S. Navy to the area to put an end to this in 1801, leading to a series of minor sea engagements that started the First Barbary War. Then, in June 1803, a small U.S. expeditionary force attacked Tripoli harbor (in present-day Libya) and major fighting began.

END_OF_DOCUMENT_TOKEN_TO_BE_REPLACED

Birth of Susan B. Anthony 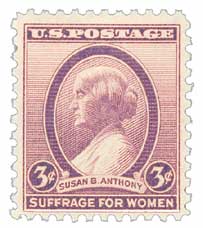 U.S. #784 was issued to honor the 19th Amendment, which gave women the right to vote.

Susan B. Anthony was born on February 15, 1820, in Adams, Massachusetts

Anthony’s father was a Quaker and abolitionist that taught all of his children how to be self-sufficient from an early age. When Anthony was six, her father moved the family to Battenville, New York to manage a cotton mill. She then attended – and later taught at – a Quaker boarding school.

END_OF_DOCUMENT_TOKEN_TO_BE_REPLACED

Posted in February 2016, This Day in History | 8 Comments

On February 14, 1859, Oregon was admitted to the Union. And 53 years later, so was Arizona. Let’s begin with Oregon’s road to statehood.

There was a large population of American Indians living in Oregon when the first Europeans arrived. Spanish sailors traveling from the Philippines to Mexico were probably the first white people to spot the coast of Oregon.

END_OF_DOCUMENT_TOKEN_TO_BE_REPLACED 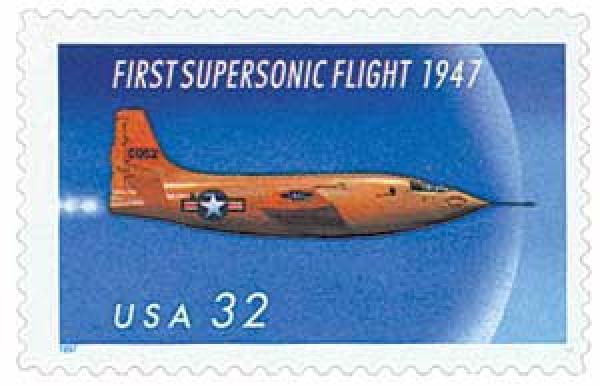 The first person to break the sound barrier, Chuck Yeager was born on February 13, 1923, in Myra, West Virginia.

From a young age, Yeager had an aptitude for working with machines. He grew up helping his father repair the machinery at his natural gas drilling business and could rebuild a car engine by the time he was a teenager.

END_OF_DOCUMENT_TOKEN_TO_BE_REPLACED 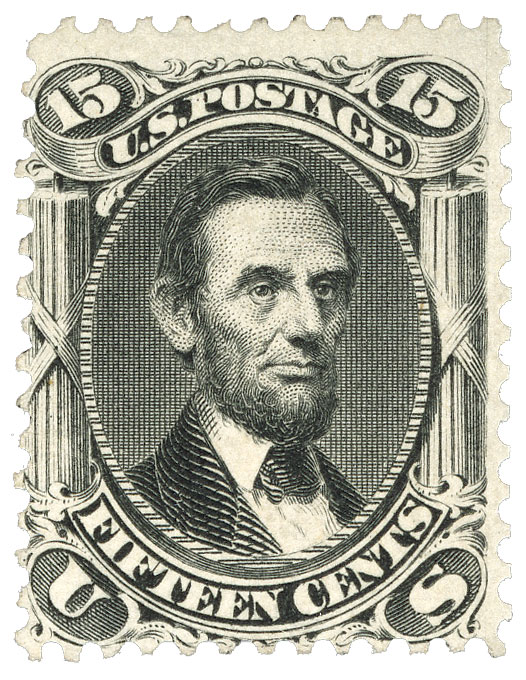 U.S. #77 – The first mourning stamp was issued nearly a year after Lincoln was shot.

Abraham Lincoln was born in a log cabin near Hodgenville, Kentucky, on February 12, 1809.

Accustomed to hard work, Lincoln was always large and strong for his age. He received little formal education, but read whatever books he could borrow from his neighbors. When Abe was seven, the Lincoln family moved to Spencer County, Indiana, and then to Illinois when he was 21. Lincoln’s first experience with slavery came at the age of 22, while he was working as a deck hand on a Mississippi River flat boat. He witnessed slaves being beaten, chained, and mistreated on that journey. It was then that he formed his opinions about the institution that, over 30 years later, would lead to the Civil War.