Since its inception in 2008, the Celebrating Lunar New Year stamps have featured “bright, festive designs that mark each year of the Chinese lunar calendar — Year of the Rat, Ox, Tiger, and others.”

The 2008 Chinese New Year begins February 7 as the Year of the Rat. The Chinese New Year starts with the second new moon after winter commences. The celebration lasts for fifteen days, ending with the Lantern Festival.

According to ancient Chinese legend, a man-eating beast, called the Nián, emerges from the mountains every 12 months to feed. The people believe that the beast is afraid of loud noises and the color red, so they scare the Nián away with fireworks and an excessive use of the color red. This custom has become the Chinese New Year celebration.

Merrymaking Green Lions dance along parade routes to the beat of a drum, cymbals and gong.  Their ferocious-looking paper-mâché heads and long, colorful cloth tails are controlled by Kung Fu martial arts members.  The first Green Lion dance was performed during the early Qing dynasty (1644-1911).  Requiring teamwork, strength, and agility, the dance has been used as physical training for Kung Fu members since that time.

The Tiger is a bold, determined, and impulsive sign, but one which can also bring hasty decisions and stubborn reactions. People born under the sign of the Tiger are thought to be lucky and courageous.  Each Chinese sign is associated with one of five elements (wood, fire, earth, water, metal). Metal is the dominant element in 2010, which reinforces the determination of the Tiger. It can be an invigorating combination – or a reckless one.

Kumquats are symbols of the Lunar New Year for reasons beyond their taste. In Chinese society, words often have symbolism not only for what they mean, but what they sound like, or can be connected to. The word “kumquat” is based on the Cantonese words kam (gold) and kwat (orange). Gold refers to good fortune and orange suggests vitality. Kumquats are given in pairs as gifts during the New Year, since two is a very lucky Chinese number.

The dragon remains a star attraction during Lunar New Year celebrations.  An ornate dragon figure is carried on poles by as many as 50 people who perform a highly choreographed dance.  The head is typically made of wood and painted in brilliant colors, while the body is made of similarly colored cloth.  The body is separated into sections, so it moves like the rippling rivers often associated with Oriental dragons.

According to legend, long ago a monster called Nian attacked and destroyed villages each spring. One year, the townspeople threw bamboo in a fire and scared the monster away with the loud popping sounds. Every year after that, bamboo fires kept Nian at a distance. 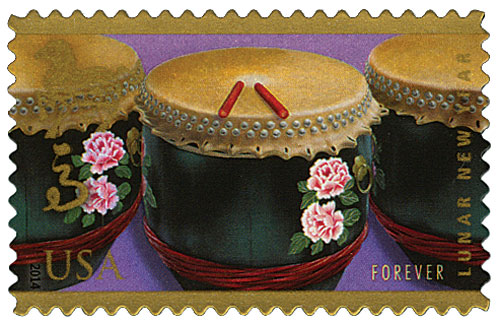 Rhythmic beats from ceremonial drums announce the arrival of the Chinese New Year and provide the music for the lion dance.  In addition to the drum presentations, an important custom is decorating with the color red. It is found on lanterns, door hangings, money envelopes, and even ceremonial drumsticks. The deep, rich color represents good fortune and joy.  Peonies also decorate homes and businesses.  These red or pink flowers are thought to bring prosperity, as well as add color to wintery days. 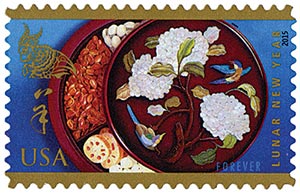 This stamp pictures a Tray of Togetherness or Chuen-Hop.  A traditional part of New Year celebrations, the wooden tray is set out for guests and contains dried fruit, candies, and other treats.  The Year of the Ram is also called the Year of the Goat and Year of the Sheep. 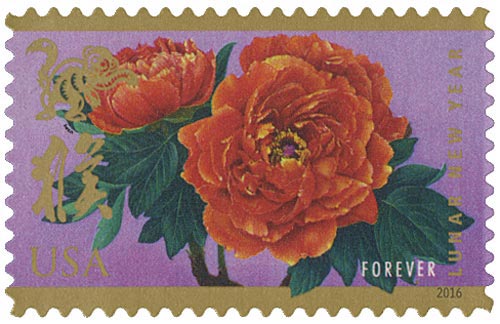 Peony blossoms decorate everything from drums to teapots during Lunar New Year.  Businesses display potted peonies and friends give them as gifts.  The popular flower can be found almost everywhere during the festivities.  So even if someone cannot get a hold of their own fresh winter peony, they can be sure the prosperity it offers will still find them. 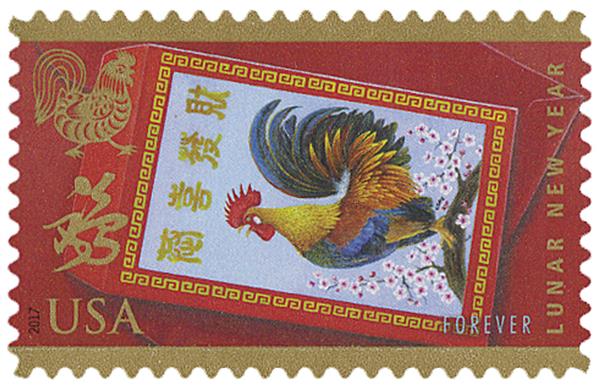 During Chinese New Year celebrations, hong bao, red envelopes containing money, are gifted to children and unmarried adults.  The color of the envelope is a symbol of good luck and happiness and is believed to ward off evil spirits.  The money inside is traditionally new or crisp notes and the amount usually ends in an even number.  Odd numbers and amounts with the number four are generally avoided because they are associated with funerals – in Mandarin, “four” is phonetically similar to “death.”