Posted on November 7, 2014 by MysticStamp

Hanukkah is a celebration of a miracle that occurred at the Temple of Jerusalem in 165 B.C., when the Maccabees revolted against Syrian King Antiochus IV.  The temple was reclaimed, but only enough purified oil was on hand to keep its light burning for one night.  Yet the lamp burned for eight days, allowing the Maccabees time to purify more oil.  Since that time, Jewish people celebrate the “Festival of Lights” each year for eight days.  The U.S.   Since 1996, the US has issued Hanukkah stamps to commemorate this joyous holiday.

Hanukkah traditions include singing, chanting blessings, exchanging gifts, and spinning the dreidel in children’s games of chance. Dreidels commonly bear a Hebrew letter on each side, the first letters of words which mean “a great miracle happened there (in Israel)”.  This design was used again in 2006, when it was issued with a 39¢ value (US #4118), in 2007 with a 41¢ denomination (US #4219), and 2008 with a 42¢ value (US #4372). 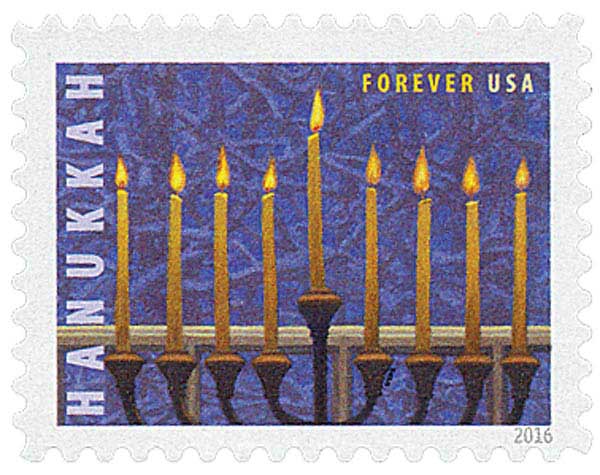