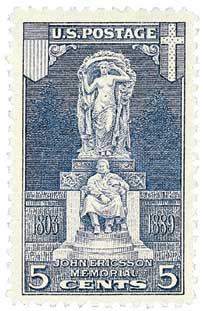 US #628 was the tallest US stamp at the time it was issued. Click image to order.

From a young age, Ericsson and his brother Nils showed an aptitude for canal building.  Their talent was discovered by the architect of the Gota Canal, who hired them as cadets of mechanics in the Royal Navy.

By the time he was 14, Ericsson was working as an independent surveyor.  Three years later he joined the Swedish Army.  He reached the rank of lieutenant and continued to work as a surveyor. When he wasn’t working, Ericsson built a heat engine that used the heat from a fire instead of steam to function. Ericsson soon realized he wanted to dedicate his time to building things and resigned from the army.  He went to England in 1826 but his heat engine didn’t gain the support he had hoped. 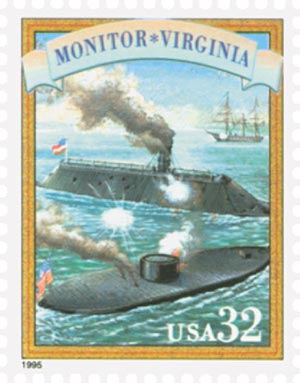 US #2975a pictures the Battle of Hampton Roads. Click image to order.

Undeterred by this setback, Ericsson put more time into inventing.  He developed improvements to steam engines, including improving the heating process to provide more oxygen.  In 1829, he worked with John Braithwaite to build the Novelty steam locomotive for a trial run of the Liverpool and Manchester Railway.  The Novelty was well received, but it didn’t win the competition. Ericsson and Braithwaite designed two more steam locomotives, but neither was purchased.

While some of Ericsson’s inventions around this time failed, some proved successful.  He invented a surface condenser that enabled steamers to recover freshwater for its boilers while in the ocean.  He also created a pressure-activated fathomer.  However, these were considered minor successes and Ericsson spent some time in debtors’ prison. 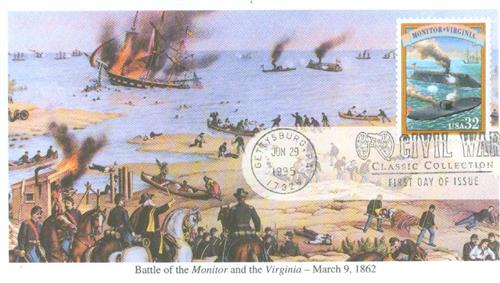 Ericsson then turned to ship design.  While the British Navy rejected his new propeller design, that led him to meet American Captain Robert Stockton.  He encouraged Ericsson to come to America, where it would be better received.  So Ericsson moved to New York in 1839 and was eventually charged with building a 700-ton sloop that became the USS Princeton.  It took three years to build and was one of the most advanced warships of the day, winning a speed record in 1843.  However, over time Stockton had worked to gain more credit for the ship than he deserved, going so far as to design a new gun.  But Stockton’s gun was faulty and killed two American politicians during a firing demonstration.  Stockton blamed the issue on Ericsson, preventing him from getting paid.

Ericsson soon began working with Cornelius H. DeLamater, who owned an Iron Works.  Ericsson was free to experiment all he wanted there.  He built his first iron steamboat and his first hot-air invention while there. In the 1830s Ericsson invested a good deal of time in hot-air engines.  While his first few failed, he eventually found success in his caloric boilerless engines. 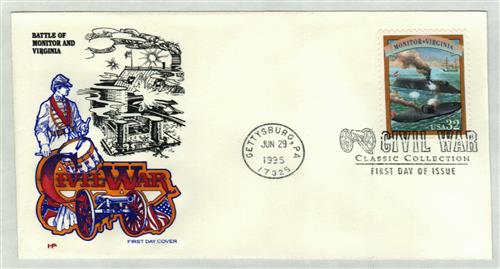 After the Civil War began, the Confederacy converted the USS Merrimack into an ironclad ship, leading the Union to call for one of their own.  Though Ericsson resented the navy for his previous treatment, he was encouraged to submit a design and presented the USS Monitor.  His design was unusual, inspired by Swedish lumber rafts, but it was accepted, built, and launched within about 100 days.  Just days after it was launched in March 1862, it battled the CSS Virginia (the former USS Merrimack) at the Battle of Hampton Roads.  While the battle ended in a stalemate with neither ship able to sink the other, Ericsson’s design was considered a success and several more monitors were ordered.  Several features of the Monitor would be included in future warships around the world, particularly the rotating turret, which is still seen on warships today. 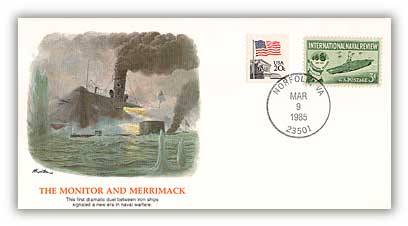 Ericsson went on to design other naval ships and weapons, including a torpedo boat and “sun engines” that used solar energy for hot air engines.  He died on March 8, 1889, the anniversary of the Battle of Hampton Roads.  In accordance with his wishes, Ericsson’s remains were returned to Sweden.  He was sent on a naval escort with 100,000 bystanders watching as the ship departed.