Happy Birthday to the author of the acclaimed young adult novel, “The Yearling.” 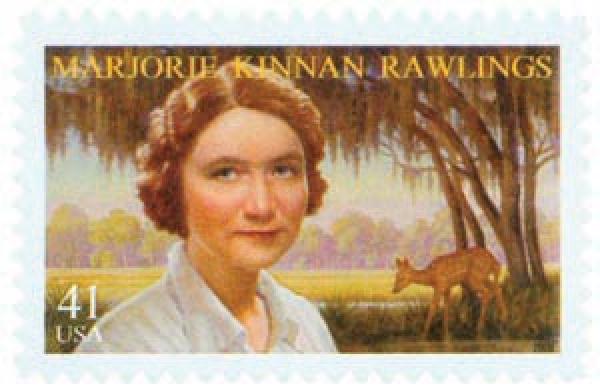 US #4223 from the Literary Arts Series. Click image to order.

Marjorie began writing when she was six years old.  She submitted her stories to children’s sections of several newspapers until she was 16.

Marjorie won her first award in 1907 for a short story that was published in The Washington Post.  The contest’s youngest winner in history, Marjorie won several contests in her adolescence.  In 1913, following the death of her father, Marjorie moved to Madison, Wisconsin, with her mother and younger brother.

After graduating from the University of Wisconsin in 1918, Marjorie married fellow writer Charles Rawlings.  She worked briefly for the YWCA’s editorial board before moving to Louisville and later Rochester, New York.  She worked for papers in both cities and wrote a syndicated column titled “Songs of the Housewife.” 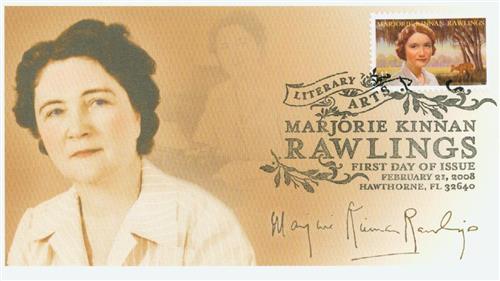 In 1928, the Rawlings moved to an orange grove named Cross Creek, near Hawthorne, Florida.  She wrote letters to her editor at Scribner’s about life in Cross Creek and he encouraged her to write stories about what she saw there.  It was in this quiet, rural setting that Marjorie found inspiration for some of her most famous works.  Over the next ten years, she wrote a number of award-winning stories and books inspired by life at Cross Creek, such as “Gal Young Un” and “South Moon Under.”  Each of these stories explored the human desire to function in harmony with nature.

Initially, the local residents were unsure about Marjorie’s stories.  Some questioned who she was writing about.  And when one mother recognized that a character in one of the stories was based on her son, she threatened Marjorie with physical violence. 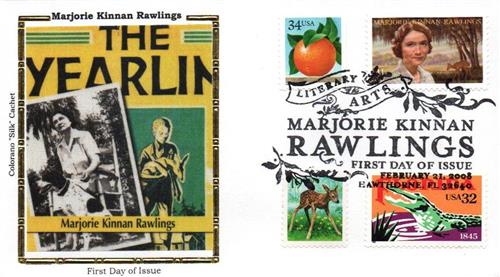 Marjorie died on December 14, 1953, and left most of her property to the University of Florida, which named a dormitory in her honor.  Her home in Cross Creek was later made the Marjorie Kinnan Rawlings Historic State Park.  One of her children’s books was published after death and two more of her books were made into movies – Gal Young Un and Cross Creek.  Marjorie was also inducted into the Florida Women’s Hall of Fame and was named a Great Floridian in 2009.

3 Responses to "Happy Birthday to the author of the acclaimed young adult novel, “The Yearling.”"