Opening of the Panama Canal

U.S. #856 pictures President Theodore Roosevelt, who was one of the major proponent’s of creating the canal, as well as George Washington Goethals, the project’s chief engineer.

After a decade of construction, the Panama Canal opened to traffic on August 15, 1914.

For centuries, explorers, kings, and capitalists sought a way to cut their shipping times by cutting through the isthmus of Panama. In 1903, the United States helped Panama declare its independence from Colombia. President Theodore Roosevelt saw the creation of a canal across Panama as vital to America’s role as a global power. The following year began construction on the Eighth Wonder of the World – the Panama Canal. Roosevelt was so vested in the project that he visited the work site – making him the first sitting president to leave the continental U.S. during his term. END_OF_DOCUMENT_TOKEN_TO_BE_REPLACED

After nearly six years of a world at war, the Japanese surrendered on August 14, 1945, effectively ending World War II.

By the summer of 1945, Germany had surrendered, ending the war in Europe. However, Japan refused to surrender and continued to fight. The Allies felt they had little choice but to launch a major attack. The U.S. had been secretly working on an atomic bomb, dubbed the “Manhattan Project,” which was ready to be deployed that August. END_OF_DOCUMENT_TOKEN_TO_BE_REPLACED

Work Begins on the Berlin Wall

U.S. #3211 – During the Berlin Airlift, the U.S. and our Allies delivered food and supplies to blockaded West Berlin.

Shortly after midnight on August 13, 1961, East German soldiers laid barbed wire and bricks on the border to West Germany, creating the Berlin Wall.

After the Nazis were defeated in World War II, Germany was divided into two countries. The German Democratic Republic in the east was part of the communist Soviet Bloc, while the Federal Republic of Germany was aligned with Western Europe. The capital city of Berlin was technically part of the Soviet zone, but was split as well. The Soviets attempted to blockade the Allied-supported western half of the city, but the Berlin airlift foiled those plans. END_OF_DOCUMENT_TOKEN_TO_BE_REPLACED 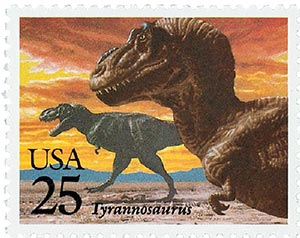 While searching for fossils in South Dakota, paleontologist Sue Hendrickson made a colossal discovery on August 12, 1990.

Working with the Black Hills Institute of Geological Research, Hendrickson and a team of workers had spent the summer exploring the Cheyenne River Indian Reservation. After discovering Edmontosaurus bones, they prepared to leave, but got a flat tire. While the rest of the group went to a nearby town to fix the truck, Hendrickson decided to explore some nearby cliffs that they hadn’t visited. Near the base of a cliff, she found small pieces of bone, then looked up to see much larger bones sticking out of the cliff wall. She immediately reported this to institute’s president who determined the bones were that of a Tyrannosaurus rex. Hendrickson and a small group remained at the site to excavate the bones, and were excited to find how much had been preserved. END_OF_DOCUMENT_TOKEN_TO_BE_REPLACED

Babe Ruth was a man of huge achievements. He began his baseball career as a left-handed pitcher, and later moved to the outfield. Babe did not achieve legendary status because of his talents in the field, though. He won America’s heart by swatting dramatic home runs and with his larger-than-life style.

By August 1929, he had racked up an unprecedented 499 home runs. Prior to his game at Cleveland’s League Park, Babe approached the field’s police chief. He told the chief he would hit his 500th home run that day and wanted to keep the ball. END_OF_DOCUMENT_TOKEN_TO_BE_REPLACED

Birth of the Smithsonian Institution

After a decade of debates, the Smithsonian Institution was established on August 10, 1846.

The story of the Smithsonian begins with British scientist James Smithson, who died in 1829. His will stated that if his nephew died without heirs, his estate should go to the U.S. to create “the Smithsonian Institution, an establishment for the increase and diffusion of knowledge among men.”

The U.S. government was notified of this bequest following the death of his nephew in 1835. Senators debated whether they had the authority to create such an institution, but eventually ruled in favor. Representatives traveled to England to appear before the British court and returned to America in 1838 with about $500,000 for the Smithsonian. END_OF_DOCUMENT_TOKEN_TO_BE_REPLACED