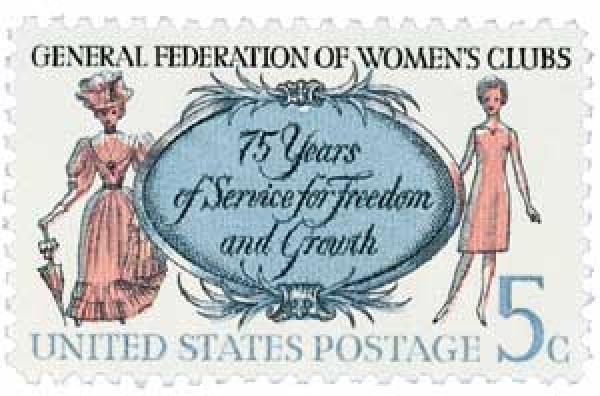 US #1316 was issued for the federation’s 75th anniversary.

On April 24, 1890, the General Federation of Women’s Clubs was founded.

The federation’s roots date back to 1868 when journalist Jane Cunningham Croly tried to attend a dinner honoring Charles Dickens. The all-male press club refused to allow her to attend because she was a woman, so she decided to create her own literary club, Sorosis. 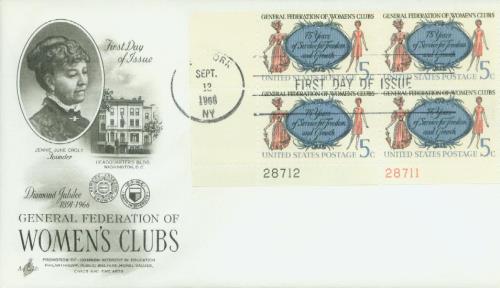 To mark the 21st anniversary of Sorosis in 1889, Croly invited members of 61 women’s clubs to a conference in New York. The following year, Croly invited the women to return to New York to form a larger organization aimed at uniting “women’s clubs to enhance community service by volunteers throughout the world.” Women from 63 clubs then went to New York on April 24, 1890, and ratified a constitution, officially forming the General Federation of Women’s clubs 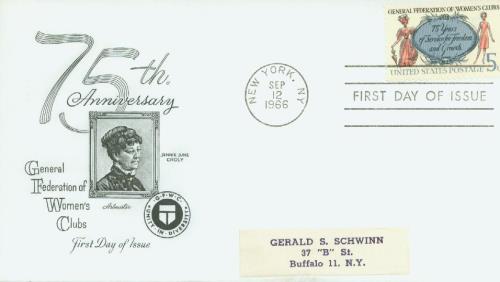 The federation then elected Charlotte Emerson Brown as their first president. In 1901, the federation was granted a charter from Congress and proclaimed, “We look for unity, but unity in diversity.” That eventually became their motto. By 1906, over 5,000 clubs had joined the federation. For several years, it was the largest national women’s organization in the country (until the National American Woman Suffrage Association). The organization reached its peak membership in 1914 with 1.7 million members. It was that same year that the federation officially offered its support to the suffrage movement.

US #3183o from the Celebrate the Century series.

Among the goals of the General Federation of Women’s Clubs was the establishment of an eight-hour workday, ending child labor, reforming the civil service, and conservation. In 1906, the federation launched a massive letter-writing campaign that aided in the passage of the Pure Food and Drug Act. Over the years, the federation also played a role in establishing a number of public libraries, passing child labor laws, and establishing the National Park Service. The federation has also lent its support to the cause of Native Americans, including the return of their lands and promoting religious and economic independence.

By the 1990s, the federation had reached all 50 states and more than 20 countries. During that time, they were dedicated to issues including literacy, discrimination against women, family and child welfare, and world hunger. 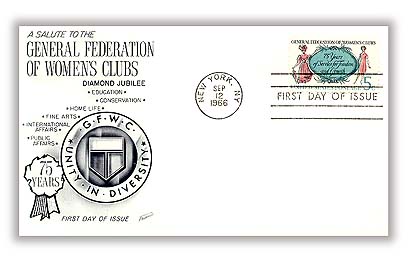 Today, there are about 100,000 members in over 3,000 clubs that are part of the federation. Recent projects have focused on the arts, nature, education, healthy lifestyles, and world peace.

Over the years, several members have appeared on US stamps: