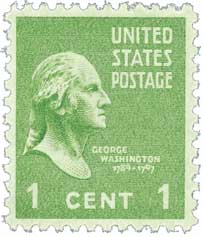 U.S. #804 – The first stamp issued in the Presidential Series.

President Franklin D. Roosevelt first suggested a stamp series honoring all the deceased presidents in 1934. Initially, the new stamps were planned to be commemoratives, but it was ultimately decided that they’d be definitive to replace the Series of 1922, which had been in use for 12 years.

Three years later the Treasury Department announced a national design competition for the new stamps. Entrants needed to propose a design for the 1¢ George Washington stamp. The winning design would be used for the rest of the stamps in the series, and the winning designer would win $500. Additionally, the second and third place designs would also win $300 and $200 respectively.

The contest was open from June 22 to September 15, 1937. More than 1,100 people submitted designs, including some famous artists. After several rounds of eliminations, the panel of philatelic specialists and art experts selected the design submitted by Elaine Rawlinson of New York City. Her design showed Washington in profile based on a bust by noted sculptor Jean-Antoine Houdon. This first stamp was issued on April 25, 1938. 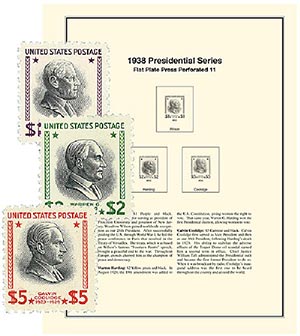 The rest of the stamps in the series featured similar profiles based on sculptures, paintings, and bronze statues. (Though there were some variations in the borders and the higher-value stamps were printed in two colors.) Each president’s bust was accompanied by his name and dates in office. Additionally, the 1¢ through 22¢ stamps each have a denomination corresponding to the man’s presidency, with Washington on the 1¢ stamp, John Adams on the 2¢, and so on. The stamps follow this format through the 22¢ Grover Cleveland stamp. 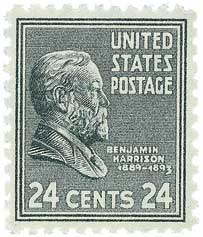 U.S. #828 – The first stamp in the series to depart from the original numbering system.

Cleveland served two non-consecutive terms, as the 22nd and 24th president. Additionally, a 23¢ stamp would have been useless, so it was decided that there would be no 23¢ stamp and Benjamin Harrison would be featured on the 24¢ stamp. McKinley (the 25th president) was then honored on the 25¢ stamp. But that would be the last stamp whose denomination corresponded to the president’s term. After that the stamps had higher values that filled important postal needs.

The Prexies featured the portraits of 29 presidents, 12 of whom had never appeared on a U.S. postage stamp before. The series also included four denominations that had never been used on U.S. postage stamps before – 18¢, 19¢, 21¢, and 22¢. These values were only included to follow the presidential succession format and didn’t meet any postal rates at the time. 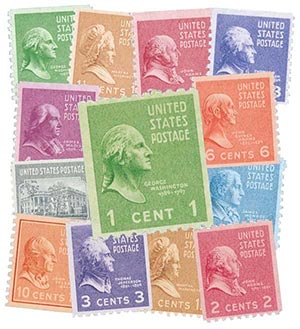 In one major departure from tradition, George Washington didn’t appear on the normal letter rate 3¢ stamp. This was the first time he hadn’t since 1870. Instead, it pictured Thomas Jefferson. Washington was pictured on the 1¢ post-card rate stamp, though, which usually pictured Benjamin Franklin. Other non-presidents in the series include Martha Washington and the White House.

All of the presidents after Washington were issued in order throughout 1938. Several coil stamps and booklets were then issued in January 1939. 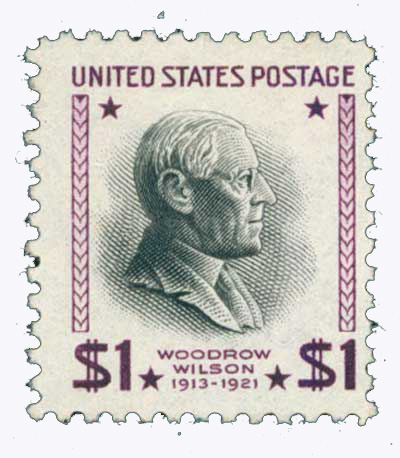 The Prexies were in use for over 18 years. During that time there were several color varieties and an interesting error. In 1951 the $1 Wilson stamp was accidentally printed on USIR (U.S. Internal Revenue) watermarked paper. This paper was intended for U.S. Internal Revenue tax stamps only. How the paper was mistakenly used remains a mystery, as does the exact number of error stamps printed.