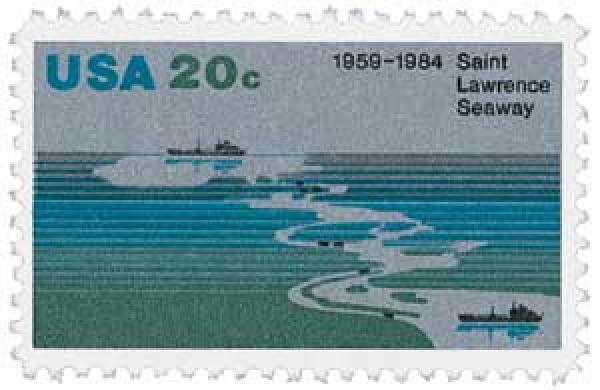 U.S. #2091 marks the 25th anniversary of the completion of the St. Lawrence Seaway.

The joint effort between Canada and the U.S. finally received authorization to begin in 1954, when the St. Lawrence Seaway Development Corporation was formed. Construction of the St. Lawrence Seaway was nearly as ambitious as the Panama Canal project. Several villages and hamlets were flooded, and new towns were built for 6,500 displaced residents. 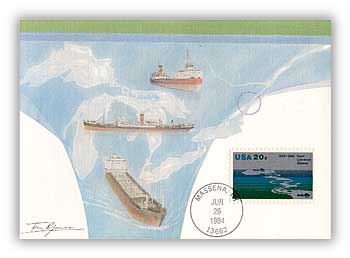 The existing system of smaller waterways was excavated, altered, or replaced by a single system 27 feet deep. At the time, the St. Lawrence Seaway was widely considered to be the largest work of engineering of all time. In addition to building locks and channels, hydroelectric plants were also constructed, reaching a total cost of $470 million.

The seaway opened on April 25, 1959, with the icebreaker D’Iberville making the first transit. Three months later, on June 26, Queen Elizabeth II and President Dwight Eisenhower presided over the formal dedication ceremony attended by some 20,000 people. After the ceremony, they boarded the Royal Yacht Britannia and entered the lift locks. 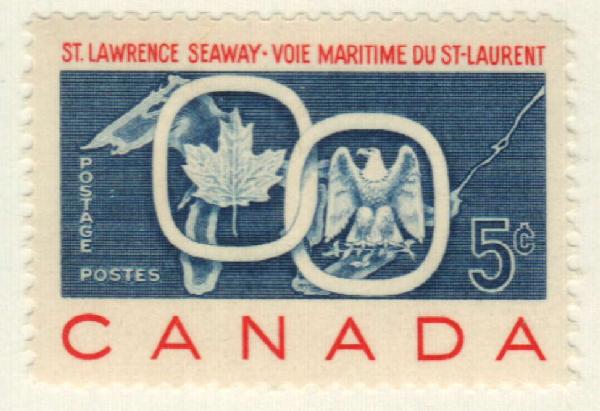 The St. Lawrence Seaway became a major commercial shipping route linking the Atlantic Ocean and the Great Lakes. The seaway extends from Montreal westward to the eastern shore of Lake Erie. It is formed by the St. Lawrence River, several lakes, and a system of canals and locks. In total, the seaway has about 65 miles of canals, plus 15 locks and three dams. Before the seaway was opened in 1959, cargo ships could not navigate many parts of this route, due to shallow or rough waters and changes in elevation.

Additionally, the seaway includes a hydroelectric dam that supplies power to parts of Ontario and New York. This dam created Lake St. Lawrence, which is more than 30 miles long. The hydroelectric project began producing power in 1958.

A joint project, Canada administers about 55 miles of canals and 13 locks while the U.S. runs 10 miles of canals and two locks.  The Saint Lawrence Seaway is the world’s longest deep-draft inland waterway. The seaway extends 2,038 nautical miles from the Atlantic Ocean at Montreal to Lake Superior. The series of canals that form the seaway permits ocean-going vessels to receive and deliver goods in 15 ports in the U.S. and Canada. In addition to shipping goods from America’s heartland, the seaway also plays an important role in recreation and tourism. 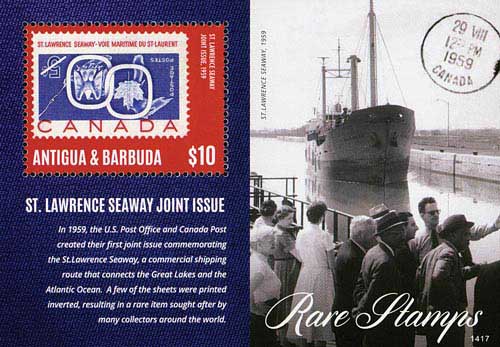 The St. Lawrence Seaway is generally open for navigation from April to December. On average, 50 million tons of cargo passes through the seaway every year. Approximately 40,000 jobs depend on the seaway, which supports a vast array of industries. Grain from American and Canadian prairies is carried to the international market via the seaway and accounts for 40% of the total cargo. Iron ore, coal, and steel are also carried to various ports along the seaway. Today, shipping on the 2,300-mile waterway generates over $3 billion annually for the U.S.

Click here to view historic photos of the St. Lawrence Seaway and here to see a detailed map.