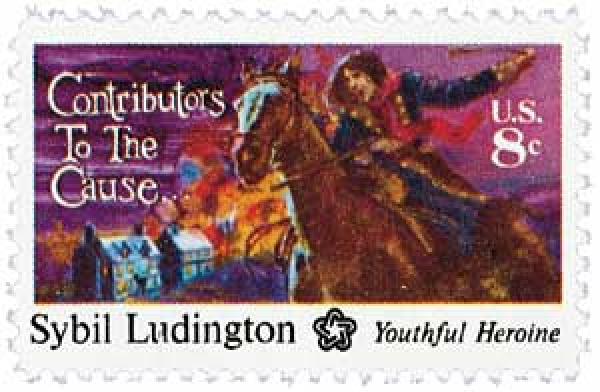 U.S. #1559 – Ludington was honored as part of the Contributors to the Cause Bicentennial Series.

On April 26, 1777, Sybil Ludington embarked on a nighttime ride twice as long as the one that made Paul Revere famous two years earlier.

Born on April 5, 1761 in Kent, New York, Sybil was the daughter of Colonel Henry Ludington, the leader of the local militia in Patterson, New York. During the Revolutionary War, Sybil wanted to join the militia because she didn’t like being ruled by Great Britain.

On April 26, 1777, as Sybil was tucking her siblings into bed, a messenger arrived at the family house. He had news that the British were burning the town of Danbury, Connecticut – the militia’s supply center. With only 150 militiamen in town at the time, Sybil’s father knew he needed to muster additional troops to protect the town from a British attack. With only hours before they’d arrive, he needed a volunteer to ride fast and hard to bring back troops. Sybil volunteered in a heartbeat.

It was 9 p.m. before Sybil got underway. By then, the glow from the burning town of Danbury could be seen for miles. She traveled 40 miles alone on horseback and in the dark. She banged a stick on doors to rouse the locals, calling out, “Muster at Ludington’s!”

Sybil rode all night through the rain – at one time fending off highwaymen with her father’s musket. Finally, exhausted after riding 40 miles, she returned home shortly before dawn.

There, 400 members of the local militia had gathered and soon marched off. They were too late to save Danbury, but in the Battle of Ridgefield – and other skirmishes – the British were so thoroughly harassed that they were driven back to their ships. They did not raid deep into Connecticut for the rest of the war.

News of Sybil’s ride spread, and General George Washington personally went to her house to thank her for her courage. Alexander Hamilton also wrote her a letter of thanks.

After the war, Sybil got married and had one son. She died on February 26, 1839. In 1935, in honor of her ride, New York State placed markers along the route she took. And since 1979, there has been a Sybil Ludington 50-kilometer race that closely follows the path of her ride.