On April 26, 1990, the USPS issued the first booklet in its Lighthouse stamp series.

Beginning in 1986, the USPS began issuing topical booklets of five stamps each.   Past topics had included fish, locomotives, classic cars, and steamboats.  In April 1990, the set of lighthouse stamps would be the first of two such topical booklets issued that year. 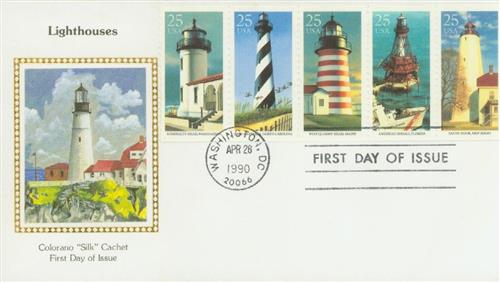 Lighthouses had been featured on stamps in the past, but some lighthouse enthusiasts were calling for more.  In 1987, James W. Hyland III, chairman of the Lighthouse Preservation Society, submitted a list of 10 lighthouses he thought should be honored on stamps to the Citizens’ Stamp Advisory Committee.  Initially, the committee supported his idea and proposed issuing 10 stamps in two panes honoring all of the lighthouses.  However, the USPS felt that would make for too many stamps, so they opted to just issue five, though a sixth would be pictured on the booklet cover.  Two of the six lighthouses had been on stamps before, Cape Hatteras and Sandy Hook.

The stamp designs were first unveiled on August 4, 1989, at the Customs House Maritime Museum in Newburyport, Massachusetts.  August 4th was the anniversary of the creation of the Revenue Marine (later the Revenue Cutter Service).  The stamps would be issued in 1990 to mark the 200th anniversary.

The stamps were issued on April 26, 1990, in Washington, D.C.  Less than two weeks after they were issued, some booklets were discovered without the white intaglio ink for “USA” and the denomination.  Some of these error books sold for over $500 each.

Five years later, the USPS issued a second booklet featuring lighthouses.  They included two lighthouses from the list submitted in 1990, but all of the lighthouses in this set were ones found along the Great Lakes.  Both of these sets proved quite popular, so the USPS continued issuing stamps honoring lighthouses from different areas of the country every few years, with the final issue coming in 2013. 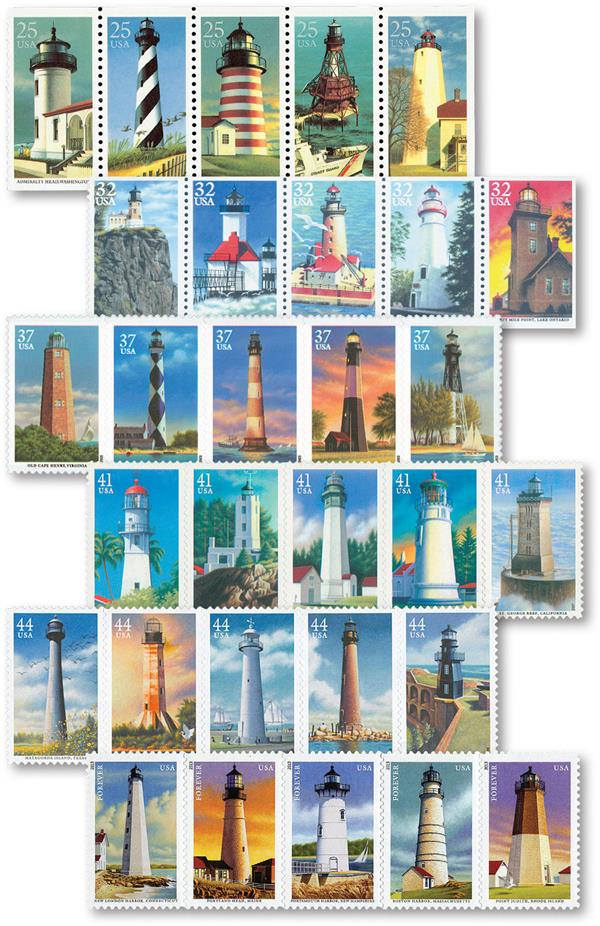