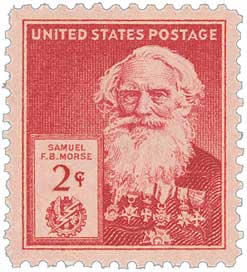 US #890 from the Famous American Inventors set. Click image to order.

Morse attended Yale College where he studied religious philosophy, mathematics, and the science of horses.  Morse frequently attended lectures on electricity and supported himself by painting.

Morse’s painting ability proved to be a true talent and in 1811, he was recruited to travel to England to study at the Royal Academy.  He was particularly inspired by the works of Michelangelo and Raphael and produced a number of impressive paintings.  Morse then returned to America in 1815 to begin his career as a full-time painter.

For the next 10 years, Morse painted several major figures, including Presidents John Adams and James Monroe.  In 1825, Morse had the honor of painting the Marquis de Lafayette.  While he was working, he received a letter by horse messenger from his father telling him that his wife was very ill.  The next day, he received another letter saying that she had died.  By the time he returned home, she’d already been buried.  Morse was distraught over the loss and upset that he hadn’t received the news of her poor health sooner.  He then resolved to find a faster means of long-distance communication. 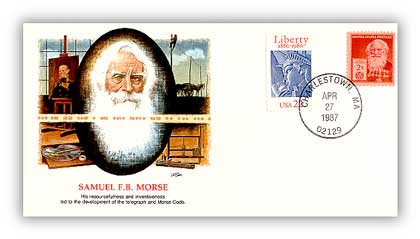 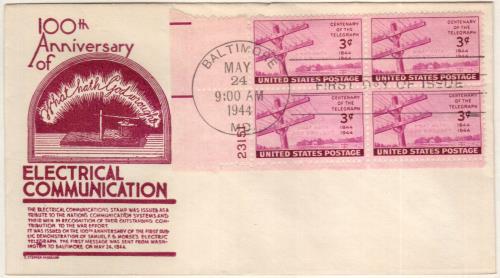 Morse continued painting and traveling, leading him to meet an expert in electromagnetism in 1832.  After witnessing his experiments with electromagnets, Morse developed the idea of the single-wire telegraph.  Though other inventors in Europe were also working on their own telegraphs, Morse continued to work on his own.

Morse received his patent in 1837, and sent his first telegram on January 11, 1838, across two miles of wire.  Morse and his assistant Alfred Vail, created Morse Code, a “dot and dash” system used to send information through the telegraph’s clicking sounds.  Together they continued to refine the system over the next few years. 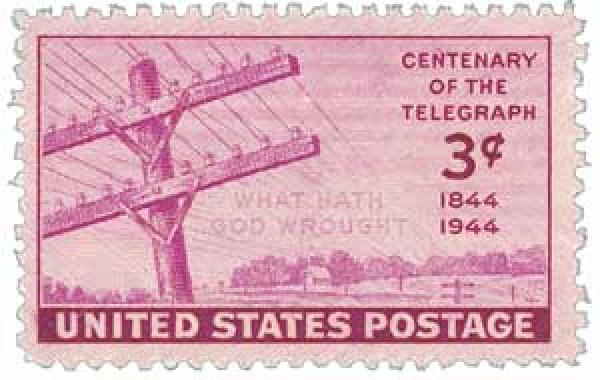 US #924 was issued on the 100th anniversary of Morse’s first telegraph message. Click image to order.

In 1844, Morse built an experimental line from the old Supreme Court Chamber in the Capitol Building in Washington, D.C., to the Mt. Clare Depot in Baltimore, Maryland.  Morse sent the first message, “What hath God wrought,” a quote from the book of Numbers in the Bible.  Commercial telegraphy took off in America after that.  In 1851, Morse’s telegraphic design was adopted as the standard in Europe as well.  By the time the Civil War began, telegraph lines were strung from coast to coast, making almost instant communication possible. 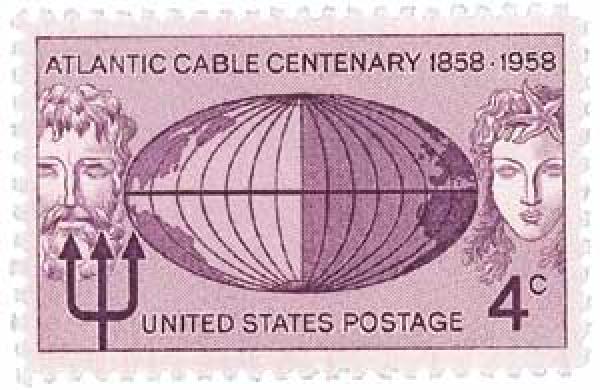 US #1112 was issued for the 100th anniversary of the Transatlantic Cable.  Click image to order.

Morse later worked on the transatlantic cable and invented a marble-cutting machine, before his death on April 2, 1872.  During his lifetime, Morse received a number of honors from other nations, but it wasn’t until later in his life and after his death that he was extensively honored in the US.  A year before he died, he was honored with a statue in New York’s Central Park.  His portrait was also later featured on the back of US two-dollar bill silver certificates.