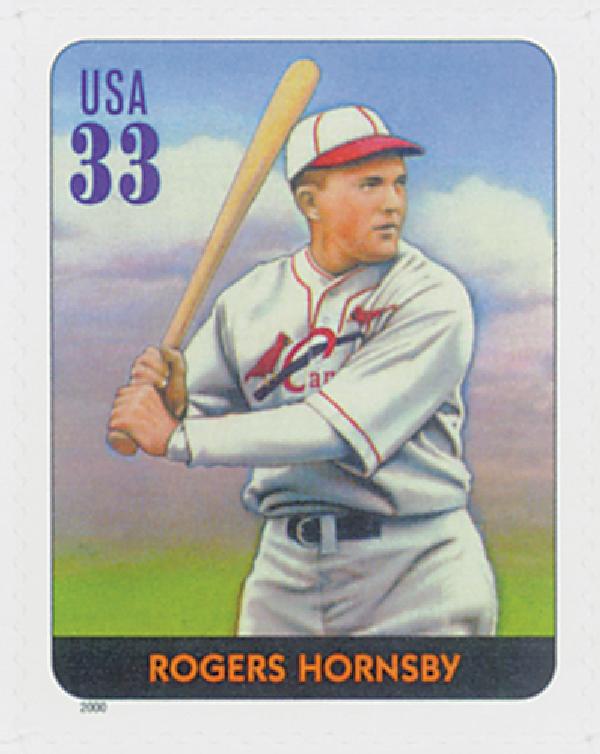 US #3408f from the Legends of Baseball sheet.

The youngest of six children, Hornsby began playing baseball at a young age, once stating, “I can’t remember anything that happened before I had a baseball in my hand.” When he was 10, Hornsby worked as a messenger boy in a meat packing plant, where he occasionally played as an infielder on the company team. By the time he was 15, Hornsby was playing on semi-professional baseball teams.

Hornsby first entered the minor leagues in 1914 with the Texas League’s Dallas Steers. He didn’t play any games and was eventually signed to the Hugo Scouts as a shortstop. He was then traded to the Denison Champions (later the Denison Railroaders), whom he helped win the pennant. At the end of the season, a sports writer listed Hornsby as one of the 12 players in the league with potential to make it to the majors.

Late in the 1915 season, Hornsby was signed to the St. Louis Cardinals. He finished that season with a sixth-place batting average and, at 19 years old, was the fourth-youngest player in the league. The following season, Hornsby was the starting shortstop on opening day, earning both runs batted in (RBIs) that won the game. He then hit his first major league home run on May 14, 1916. 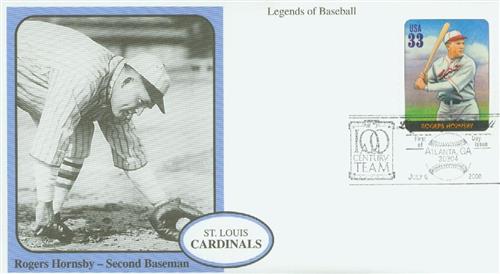 In 1920, Hornsby was moved to second base, where he remained for the rest of his career. He began the season with a 14-game hitting streak and ended it with the first of seven batting titles while also leading the league in on-base percentage, slugging percentage, hits, total bases, doubles, and RBIs. Hornsby continued to lead the league in hitting and by 1922 was the highest-paid player in the league’s history up to that point. That season he would set several records with a 33-game hitting streak, 42 home runs, 250 hits, and a .722 slugging percentage. And he won the first of his two Triple Crowns that year. His 450 total bases that year is still a National League single-season record. Hornsby also led all second basemen in putouts, double plays, and fielding percentage. 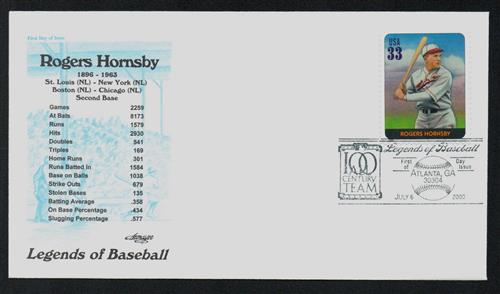 Despite injuries and arguments with the manager, Hornsby had several more good years with the Cardinals. In 1925, he was made team manager while continuing to play. (He would go on to manage most of the teams he joined in the coming years.) That year he earned his second Triple Crown, won the MVP Award, and had a slugging percentage that wasn’t matched until 2001. 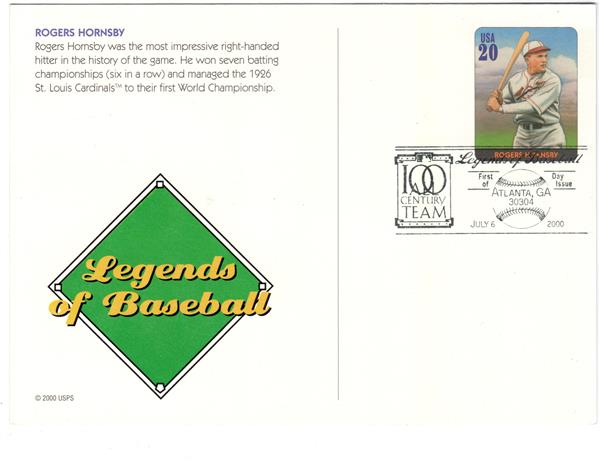 In 1927, Hornsby was traded to the New York Giants, where he led the league in runs scored, walks, and on-base percentage. After that season, he was traded to the Boston Braves. With the Braves, he earned his seventh batting title and led the league in on-base percentage, slugging percentage, and walks. At the end of that season the Chicago Cubs offered a substantial sum of $200,000 ($2.85 million today) plus five players for Hornsby, so he was traded once again. 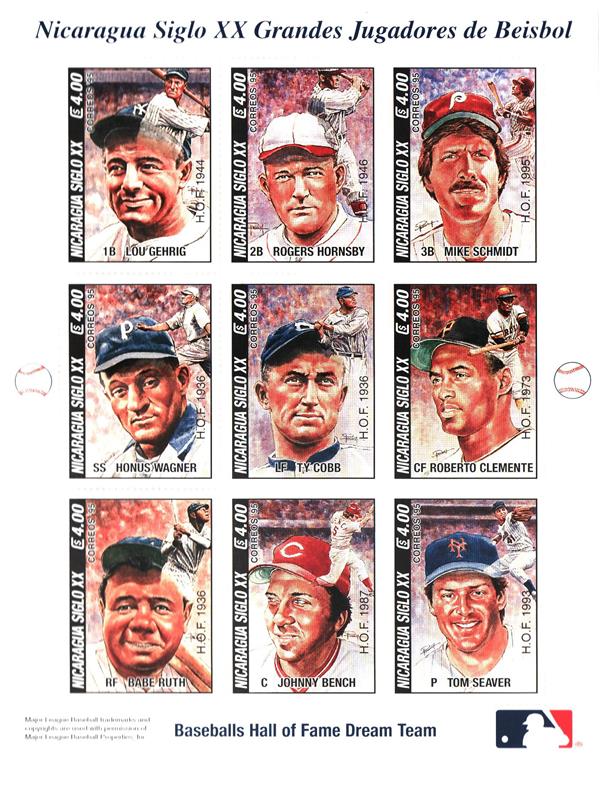 Nicaragua #2168 – The center stamp in the top row of this Baseball Greats sheet pictures Hornsby.

With the Cubs, Hornsby led the majors in runs scored and earned another MVP award. Over the next few years, a string of injuries brought down Hornsby’s numbers and 1931 was his last season as a full-time player. He returned to the Cardinals in 1933 before going to the St. Louis Browns later that year. He remained with that team as a manager and part-time player until 1937.

In 1939, Hornsby opened his own baseball school in Hot Springs, Arkansas. He ran the school for six weeks a year every year until 1952. Hornsby also managed several international minor league teams until his death on January 5, 1963. Over the course of his career, Hornsby had 2,930 hits, 301 home runs, and a .358 batting average, which is second only to Ty Cobb. He was inducted into the Baseball Hall of Fame in 1942.