U.S. #736 pictures the Ark and the Dove on their way to Maryland.

On April 28, 1788, Maryland was the seventh state to ratify the U.S. Constitution, an act that admitted it as America’s seventh state.

Spanish explorers became the first Europeans to reach the Maryland region when they explored the Chesapeake Bay in the 1500s. These explorers found Algonquian tribes, including the Choptank, Nanticoke, Patuxent, Portobago, and Wicomico, as well as some Susquehannock Indians living in the area.

In 1608, Captain John Smith of Virginia sailed the Chesapeake Bay north into the Maryland region. His written description of the area brought more visitors. In 1631, William Clairborne opened a trading post on Kent Island in Chesapeake Bay – this was the first colonial settlement in Virginia.

King Charles I granted this area to George Calvert, the first Lord of Baltimore, in 1632. But, Calvert died before he could sign the charter, so his son, Cecilius, the second Lord of Baltimore, took his place. The region was named Maryland after the wife of Charles I, Queen Henrietta Maria. Calvert sent colonists to Maryland on two ships, the Ark and the Dove. They arrived at St. Clements Island in the Potomac River in 1634. The colonists established St. Mary’s City near the southern portion of the Western Shore. 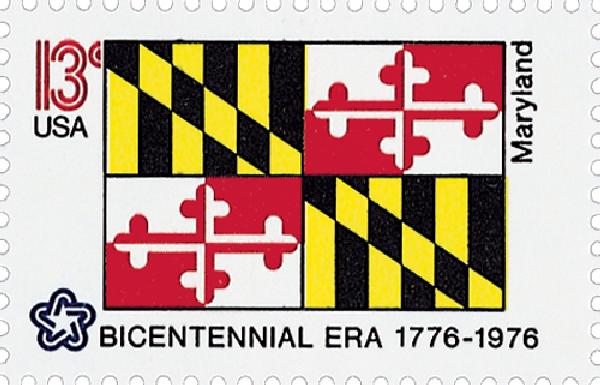 U.S. #1639 – The Maryland state flag is the only one to feature the coat of arms of and English Lord – George Calvert.

Calvert appointed his brother, Leonard, as governor of the colony. A Roman Catholic forced to support the Church of England, Calvert determined that Maryland should practice religious tolerance, and the colony passed a law protecting religious freedom in 1649. This religious tolerance attracted many settlers from other colonies.

In the 1700s, Maryland and Pennsylvania disagreed on their boundary line. Charles Mason and Jeremiah Dixon were contracted to survey the line in 1763. The survey was completed in 1767, and the boundary became known as the Mason-Dixon line. 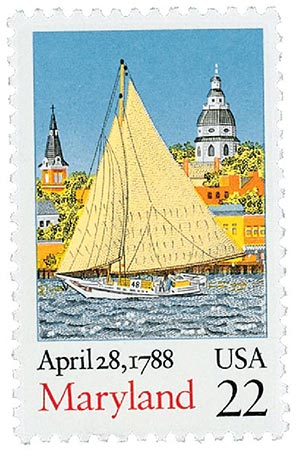 U.S. #2342 pictures a skipjack sailboat in the Annapolis harbor.

Maryland was involved in many protests against British policy before the outbreak of the Revolutionary War. Shortly after the Boston Tea Party, Marylanders burned the British ship Peggy Stuart and its cargo of tea in Annapolis. At the First Continental Congress in 1774, Maryland voted against conducting trade with Britain. After the war started, Maryland delegates at the Second Continental Congress voted for independence. The state adopted its first state constitution on November 8, 1776.

Very little fighting took place on Maryland’s soil during the American Revolution. However, Maryland supplied many troops, and its industries built ships and cannons for colonial forces. The Continental Congress moved the capital to Baltimore from December 1776 to March 1777, when Philadelphia was threatened by British troops. After the war, the Continental Congress met at the Maryland State House in Annapolis from 1783 to 1784. George Washington resigned his commission as the commander in chief of the Continental Army in the State House. The Treaty of Paris, which ended the war, was also signed there.

Maryland ratified the United States Constitution on April 28, 1788, making it the seventh state to join the Union. Maryland gave the nation the land to form the District of Columbia, the capital of the United States, in 1781. 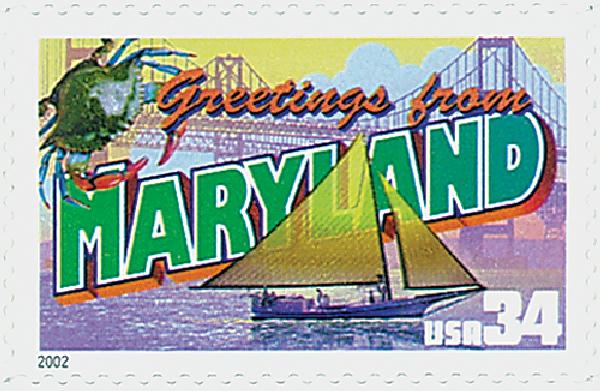 A great deal of the fighting during the War of 1812 took place in or near Maryland. In 1813, the British began raiding towns and farmhouses along the Chesapeake. British forces sailed up the Patuxent River and defeated American forces at the Battle of Blandensburg on August 24, 1814. After that victory, the British went on to storm Washington, D.C., where they burned the Capitol and several other government buildings. On September 12, 1814, British troops attacked Baltimore while British ships bombarded Fort McHenry from the Patapsco River. Francis Scott Key wrote “The Star-Spangled Banner” after watching the British bombardment of the fort. This poem was later set to music and became the national anthem of the United States.

At the start of the Civil War, Maryland was placed in a difficult position. It was a slave state, yet as one of the 13 original colonies it was devoted to the Union. When Virginia joined the Confederacy, the fate of Washington, D.C., was firmly in the hands of Maryland. If it joined the Confederacy, then the capital would lie deep in Southern territory. Maryland did join the Union, but many Marylanders joined Confederate forces. 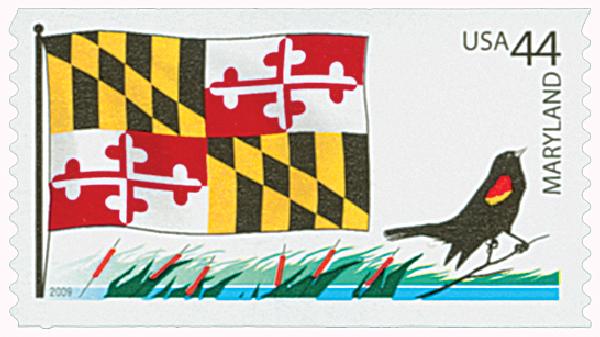 U.S. #4296 pictures the state flag with a red-winged blackbird in a cattail marsh.

Several major Civil War battles were fought in Maryland. In 1862, General Robert E. Lee invaded the state. His army fought Union forces at the Battle of Antietam, near Sharpsburg, on September 17, 1862. Lee crossed through Maryland in June 1863 to fight the Battle of Gettysburg in Pennsylvania. Troops under Confederate General Jubal A. Early crossed the Potomac River and defeated a Union force in the Battle of Monocacy, near Frederick, on July 9, 1864. The state adopted an antislavery constitution in 1864.

Even before the Civil War, Maryland, especially the city of Baltimore, had advanced industrially. Its location on the Chesapeake Bay, which has several excellent harbors, further enhanced its economic growth. The Baltimore and Ohio Railroad and the Chesapeake and Ohio Canal gave the state a westward shipping route. The Chesapeake and Delaware Canal allowed goods to be shipped eastward. Peter Cooper built America’s first coal-burning steam locomotive, the Tom Thumb, in 1830. America’s first ocean going iron steamship, De Rosset, was completed in Baltimore in 1939. 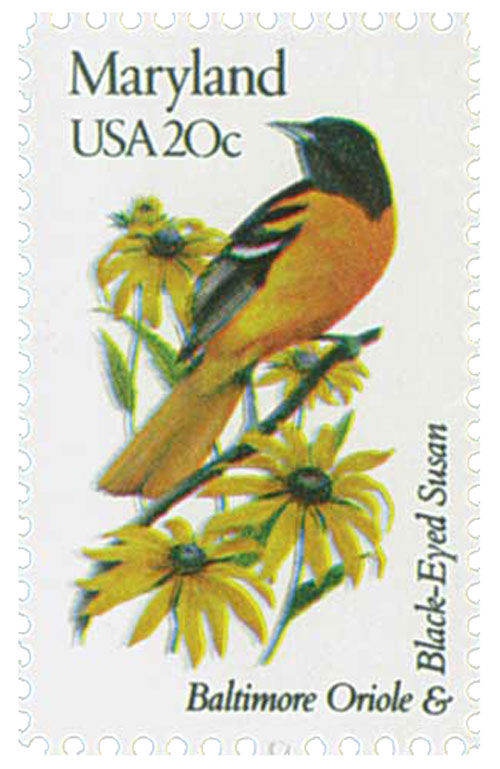 U.S. #1972 pictures the Maryland state bird and flower – the Baltimore oriole and the black-eyed Susan.

Maryland was hit particularly hard during the Great Depression. However, with the start of World War II, economic activity resumed. Large numbers of people moved to Maryland from the Appalachian Mountain region and from the South. New cities and communities were built between Baltimore and Washington, D.C. The state also did much to improve its transportation systems. In 1950, Baltimore’s Friendship International Airport, now called Baltimore-Washington International Airport, was opened. Between 1952 and 1963, the state completed several major construction projects, including the Baltimore Harbor Tunnel, the Chesapeake Bay Bridge, the John F. Kennedy Expressway, and an expressway connecting Baltimore and Washington, D.C.

Maryland is a center for space research and production. NASA’s Goddard Space Flight Center is located in Greenbelt. The state is also focusing on an environmental cleanup of the Chesapeake Bay. This large-scale project involves several other states.