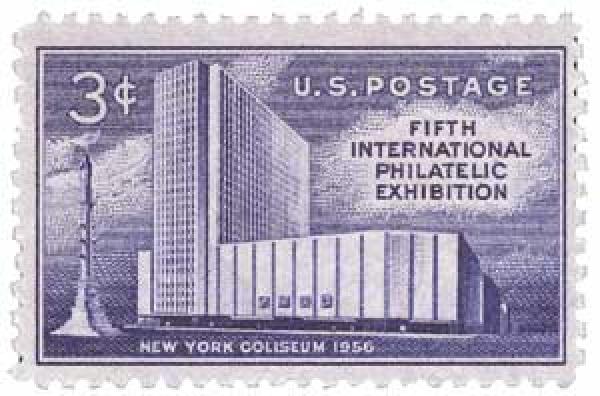 US #1076 – Issued on the third day of the show, this stamp pictures the convention hall as well as the Columbus Monument in Barcelona, Spain.

The Fifth International Philatelic Exhibition (FIPEX) opened its doors to a record 60,000 visitors on April 28, 1956.

America’s fifth international philatelic exhibition was planned in conjunction with the opening of a brand new exhibition hall, the New York Coliseum at Columbus Circle. The $35 million, 323,000-square-foot coliseum had begun construction in 1954. 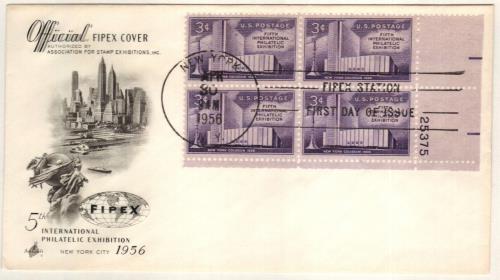 Initially, the construction of the coliseum was ahead of schedule, and FIPEX was planned to run from March 3 to 11, 1956. However, in May 1955, one of the floors collapsed, killing one and injuring 50. Though they initially expected the show to open on time, this delayed the opening by nearly two months.

By April 28, 1956, FIPEX was ready to open. During the first three hours, some 20,000 people entered the exhibition hall. Over the course of the day, some 60,000 would attend the show, a record up that time. While FIPEX occupied the top two floors of the convention hall, two other events were being held on the other two floors – the New York Auto Show and the New York Photography Show. Reportedly, FIPEX has the largest turnout of the three events. Over the course of the show, some 268,000 people attended FIPEX, a 37 percent increase over the previous CIPEX held in 1947. 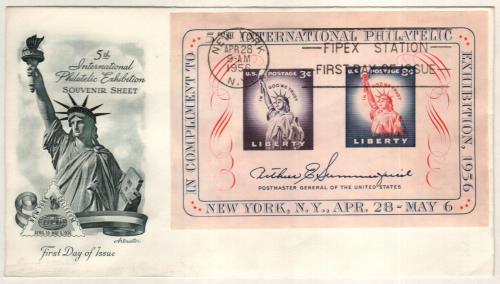 Among the show’s events was the issue of four different US postal items. There was a miniature souvenir sheet, a 3¢ commemorative stamp, a stamped envelope, and a postal card. Many people at the time complained about the souvenir sheet, “Why do you… permit the appalling visual standards…? Who allowed the most common of US stamps designs today – the Liberty 3¢ and 8¢ – to feature on what should be an imaginative keepsake?” However in, years since, the souvenir sheet has become more popular. 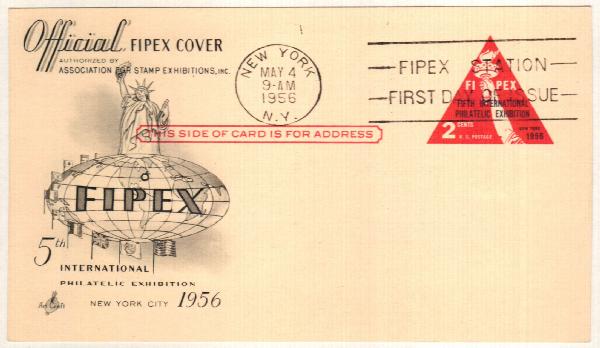 US #UX44 was issued on May 4 at the exhibition.

During the dedication ceremony for UC25, Director of the Division of Philately Robert E. Fellers called it “one of the most striking air mail stamped covers ever issued by the Post Office Department.” And he went on to say “We have had many requests form time to time to issue a commemorative airmail envelope and it was most gratifying to us in the Department to be able to issue such an envelope during this magnificent international stamp show in the most impressive setting ever provided for any stamp exhibition.” 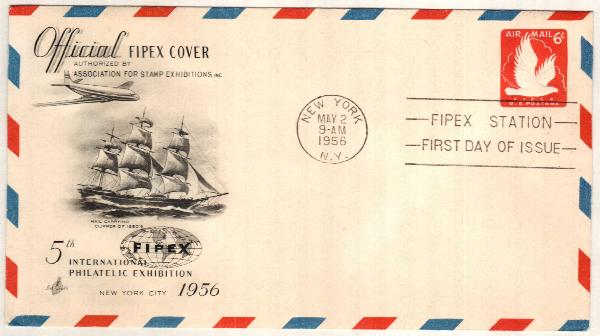 US #UC25 was issued on May 2 at the exhibition.

In all, there were 121 dealer booths and the US Post Office had its own 10,000-square-foot booth with 16 windows to accommodate lines up to 100 feet long. Among the most popular exhibits was the legendary 1¢ British Guiana stamp. This show also marked the first time the Smithsonian allowed its National Postage Stamp Collection to be placed on display outside of Washington, DC. Among the Smithsonian’s displays were a full imperforate sheet of 2¢ Columbians, a full frame of Roosevelt die proofs, large blocks of classic stamps, and several stamp sketches made by President Roosevelt.

The show came to a close on May 6, 1956, and was deemed a tremendous success.