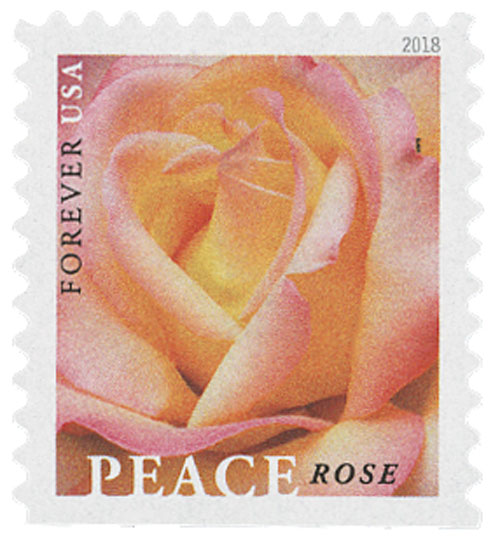 US #5280 pictures a close-up of a Peace rose. Click image to order.

French horticulturist Francis Meilland began developing the Peace rose in 1935, near Lyon, France.  He picked the 50 most promising seedlings from his seedbeds and spent the next four years watching how the plants developed.

Meilland was pleased with the roses he grew and shared them with friends and professional rose growers.  However, as World War II broke out, Meilland feared the impending German invasion of France and sought to protect his beloved flower.  He sent cuttings to friends in Italy, Turkey, Germany, and the United States.  Reportedly, the cuttings sent to America were on the last plane to leave France before the Nazi’s arrival. 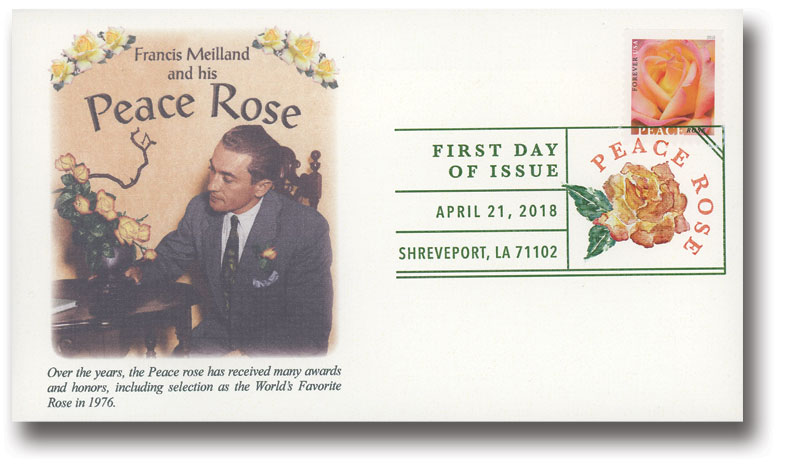 During the war, Meilland was unable to contact his friends, to know if they received their roses, or if they had survived.  It turns out, his friends did receive their cuttings and grew the roses in a variety of climates, finding that they were hardy, vigorous, and disease resistant.  Meilland’s friend in the US grew the roses in his own trial garden before sharing clippings with rose growers throughout the country to test them in all the climatic zones.  The roses proved resilient and it was decided that they should be released throughout the US and thousands of plants were propagated in preparation of being released for sale. 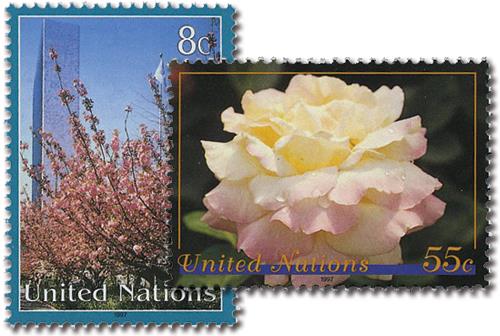 US #UN698-99 – The 55¢ stamp pictures a Peace rose, which grows in the rose garden at UN Headquarters. Click image to order.

The plants were first placed on sale in the US on April 29, 1945, in Pasadena, California.  In a special ceremony, two doves were released and the rose was named for the “world’s greatest desire: peace.”  Though they hadn’t known it would happen ahead of time, that same day Berlin fell and a truce was declared.

Soon, the Peace rose received the All American Award for Roses.  And at the first meeting of the United Nations in 1945, each of the delegates was presented a Peace rose in the hopes it would “influence men’s thoughts for everlasting world peace.”

During the war, the rose had gone by different names in different countries.  In France, Meilland initially named it after his mother, “Madame A. Meilland.”  His friends in Italy called it “Gioia” (Joy) and in Germany, it was called “Gloria Dei” (Glory of God).  However, the name Peace rose was the most lasting and within nine years there were 30 million Peace rose bushes growing around the world.

The Peace rose helped popularize gardening in the years that followed.  Because of all the attention it received, and the fact that it grew so well and so easily, it provided a huge boost to the rose industry.  It was also used to create hundreds of other varieties of roses – today most modern roses are descended from the Peace rose in some way.

After witnessing the popularity of his flower, Meilland once wrote, “How strange to think that all these millions of rose bushes sprang from one tiny seed no bigger than the head of a pin, a seed which we might so easily have overlooked, or neglected in a moment of inattention.”