Louisiana Admitted to the Union 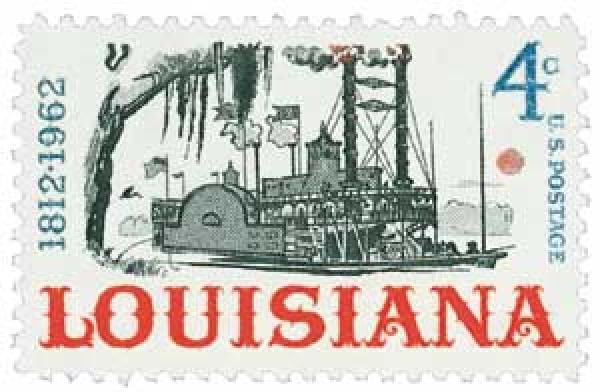 Although Indians lived in the lower Mississippi River valley as far back as 10,000 years ago, little evidence remains of their culture. The first organized society, called the Poverty Point site, may date as far back as 700 B.C.

In 1542, Spanish Explorer Hernando de Soto explored the region searching for gold. However, no gold was found in the area, and Spain made no further attempts at exploration. 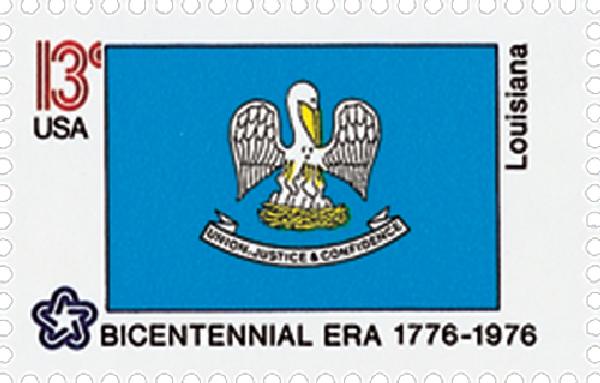 U.S. #1650 – The pelicans on the Louisiana state flag symbolize the waterways and harbors, which are the state’s lifeblood.

In 1682, nearly 140 years after de Soto’s journey, René-Robert Cavelier, Sieur de la Salle, led a group of French explorers on an expedition down the Mississippi River. When he arrived in the lower Mississippi valley on April 9, Cavelier claimed the entire region for France. The new territory was named Louisiana, after France’s King Louis XIV.

Cavelier’s group was unsuccessful at colonizing the area. Finally, in 1714, after years of failed attempts, the first permanent French colony in Louisiana was founded at Natchitoches. Unfortunately, the new colonists were not equipped to deal with life on the prairie and were unable to make Louisiana a financial success.

Even though Louisiana was growing in population, France was not satisfied with the amount of income it was producing. In 1762, France secretly ceded Louisiana to Spain. Many colonists were outraged at this decision. However, even after a group of colonists drove the Spanish governor from the colony, Spain still held a firm control. 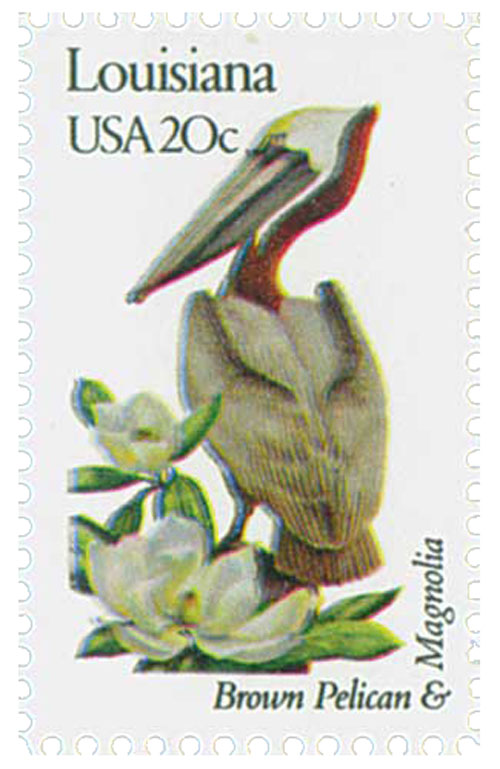 U.S. #1970 – The Louisiana State Bird and Flower – Brown Pelican and a Magnolia.

During the early days of Spanish rule, the English drove approximately 4,000 French out of Acadia, Canada. These refugees traveled down the Mississippi River and eventually settled in Louisiana. The ethnic group known as Cajun is descended from this group of settlers.

No actual Revolutionary War battles were fought on Louisiana soil. However, the colony did play an important role in the war effort. Spain allowed the Continental Congress to use the Louisiana port of New Orleans. Throughout the war, supplies were shipped from New Orleans to the struggling British Colonies. This pipeline played a major part in America’s victory over Great Britain.

Following the Revolutionary War, Louisiana’s economy flourished. Étienne de Boré invented a method of processing sugar on a large scale. This development allowed Louisiana to benefit from its abundance of sugar cane.

In the early 1800s, Napoleon Bonaparte sought to create a great French empire in the New World, so he reacquired Louisiana from Spain. The center of the empire was to be the nation of Hispaniola. Napoleon envisioned that the Mississippi Valley would be the trade center of the new empire, shipping food and supplies from America to Hispaniola. 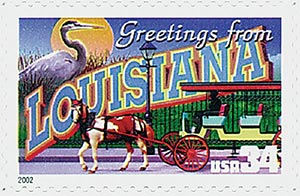 U.S. #3578 pictures a horse-drawn carriage, indicative of the French Quarter, and a great blue heron.

At this time, however, Hispaniola was in the midst of a slave revolt. This revolt had to be put down before French control could be restored. In an attempt to end the revolt, Napoleon sent a large army to Hispaniola. Although there were considerable French victories on the battlefield, many soldiers died from disease. Because of these heavy losses, Napoleon decided to abandon Hispaniola and, in turn, his dream of an empire in the New World.

With Hispaniola gone, Napoleon had little use for Louisiana. This, coupled with the fact that war was imminent in Europe and he couldn’t spare troops to defend Louisiana, caused Napoleon to offer the land for sale to the United States. This pleased James Monroe and Robert Livingston, who had been sent to France to negotiate for the port city of New Orleans and some surrounding regions. After a small hesitation, because there was no time to consult the President, the pair decided to purchase the larger territory for $15 million. The newly acquired land (which would some day make up all or part of fifteen states) doubled the size of the existing United States and guaranteed free navigation of the Mississippi River.

Once the purchase was complete, the issue of statehood arose quickly, as part of the purchase itself stated, “inhabitants of the ceded territory shall be incorporated into the Union of the United States and admitted as soon as possible.” However, the New Orleans Territory (as it was known) was starkly different from the rest of the states. It had a heritage based on French and Spanish traditions, unlike the eastern states that were largely steeped in British practices. 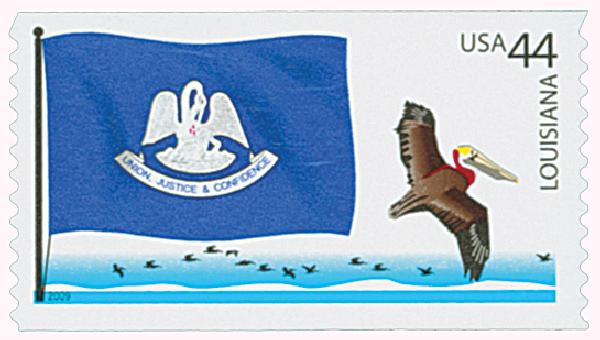 U.S. #4294 – Though the flag was adopted in 1912, the three drops of blood on the mother pelican were frequently omitted until it was made a requirement in 2006.

In 1810 the territory submitted its petition for statehood. After the Senate accepted it, they were ordered to hold a convention and draft a constitution. Border disputes drew out the process, but Louisiana was ultimately admitted to the Union on April 30, 1812.

The state, and New Orleans in particular, grew rapidly. New Orleans had the biggest slave market in the nation and was one of America’s wealthiest cities. With an economy so dependent on slavery, Louisiana was the sixth state to secede from the Union on January 26, 1861. Because of its major port city, New Orleans, and its location on the Mississippi River, Louisiana was an important target for Union attack. Through the duration of the war, the Union army gradually extended its control until it had a major portion of the state. Although there were few actual battles in Louisiana, there was great property destruction.

The turn of the century introduced a period of rapid economic growth for Louisiana. In 1879, engineers deepened the mouth of the Mississippi River, making it possible for larger, ocean-going vessels to dock at New Orleans. As New Orleans became more economically important, an extensive system of railroads was built. By 1883, New Orleans was connected by rail to every major city in the United States. The opening of the Panama Canal in 1914 also helped to increase commerce. 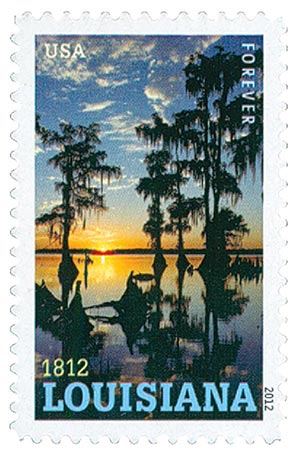 In 1901, oil was discovered in Louisiana; in 1916, natural gas was discovered. These two valuable natural resources helped the economic growth of the region even further. During World War II, Louisiana began building ships and manufacturing petrochemicals.

Louisiana’s economic growth continued after World War II. In 1961, the National Aeronautics and Space Administration (NASA) used the Michoud Ordnance Plant to manufacture the Saturn rocket. It was the Saturn V rocket that later boosted the Apollo 11 astronauts to the moon.

Today, Louisiana’s economy is based primarily on industry. Approximately two thirds of the people live in urban areas and work in factories. However, agriculture still plays an important economic role.