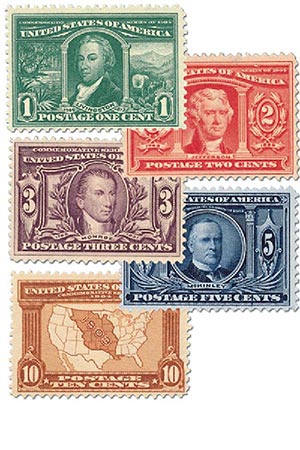 On April 30, 1904, the Louisiana Purchase Exposition opened to the public. That same day a set of five stamps commemorating the exposition and the purchase went on sale.

Also known as the St. Louis World’s Fair, this expo was held from April 30 to December 1 and commemorated the 100th anniversary of Thomas Jefferson’s Louisiana Purchase. The largest fair up to that time, it had over 1,500 buildings and 75 miles of roads and walkways. The fair’s opening ceremonies were presided over by President Theodore Roosevelt and Secretary of War William Howard Taft.

The fair also featured exhibits from 62 foreign nations and 43 of the 45 U.S. states. Over the course of the expo, more than 19 million people visited to see the sights. Many of the buildings remain in use today, including the St. Louis Art Museum and Administration Building of Washington University. 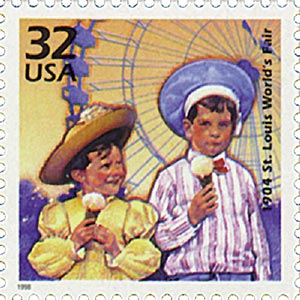 Americans were introduced to several new foods at the fair, including waffle ice cream cones, hamburgers, hot dogs, peanut butter, iced tea, and cotton candy. And the fair was the inspiration for the song “Meet Me in St. Louis, Louis,” which was later featured in the similarly titled film and musical Meet Me in St. Louis.

Notable visitors to the fair included John Philip Sousa, Thomas Edison, and Helen Keller. A fruit specialist introduced the phrase “an apple a day keeps the doctor away” at one of the lectures. The United States also hosted the Summer Olympic Games for the first time during the fair. However, with the events held over several months and in competition with the fair itself, many European athletes did not compete.

Promoters for this exposition lobbied for a Congressional bill to subsidize the cost of it. President William McKinley signed the bill, prompting the Post Office Department to consider commemorative stamps and the authorization of cancelling slogans to advertise the event. Five commemorative stamps were issued in denominations ranging from 1¢ to 10¢.

Robert R. Livingston is pictured on the 1¢ denomination. As his Minister to France, Thomas Jefferson sent Livingston (and James Monroe) to offer $2 million dollars to buy New Orleans and West Florida from France and Spain. But they couldn’t pass up a bigger bargain and purchased an area (for $15 million) that doubled the size of the United States. The Louisiana Purchase was Livingston’s most notable achievement. 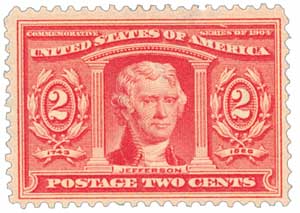 Thomas Jefferson is pictured on the 2¢ Louisiana Purchase commemorative stamp. Jefferson is remembered as our third President, but he was also a lawyer, legislator, educator, author, musician, inventor, mathematician, farmer, and statesman! He was very interested in westward expansion, but he worried about France and Spain’s possessions west of the Mississippi. When the time was right, he wisely took advantage of financial problems in France and bought the Louisiana Territory. 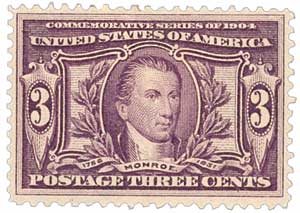 U.S. #325 was used with other stamps for heavy packages or mail sent to farther destinations.

James Monroe is pictured on the 3¢ Louisiana Purchase commemorative stamp. Monroe studied law under Thomas Jefferson and later helped Livingston to acquire the Louisiana Territory. He is most remembered as our fifth President and for the “Monroe Doctrine,” which profoundly influenced the foreign policy of the U.S. This doctrine insisted that Europe not interfere with the government of, or try to colonize, any other nation in the New World. 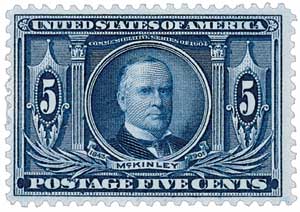 William McKinley is pictured on the 5¢ Louisiana Purchase commemorative stamp. Besides Jefferson, no other President has been as aggressive in acquiring new territories for the U.S. McKinley annexed Hawaii (realizing the importance of U.S. interests in the Pacific). And, he acquired from Spain the Philippines, Guam, Puerto Rico, and Cuba. An assassin shot him on September 6, 1901. Doctors did not believe his wound was serious, but he died on September 14. 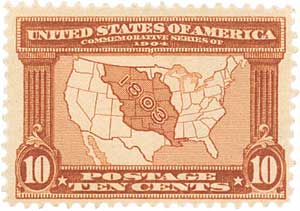 The 10¢ stamp illustrates a map of the U.S. with the Louisiana Territory superimposed. It makes obvious what a significant and dramatic step the Louisiana Purchase was. Some felt the Constitution was not explicit in authorizing such territorial acquisitions and claimed the purchase to be “unconstitutional.” Thomas Jefferson felt that since such actions were not expressly forbidden in the Constitution, they must be allowed.

Click here for images and programs from the fair and here for a booklet on the opening ceremonies.