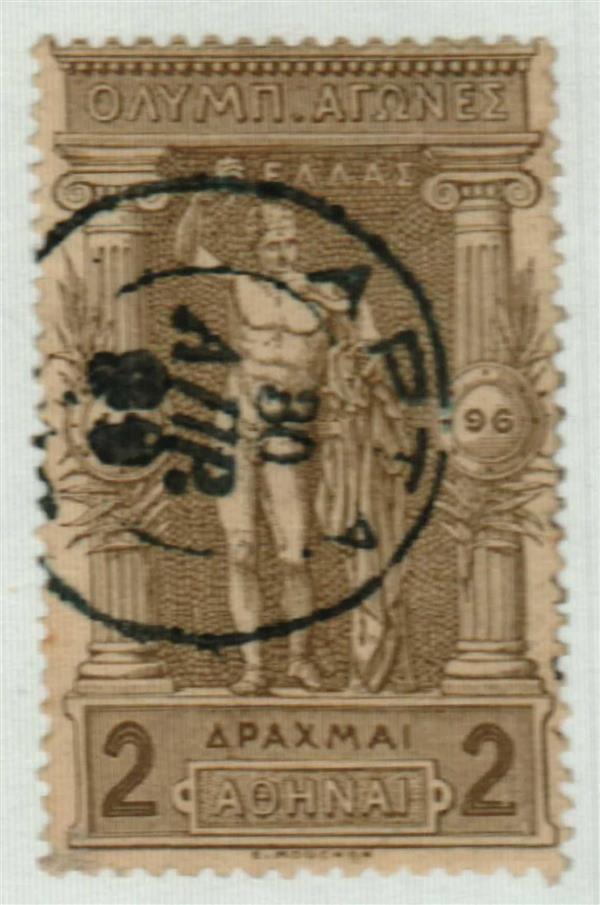 Greece #125 was issued in 1896 to promote the games and pictures statue Hermes of Praxiteles.

According to legend, Hercules founded the Olympic Games to honor his father Zeus. The earliest games began in 776 B.C. States were prouder of Olympic victories than of battles they won. Women, slaves, and foreigners weren’t allowed to participate. The first Olympic events were running contests. Boxing, chariot racing, and wrestling contests were added over time. Roman Emperor Theodosius I ended the games in 393 A.D. because he feared they had a pagan influence.

Centuries later, the French attempted to revive the games, holding L’Olympiade de la Republique (The Olympics of the Republic) between 1796 and 1798. Though that attempt failed to bring back the Olympics, France did play a key role in the Olympic revival.

A few decades later, young aristocrat Pierre de Coubertin lived in a  German-occupied area of France. Coubertin thought France was defeated by a “lack of vigor” rather than inferior military skills. He studied the education of German, British, and American children and concluded exercise and sports made people well rounded and vigorous. 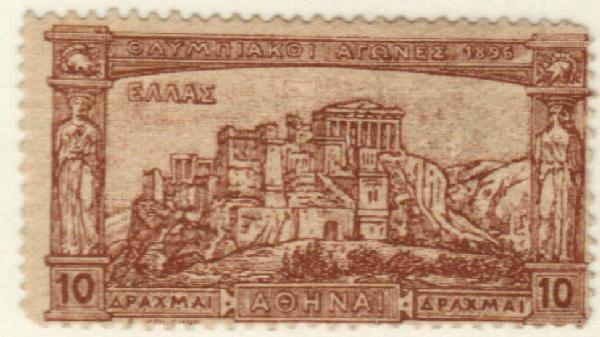 Greece #128, also issued in 1896, pictures the Parthenon, a temple dedicated to the goddess Athena.

By 1890, Coubertin had established a sports organization. And four years later he founded the first International Olympic Committee (IOC) and worked to revive the Olympic Games to promote peace and stability.

The Olympics Games opened in Athens on April 6, 1896. While there weren’t any national Olympic Committees to choose and sponsor athletes, Coubertin knew many European and American sportsmen. He convinced them to form national teams. Approximately 300 athletes representing 14 countries competed in 43 events. (In contrast, the 2012 Olympics featured over 10,000 athletes from more than 200 countries competing in 302 events.) 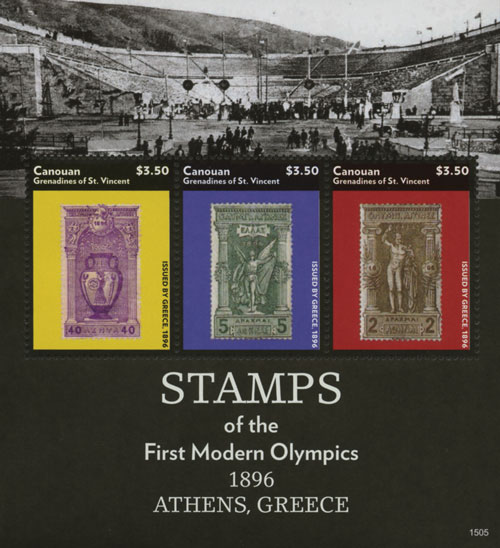 By April 10, the hosting Greeks had yet to win a track and field event. Their hopes lay in the upcoming marathon, a race invented for these Olympics. Thousands of years earlier, a largely outnumbered Greek force managed to defeat a superior Persian army. Legends say, following the victory, a Greek soldier named Pheidippides ran from that bloody plain of Marathon all the way to Athens, and proclaimed, “We were victorious!” as he died. The Battle of Marathon is considered one of the most important battles in the history of the world.

When the Olympic Games were revived in 1896, that famous run was revived as an Olympic event – the marathon. The distance of 26.2 miles represents the distance run by Pheidippides, and the race was named after the battle. Soon, another previously unknown Greek soldier would gain marathon glory.

Spiridon Louis was the son of a poor farmer who made a living as a water-carrier in Athens. He had served as a soldier in the Greek army. The qualifying runs were organized by Louis’ former commanding officer, Papadiamantopoulos, who convinced Louis to qualify for the event.

With only five miles to go, the lead was held by an Australian. The crowd at the stadium groaned when they heard the news, fearing another Greek defeat. Louis, meanwhile, stopped along the way at a local inn for a glass of wine! He declared he’d still catch up to the rest of the runners. He steadily gained ground, until the Australian runner collapsed from exhaustion, only a couple of miles from the finish line. As the runners approached the area, it was Louis who entered – alone. The Greek crowd erupted into cheers. Greek Crown Prince Constantine enthusiastically joined him for the final lap, and the first marathon race was won by a Greek – just as the original had been. 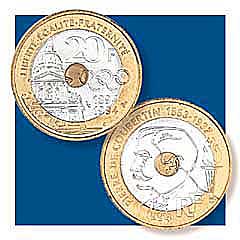 When the games ended on April 15, the Greeks had the most medals, with 46, though the Americans had one more gold, with 11. Ten of the 14 participating nations received medals. German wrestler and gymnast Carl Schuhmann was considered the most successful athlete of the games, winning four events.

The first modern Olympics proved to be immensely popular. Before the games were even held a second games were already slated for Paris in 1900. And the tradition of Summer Games every four years continues to this day, in addition to winter games, Paralympics, Deaflympics, and a variety of other Olympic-inspired athletic events.

Click here to browse photos of the 1896 Olympics and here to see stats, videos, and more from those first games.