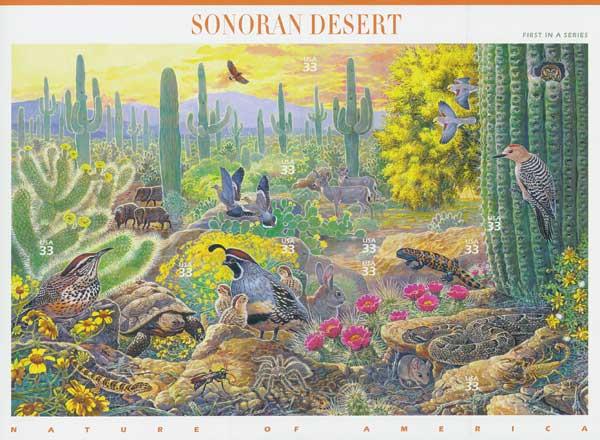 Before settling on Nature of America, the U.S.P.S. discussed issuing a set of four American desert stamps, based on the popularity of the 1981 Desert Plants stamps. Over time, the concept for the stamps evolved into a set of six stamp sheets depicting six ecosystems found in America.

U.S.P.S. art director Howard Paine suggested the stamps all use artwork by John D. Dawson, who’d previously worked on the 1988 American Cats, 1990 Idaho Statehood, and 1998 Flowering Trees stamps. They believed it was important for the same artist to create the artwork for all the stamp sheets, so they’d look like a set. 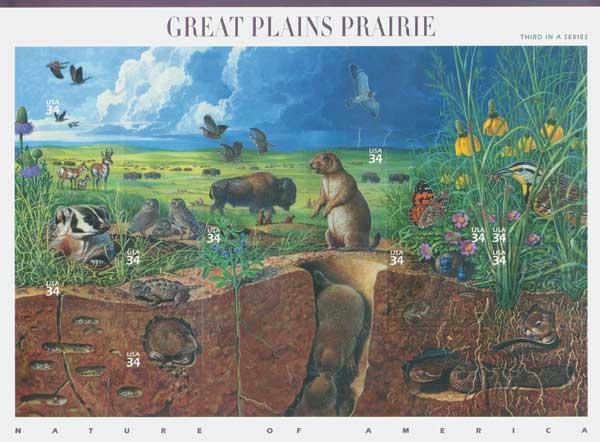 Some of the design inspiration for these stamps came from the 1997 World of Dinosaurs issue. The Dinosaurs sheet featured a panoramic view with perforations punched into the ungummed sheet. While they liked the idea of picturing a larger scene, the team didn’t want to use the punched perforations, because it would distract from the design. Instead they opted for the self-adhesive format with serpentine die cutting for each stamp. These stamps would be the first U.S. self-adhesive issues designed as one large scene.

The result is a stunning sheet with 10 stamps, each including one or more species found in that region. Outside of each stamp there are additional plants and animals, so the sheets actually picture 20 to 30 different species. Plus, the back of each sheet includes an outline of the artwork and identification for all the plants and animals.   Click here to see the back of the Sonoran Desert sheet. 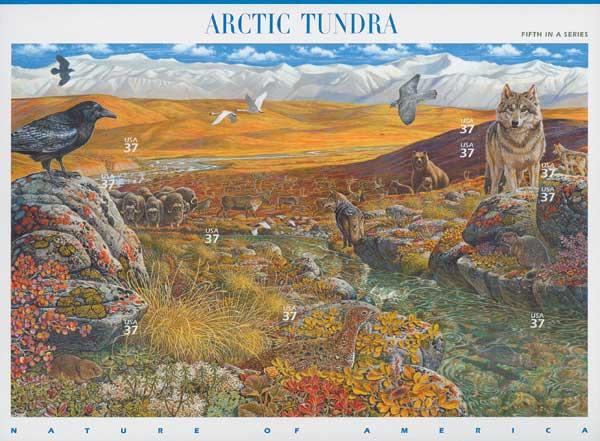 While the scene pictured on each sheet came from Dawson’s imagination, it was thoroughly researched. He used photos as references for each creature and worked closely with scientists to ensure he pictured all the species interacting in a realistic way on every sheet.

The first sheet in the Nature of America series was issued on April 6, 1999. Picturing the Sonoran Desert, its first day ceremony was held at the Arizona-Sonora Desert Museum in Tucson, Arizona. According to a U.S.P.S. representative at the ceremony, “these stamps will help promote a greater appreciation for the diversity and beauty of our desert lands, and serve as a nature lesson for the enjoyment of young and old alike.” Among the ceremony’s participants were some of the animals pictured on the new stamps. 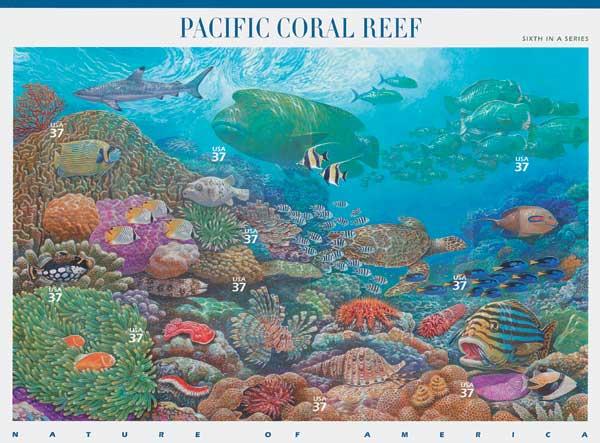 The Sonoran Desert and the other five planned Nature of America sheets proved to be so popular, the series was extended to include six more ecosystems. One sheet was issued each year from 1999 until 2010.

Click any of the images above or below to learn more about the stamps and regions they picture. And click here to get the complete set of 12 Nature of America sheets.