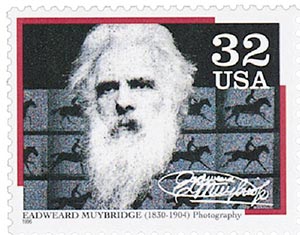 US #3061 from the Pioneers of Communication issue.

Photographer Eadweard Muybridge was born on April 9, 1830, in Kingston upon the Thames, Surrey, England.

His name at birth was Edward James Muggeridge, but he adopted the name Eadweard Muybridge, which he believed was the proper Anglo-Saxon form of his name. After finishing his schooling in England, Muybridge decided to travel to the United States when he was 20.

After arriving in New York City, Muybridge settled in San Francisco in 1855, where he worked as a bookseller and publisher’s agent for the London Printing and Publishing Company. In 1860, Muybridge was badly injured in stagecoach crash in which he was ejected from the vehicle and hit his head. During his recovery in England, Muybridge became interested in photography. He also received two patents, one for printing-making techniques and another for washing clothes. 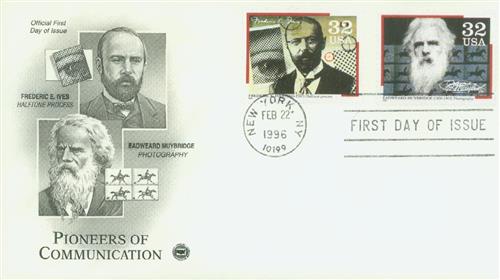 By the time Muybridge returned to San Francisco in 1867, he was a professional photographer, with a particular focus on landscape and architecture. He transformed a lightweight carriage into a portable darkroom and his photographs were sold in galleries. Muybridge’s big break came in 1867 when he photographed Yosemite Valley and areas around San Francisco.   In 1868, Muybridge visited Alaska and photographed the Tlingit Native Americans and sweeping landscapes for the US government. And in 1871, the Lighthouse Board tasked him with photographing the lighthouses of the West Coast. Two years later, the Army hired him to photograph the Modoc War. Around the same time, he also used time-lapse photography to capture the construction of the San Francisco Mint. 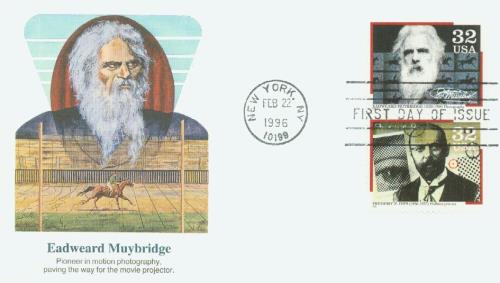 Muybridge began experimenting with photographing motion when railroad magnate and former California Governor Leland Stanford hired him to prove that at a certain point in a horse’s gallop, all four of its legs are off the ground. To capture images of a running horse, Muybridge used a series of 12 to 24 cameras, which were triggered by strings – the horse broke the strings as it ran by, thus taking the horse’s picture at various stages of its stride. His first attempts failed because his camera lacked the fast shutter speeds needed. By 1877, Muybridge had developed a high-speed shutter with an exposure time of 2/1,000 of a second. The experiment worked, and the resulting photographs proved Stanford was right! Click here for a video made from his photographs. 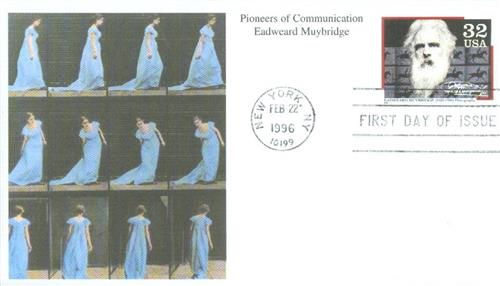 To display his pictures, Muybridge invented the zoopraxiscope – a lantern that projected images on a screen in rapid succession from photographs printed on a rotating glass disc. The spinning of the disk gave the pictures the illusion of movement.

In 1872, Muybridge killed a man that he believed to have fathered a child with his wife. His lawyer claimed insanity, brought on by his previous head injury, and Muybridge was ultimately acquitted. Shortly after, he went on a nine-month photography trip to Central America. In 1882 he returned to England to lecture at the Royal Institution. Also in the 1880s, the University of Pennsylvania hired Muybridge to use his techniques to study people in a studio and animals in the Philadelphia Zoo. 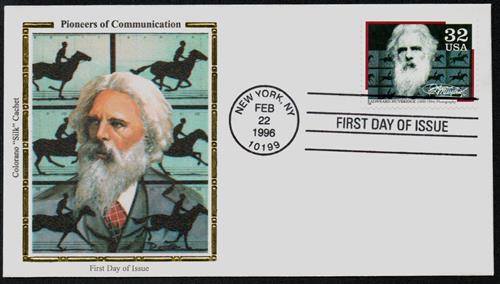 Muybridge toured and lectured extensively in the late 1800s, including a presentation at the World’s Columbian Exposition. He returned to England in 1894 and died there on May 8, 1904.

Facebook
This entry was posted in April 2018, This Day in History. Bookmark the permalink.
Click here to cancel reply.