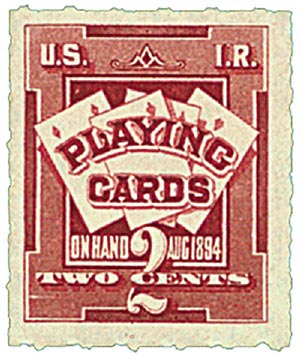 On August 1, 1894, a tax was imposed on playing cards as part of the Wilson Bill.

Certain luxury items, including Playing Cards, were first taxed in 1862.  The tax was levied to help fund the Union’s Civil War effort.  The tax rate structure was based on five different levels depending on the cost of the pack of cards.  No consideration was given to the number of cards in the deck, and opening the pack usually destroyed the revenue stamp.

The Playing Cards stamps were the result of Schedule Co of the 1862 Revenue Act.  This section of the law also included items such as medicines and perfumes. Schedule C stamps accounted for about 74 percent of all Revenue stamps sold but brought in less than half of the revenue.  In 1863, they generated almost $300,000 in revenue.  This increased to over $4 million by 1870.

As with all First Issue stamps, the law required Playing Cards stamps to only be used on packages of cards.  In fact, a $50 fine was to be issued for any misuse of the stamp.  Shortly after the first stamps were issued in October 1862, the Internal Revenue service realized it was unrealistic to produce all those stamps and expect each revenue collector to have them on hand at all times.

The law was changed in December of that year. After that time, any stamp could be used on a taxable item as long as the denomination was correct.  There was an exception to the new ruling though, the new provisions were not to apply “to any stamp appropriated to denote the duty charged on proprietary articles.”  This meant proprietary stamps, including Playing Cards stamps, could not be used on documents.  However, that rule was often disregarded without penalty.

Private companies were also permitted, at their own expense, to produce their own stamps.  These private die stamps featured the names of the companies as part of their designs. 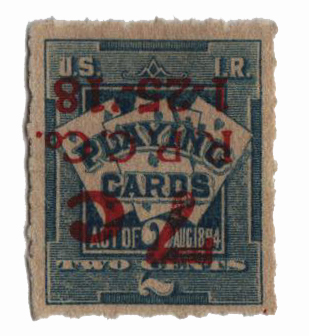 US #RF10a has an inverted surcharge.

Playing Card stamps were produced until 1871, after which point other Revenue stamps were used in their place to show the tax had been paid.  Then 23 years later, Congress passed the Tariff Act of 1894, “to reduce taxation, to provide revenue for the Government, and for other purposes.”   The act went into effect on August 1, 1894.  Also known as the Wilson Bill, the act called for the creation of new playing card stamps.  The stamps were overprinted with the initials of the manufacturers: 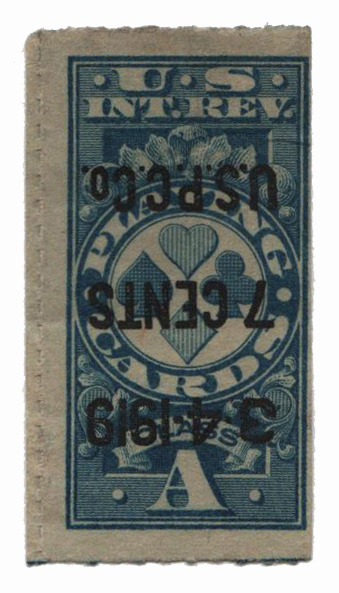 For the first 45 years, stamps were issued with the standard denominations (1¢, 2¢, etc.).  Beginning in 1940, playing card stamps were issued per pack.  Instead of a denomination of 1¢, the stamps showed one pack.  This change meant the tax rates could change without having to reprint or surcharge the new stamps. 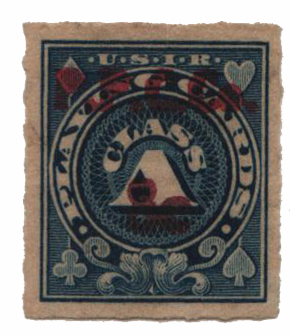 One tax stamp was required for every 54 cards in a deck (the 52 cards and two jokers).  So a regular deck of 64 Double Pinochle cards would require two stamps, while a box of two Double Pinochle decks (which contained 128 cards) needed only three stamps.

The initial tax rate when these stamps were first issued in 1940 was 11¢ per pack. That rate increased to 13¢ the following year and remained the same until the playing card tax was ended on June 22, 1965.  Even after the tax on playing cards was revoked in 1965, companies continued to produce their own stamps to seal the decks. 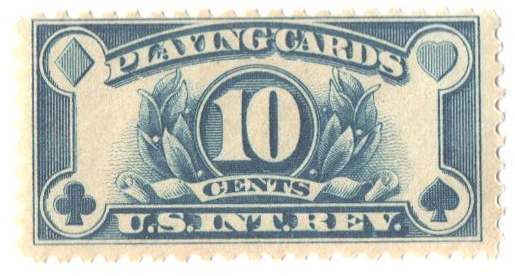 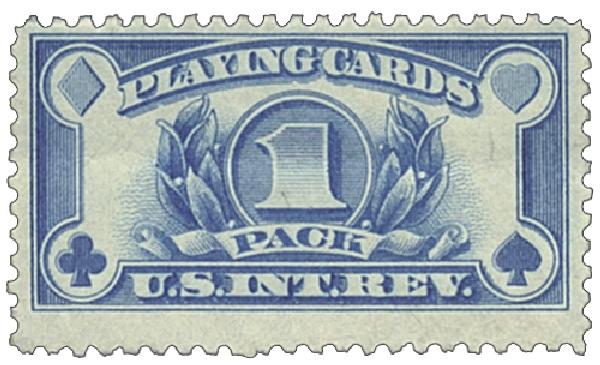