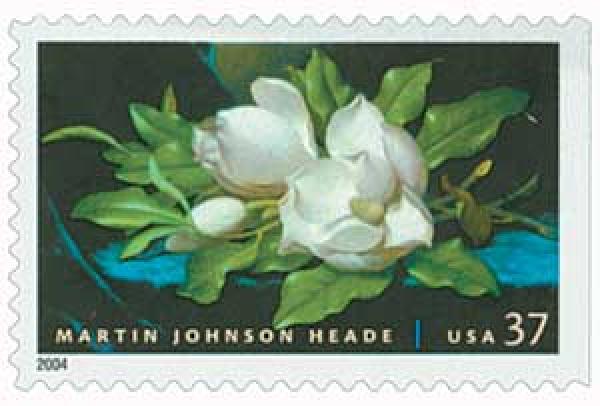 The son of a shopkeeper, Heade got his first training from nearby folk artist Edward Hicks.  Heade’s first known painting was a portrait he made in 1839. He lived in Rome, Italy, for two years to continue his training.

When he returned to the states, Heade had his first exhibit at the Pennsylvania Academy of Fine Arts.  After another trip to Europe, he settled in New York, where he exhibited his work at the National Academy of Design. 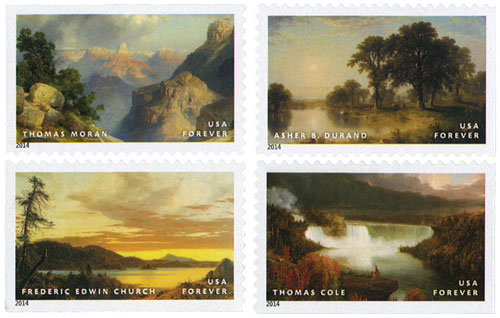 US #4917-20 pictures paintings from the Hudson River School.

At the studio Heade rented in New York, he came in contact with landscape painters of the Hudson River School who influenced his work.  He focused on the effects of light and the mood of a scene rather than portraying it true to the landscape he was painting. Heade is sometimes considered to be part of the Hudson River School of artists, but that is disputed among art historians and scholars.

Heade’s love of nature led him to specialize in seacoast and marsh landscapes and floral still lifes.  He painted marshes at dawn and at sunset and under clear and threatening skies.  Once he was satisfied with the look of a haystack or a flower, he would repeat the figure again and again in other paintings. 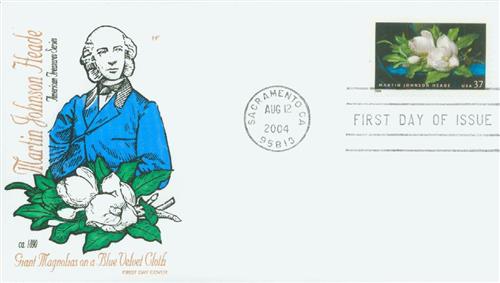 Fascinated by hummingbirds, Heade traveled to Brazil in 1863 to paint the South American species, as well as the native orchids, passionflowers, and ferns.  He visited other South American countries and continued to paint the wildlife and plants he observed there. 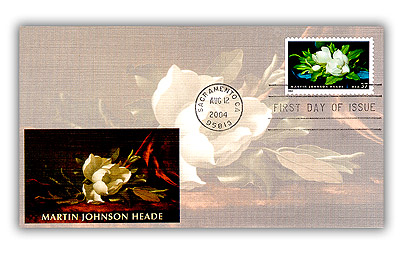 After returning to the US, Heade moved to Florida in 1883.  In addition to painting the subtropical landscapes, he was enchanted by the magnolias, orange blossoms, and other flowers in Florida and produced 17 paintings of the Magnolia grandiflora, the best-known American magnolia.  Many works featured magnolia blossoms laid on velvet.  Decades earlier, the artist had painted flowers, but those were often arranged in vases.  By the time of his death, Heade had painted an extensive number of still lifes and landscape works.

During Heade’s lifetime, his works were not well known.  After World War II, American art produced during the 19th century became popular again and collectors realized his skill.  At this time, forgers copied his work.  The fakes were easy to spot because it takes decades for oil paints to completely dry.

Heade had the longest career and possibly the most varied body of work of any American painter of the nineteenth century. He died in St. Augustine on September 4, 1904. 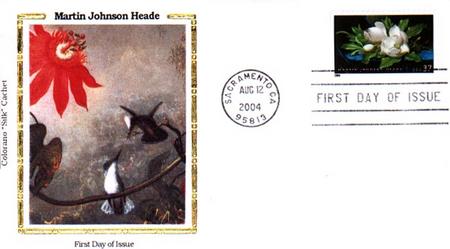 The USPS issued the stamp above one day after Heade’s 185th birthday.  The painting on the stamp is currently in the collection of the National Gallery of Art.  It’s considered one of his best works.  According to the museum, “Certainly works such as Giant Magnolias on a Blue Velvet Cloth, with their striking contrasts of brilliantly lit flowers and leaves set against a dark background, are among the most original still lifes of the nineteenth century.”

Click here to view a large collection of Heade’s paintings.