Opening of the Panama Canal

U.S. #856 pictures President Theodore Roosevelt, who was one of the major proponent’s of creating the canal, as well as George Washington Goethals, the project’s chief engineer.

After a decade of construction, the Panama Canal opened to traffic on August 15, 1914.

For centuries, explorers, kings, and capitalists sought a way to cut their shipping times by cutting through the isthmus of Panama. In 1903, the United States helped Panama declare its independence from Colombia. President Theodore Roosevelt saw the creation of a canal across Panama as vital to America’s role as a global power. The following year began construction on the Eighth Wonder of the World – the Panama Canal. Roosevelt was so vested in the project that he visited the work site – making him the first sitting president to leave the continental U.S. during his term. 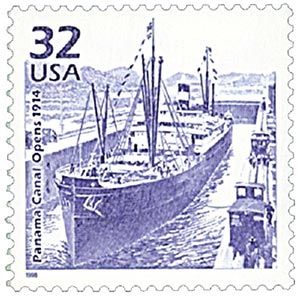 The construction was an arduous undertaking, costing the U.S. $375 million and 5,600 lives. Over the course of the 10-year project, over 75,000 people from the U.S., Barbados, Martinique, Guadeloupe, and other nearby islands braved the harsh conditions to help make the canal a reality.

A grand celebration was to be held on August 15, 1914, to celebrate the official opening of the Panama Canal. A fleet of international warships was to assemble off Hampton Roads, Virginia. From there, they would travel through the Panama Canal to San Francisco for the Panama-Pacific International Exposition.

However, World War I intervened. The grand opening was a modest affair. There were no international dignitaries in attendance, although Colonel Goethals (pictured on U.S. #856) watched from a railcar as the cement-carrying American steamship SS Ancon traveled the canal.