American Victory at the Battle of Bennington 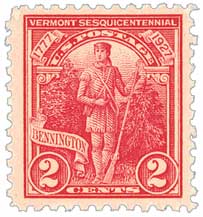 U.S. #643 – This Vermont sesquicentennial stamp pays tribute to the Green Mountain Boys that participated in the Battle of Bennington, though it wasn’t actually fought in that state.

On August 16, 1777, American troops won the Battle of Bennington – though the battle didn’t actually take place in Vermont.

In 1777, British General John Burgoyne’s Saratoga Campaign pushed through New York to Fort Edward, with the goal of capturing Albany and then New York City. However, the farther south he traveled, the longer and less secure his supply lines were. Burgoyne was told that American storehouses in Bennington, Vermont, were poorly defended and sent Lieutenant Colonel Friedrich Baum to capture them.

However, Burgoyne had been misinformed. John Stark and his 1,500 New Hampshire troops, as well as Seth Warner and a small Vermont militia, were stationed in Bennington. Following a brief encounter with an American scouting party, Baum set up camp on a hill five miles from Bennington waiting for an American attack.

U.S. #1348 – Historians believe the Bennington flag wasn’t actually carried at the battle, but was created years later as a commemoration for one of the soldiers.

Stark launched an attack at 3 p.m. on August 16. Upon sight of the British army, Stark called out “There are your enemies, the Red Coats and the Tories. They are ours, or this night Molly Stark sleeps a widow!” Many of Baum’s Native American, Canadian, and Torie allies quickly fled, while his dragoons remained. The Americans took the hill in two hours, just as Hessian reinforcements arrived to aid the British. But a Vermont militia rode in at the same time and prevented their advance.

The American victory at Bennington drastically reduced Burgoyne’s forces. This allowed for another American win at the Second Battle of Saratoga two months later – a major turning point of the Revolution.