Birth of Frédéric A. Bartholdi 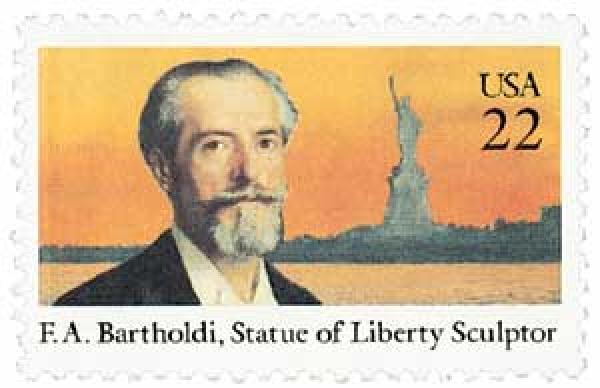 US #2147 had been intended for Bartholdi’s 150th birthday, though it was issued a year later.  It was also issued a year before the centennial of the Statue of Liberty.

Frédéric Auguste Bartholdi, the designer of the Statue of Liberty, was born on August 2, 1834, in Colmar, France.

After Bartholdi’s father died in 1836, the family moved to Paris, where they had relatives.  They would return often to Colmar, however.  Bartholdi received an extensive education – studying drawing with Martin Rossback, sculpture with Antoine Étex, and architecture with Henri Labrouste and Eugéne-Emmanuel Viollet-le-Duc. 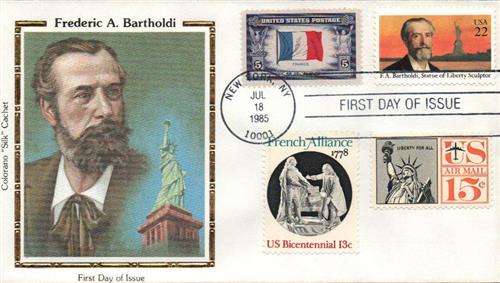 After graduating from the Lycée Louis-le-Grand in 1852, Bartholdi studied architecture and painting.  However, he soon grew interested in sculpture, which would become his main artistic focus.  After his work was accepted into the Paris Salon, he was hired to sculpt a memorial in his hometown of Colmar.  In 1855 and 1856, Bartholdi visited Yemen and Egypt with several painters.  The trip marked the beginning of Bartholdi’s interest in very large sculptures. 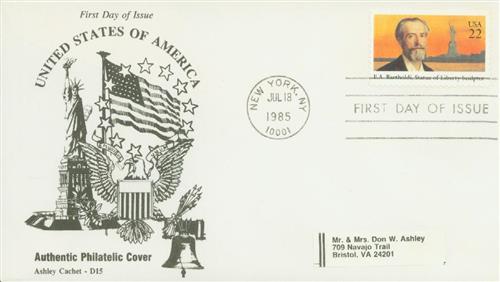 In 1870, Bartholdi served in the Franco-Prussian War under Giuseppe Garibaldi.  During that conflict he helped defend Colmar against German attacks.  After the war, he worked on a number of statues honoring French heroes. 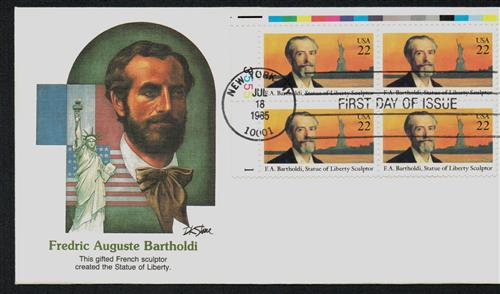 Prior to the war,  Bartholdi’s friend Edourd de Laboulaye had pitched the idea of creating a monument to give to the United States.  The gift was meant to commemorate France and the United States’ alliance during the American Revolutionary War.  At the time, Bartholdi was working on a bust of Laboulaye and was chosen to be the artist to create the monument. Laboulaye and Bartholdi collaborated to come up with a way to promote the idea of liberty without also promoting violence and revolution.  In the 19th century, the concepts were usually seen together.  In the end, they decided on a noble figure lighting the way, rather than leading the fight. 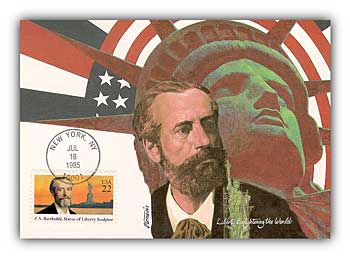 In 1871, Bartholdi traveled to the US to present the idea of the sculpture as a gift from France in celebration of 100 years of American independence.  It was agreed that France would pay for the statue and the United States would fund the pedestal.  The Franco-American Union was formed in France to raise the money to build the Statue of Liberty – over one million francs.  In 1875, Bartholdi met with President Ulysses S. Grant regarding the location of the Statue of Liberty once it was completed.  Grant suggested Bedloe’s Island in New York City’s harbor. 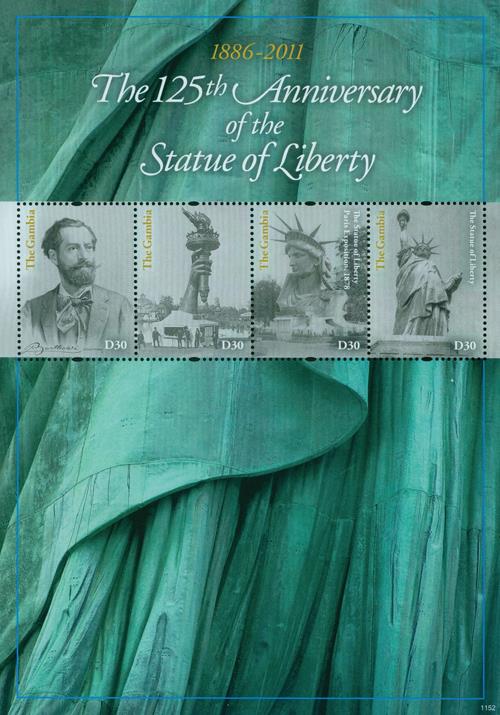 Item #M10962 was issued for the Statue of Liberty’s 125th anniversary and includes a stamp picturing Bartholdi.

The Statue of Liberty’s construction began in France in 1876.  Bartholdi originally hired Viollet-le-Duc to be the statue’s engineer, but he died partway through the project.  Alexandre-Gustave Eiffel stepped in to complete the project.  He became famous for the techniques used to overcome the various challenges of the statue’s construction.  Eiffel created a 98-foot inner support system for the statue.  The iron framework would hold most of the statue’s weight and remove unnecessary strain from the external structure.

Completed in 1885, the Statue of Liberty was deconstructed in Paris before being shipped to America aboard the French steamer Isère.  After arriving in America, it sat in storage for a year waiting for the pedestal to be completed.  After many long years of waiting, the statue of Liberty Enlightening the World was officially revealed to the public on October 28, 1886.  Thousands attended the ceremony, and New York Harbor was full of people trying to get a closer look at the monument.  Fireworks lit the night sky as Bartholdi – standing up on the balcony of the statue’s torch – pulled a rope that removed the French flag covering the Statue of Liberty’s face.

US #2224 was a joint issue with France honoring the statue’s centennial.  Click this image to find the France stamp as well.

Historians debate who Liberty’s face is modeled after, but it’s likely one of two women.  Some believe it was Isabella Eugene Boyer, the recently widowed wife of Isaac Singer, creator of the Singer sewing machine.  Others believe the statue was modeled after Bartholdi’s mother, Charlotte Bartholdi.  Standing 305 feet tall, the Statue of Liberty was the tallest statue in the world at the time of its completion.

Bartholdi also created a number of other statues and monuments in the United States.  These include works in Boston, New York City, Washington, DC, and more.  Bartholdi also participated in the 1876 Philadelphia Centennial Exposition (winning a bronze medal for one of his sculptures) and the 1893 Columbian Exposition.  He died from tuberculosis on October 4, 1904.

Click here for stamps honoring the Statue of Liberty.

Click here to view many of Bartholdi’s statues and other works.