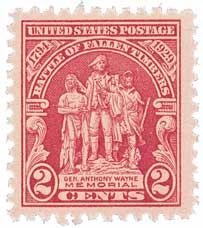 When the Treaty of Paris was signed in 1783, there were no Native American representatives at the negotiations. So, they were left out of consideration when Britain ceded the Northwest Territory to the U.S. 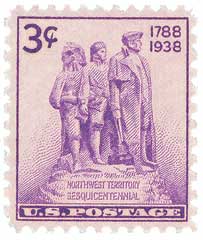 U.S. #837 pictures the Colonization of the West statue, located in Marietta, Ohio.

As the threat worsened, Washington commissioned General Anthony Wayne to lead an army to deal with the Western Confederacy. This brilliant tactician had earned the name “Mad Anthony” Wayne through his acts of reckless courage during the Revolutionary War.

After studying the results of previous battles, Wayne discovered the U.S. failure was likely due to poor training and leadership. Wayne put together and trained his army, and on August 20, 1794, they faced the Native American leader “Little Turtle” and his ally “Blue Jacket.” 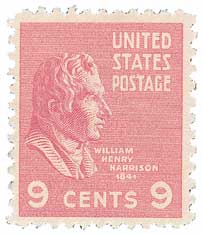 U.S. #814 – William Henry Harrison received a commendation for his role in the battle. 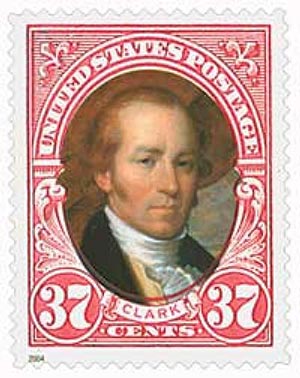 In Europe, John Jay had been trying to negotiate a treaty to convince the British to abandon their forts in the Northwest Territory completely. Wayne’s victory helped move the treaty along. A year after the Battle of Fallen Timbers, Wayne and “Little Turtle” signed the Treaty of Greenville, handing over the Ohio Territory to the United States. Wayne had succeeded in putting an end to Native American hostilities toward white settlers.