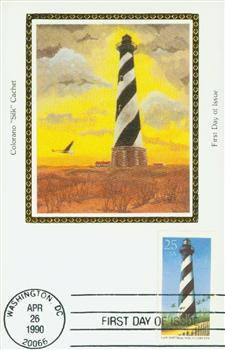 Northern businessmen grew frustrated with the loss of goods due to raiders and pressured the Union Secretary of the Navy Gideon Welles to do something.  Welles’ plan was to sink old ships in the inlets to make them impassable.  Commander H.S. Stellwagen was sent to purchase the vessels.

Naval Flag Officer Silas H. Stringham was put in charge of blockading the Outer Banks.  He did not agree with the plan to sink the ships.  Being an experienced sailor, he felt the currents would wash the ships away or quickly create a new inlet.  Stringham realized the Union had to control the area, which meant capturing the forts.  He requested help from the Army for what would be the first combined sea and land operation in US military history. 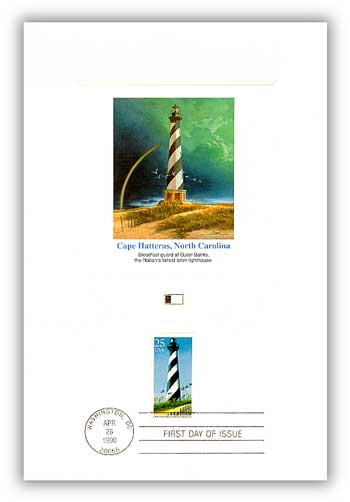 Benjamin F. Butler was a major general in the Army charged with assembling 800 men to travel with the Navy and attack the forts by land.  The men boarded the two ships Stellwagen had purchased to sink in the inlet.

On August 26, 1861, the ships left Hampton Roads, Virginia, and sailed down the coast.  The two forts protecting Hatteras Inlet had only twenty guns and fewer than 600 men between them.  If reinforcements were needed, they would have to come from the under-manned forts nearby or the mainland.

As the sun rose on August 28, the Confederate soldiers in Fort Clark woke to the sounds of cannon fire from three Union warships.  Rather than being anchored, as was routine at the time, the ships kept moving, making it hard for the men in the fort to train their guns upon them.  The ships drew close to fire, quickly moved away to reload, before returning for another round.  The scarce ammunition from the fort was wasted on shots that consistently missed the ships.  By 12:20 p.m., the Confederates ran out of ammunition, abandoned the fort, and fled to Fort Hatteras for safety. 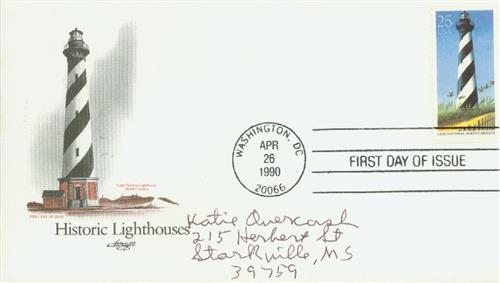 While the Union warships bombed the fort, Butler’s soldiers attempted to land approximately three miles away.  About 300 men were able to get on shore before the water became too rough and boats returned to deeper water.  Colonel Max Weber commanded the troops, which arrived at Fort Clark as the Confederate soldiers were fleeing.  The boats continued to bombard the fort, unaware that it had changed hands.  The firing stopped after the Stars and Stripes were spotted. 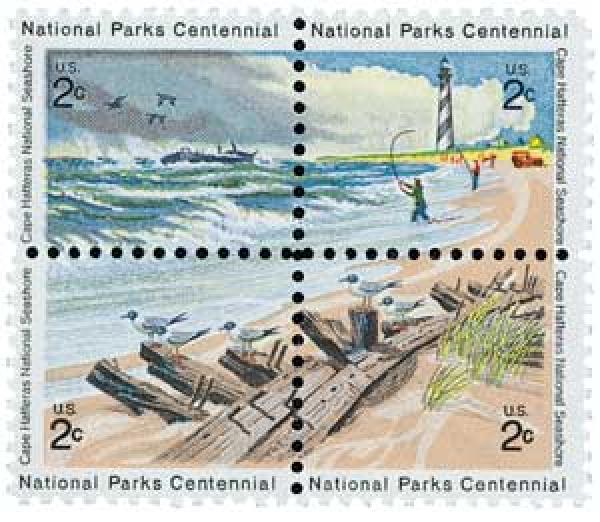 US #1448-51 was issued for the 100th anniversary of the creation of Yellowstone as America’s first national park.  It pictures Cape Hatteras National Seashore.

With Fort Clark secure, Stringham aimed his guns at Fort Hatteras.  After a few rounds, the waters became rough again and ships moved deeper.  During the night, Confederate reinforcements from Fort Ocracoke arrived by boat.  There were now about 700 men in Fort Hatteras, and more were expected.  When morning came on August 29, the weather had cleared and the Union Navy resumed its attack.  Wet gunpowder prevented the Confederate soldiers from returning fire though.  After a few hours, commanding officer Samuel Barron surrendered unconditionally. 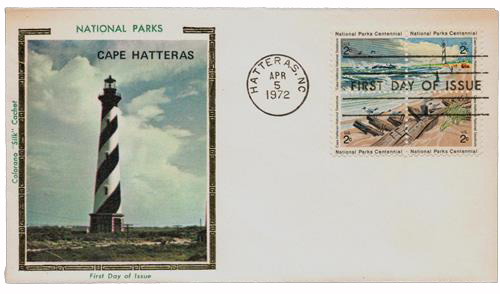 The capture of Forts Clark and Hatteras were significant for the Union cause.  Coming a month after the defeat at the First Battle of Bull Run, it boosted the morale of the North.  Having control of the Outer Banks put an end to the raiders who had hidden in the area.  The following year, the inlet was used to access the inland during Union General Ambrose E. Burnside’s North Carolina Expedition.