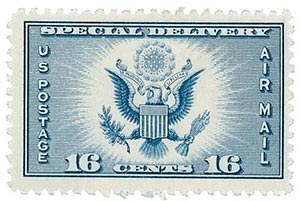 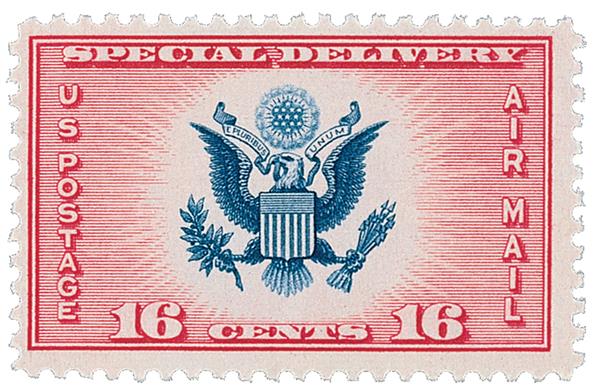 President Franklin D. Roosevelt, who was an avid collector, designed the stamp. Its first day of sale was August 30th, at the convention of the American Air Mail Society in Chicago. Two years later, the stamp was reprinted using two colors – carmine and blue. 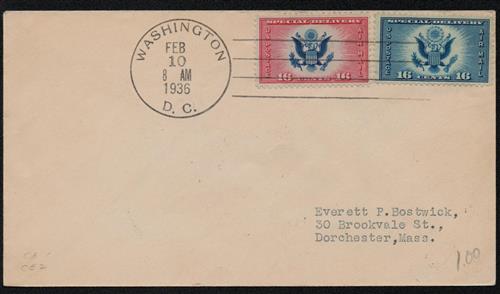 U.S. #CE1 was part of the “Farley’s Follies” debacle of the 1930s. Starting in 1933, Postmaster General James Farley had sheets of newly produced stamps removed before they were gummed and perforated. He gave them to President Roosevelt and other high-ranking officials. Collectors protested – these were specifically made rarities that were not available to the public! On February 5, 1935, the problem was solved. All the stamps issued since March 4, 1933, were re-issued in imperforate, ungummed condition in such quantities as the public required. 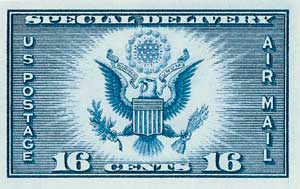 U.S. #771 was the last of Farley’s Follies. It has the exact design and color of #CE1, and paid the extra fees on Airmail Special Delivery. The stamp was sold at the Philatelic Agency for only two months. The difference between U.S. #771 and the original “Folly” version (the stamps given as gifts to Roosevelt and others), is that the normally issued stamp is imperforate.