Posted on December 2, 2017 by MysticStamp

Construction on the U.S. Capitol Building began in 1793, when George Washington laid the cornerstone. The most famous part of the Capitol is the dome. The first one, erected in 1824, was made of wood covered with copper. Within 30 years, the building had expanded so much the dome was small in proportion. When congressmen saw sketches of a proposed cast-iron dome, they immediately appropriated the money for its construction. 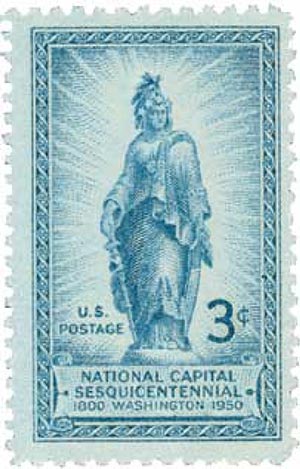 These plans included the monumental Statue of Freedom at the very top of the dome designed by Thomas Crawford. The statue was originally designed in 1855 as wearing a “Phrygian” cap – a historic symbol of freedom from slavery. But Jefferson Davis, then Secretary of War and in charge of the construction of the statue, strongly objected. He felt the use of the cap was a commentary against the practice of slavery in the South. 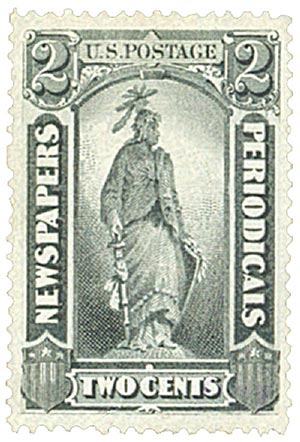 U.S. #PR9 – The Statue of Liberty was featured on several Newspaper & Periodical stamps.

Davis, who later became the President of the Confederacy during the Civil War, supported slavery. The Phrygian cap arose from the ancient Roman tradition of slaves who won their freedom being allowed to wear the cap. Davis did not want any symbol of slaves desiring freedom, and ordered the design changed. He refused to allow work to proceed until it was.

Montgomery Miegs, the supervising engineer of the project, told Crawford, “Mr. Davis says that he does not like the cap of Liberty introduced into the composition because American Liberty is original and not the liberty of the free slave.” Crawford changed the design to a Roman helmet with eagle feathers – which from a distance has often been confused with a Native American headdress. 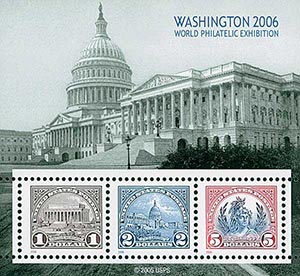 Construction of the dome was incomplete when the Civil War began in 1861. Although resources on both sides of the conflict were strained, President Abraham Lincoln insisted the work continue as a symbol of American unity. Nearly 9 million pounds of ironwork was used to build the famous Capitol dome. 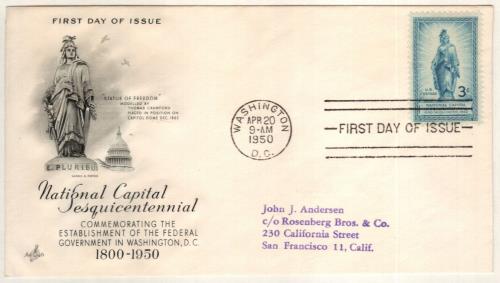 After eight years of construction and $1 million (ten times the original amount allocated), the dome was complete. On December 2, 1863, the Statue of Freedom was placed on top of the dome. Fanfare included a 35-gun salute – one for every state of the divided Union – and a return salute from 12 forts surrounding Washington, DC. The pageantry, and the Statue of Freedom, was visible from nearby Virginia – the seat of the Confederate States of America. 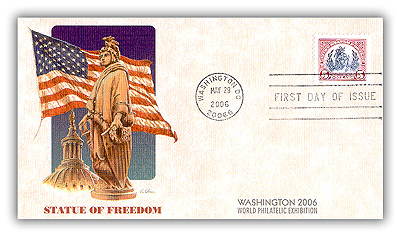 The statue features a female symbolizing freedom draped in classical robes. Her left hand holds a laurel wreath of victory and the shield of the U.S. with 13 stripes. She wears a helmet encircled by stars and topped by an eagle’s head and talons. The statue weighs nearly 15,000 pounds and is 19 feet 6 inches tall. Removed for renovation in 1993, Freedom was returned less than six months later, in time for the Capitol’s bicentennial celebration.

Click here for photos and more about the Statue of Freedom.

Click here for more stamps picturing the Capitol and the Statue of Freedom.