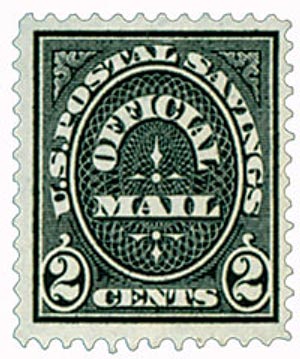 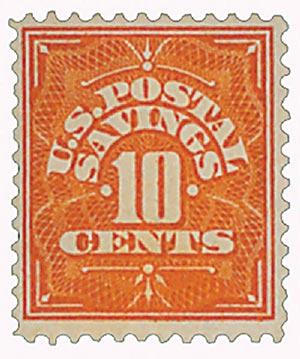 US #PS1 – The first Postal Savings stamp. Click the image to order.

Under the program, lower- and middle-income individuals were able to deposit funds at their local post office.  Postal Mail stamps, given as proof of the deposit, were redeemable in the form of credits to Postal Savings accounts.

The act also directed the Postmaster General to issue stamps in five denominations to be used instead of traditional Official Mail envelopes.  The first of these stamps was issued on December 22, 1910.  These stamps were used on mail pertaining to the business of the US Postal Savings System.

The Postal Savings System proved to be very popular among rural Americans and immigrants familiar with similar systems in their native countries.  It was also popular with working people who were unable to conduct transactions during the limited hours of traditional banks.  Postal Savings deposits could be made six days per week between the hours of 8 a.m. and 6 p.m.  The system eventually extended to over 5,000 post offices in 48 states.

Though the Postal Savings System continued for years to come, the official stamps were discontinued in 1914.  Postmasters were instructed to return the unused stamps, which were destroyed.