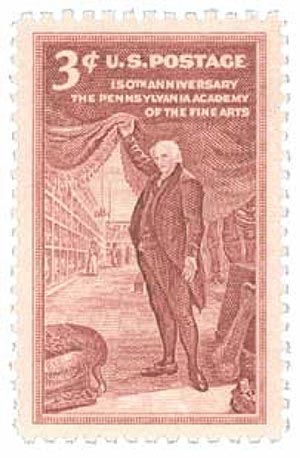 US #1064 was issued for the 150th anniversary of the academy. Click the picture to buy.

On December 26, 1805, the Pennsylvania Academy of Fine Arts was founded – the first and oldest art museum and art school in the country.  The Academy was the brainchild of artist Charles Willson Peale, sculptor Benjamin Rush, and other artists and businessmen.

In their academy charter dated December 26, 1805, the founders proclaimed that the academy would “promote the cultivation of the Fine Arts, in the United States of America, by… exciting the efforts of artists, gradually to unfold, enlighten, and invigorate the talents of our Countrymen.

The academy grew slowly in its early years. In 1806 it held its exhibitions in a new building designed by John Dorsey. The academy then opened its museum in 1807 and hosted its first exhibition in 1811.  That exhibition included more than 500 paintings and statues. The first classes there were held a year earlier in 1819. 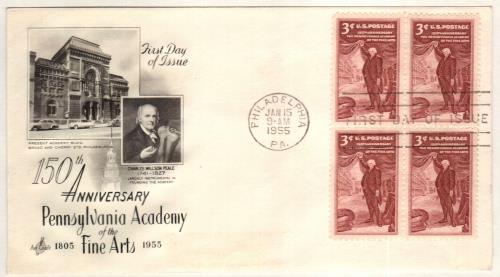 In the 1820s, the school realized they needed more room for students to copy from sculptures and oil paintings, so they added a library and statue gallery. Portions of this gallery were open to the public, and coupled with the growing collection, offered the people of Philadelphia their only consistent museum to see painting and sculptures. 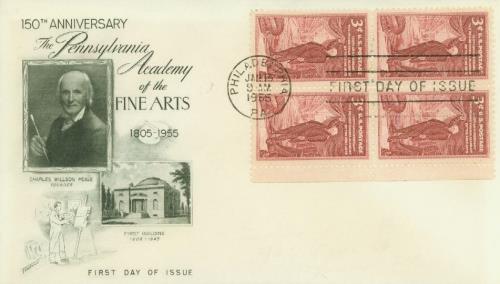 The academy remained in the same building for several years but had to be rebuilt after a fire in 1845.  Then, after years of fund-raising, the academy’s creators secured the money to construct the current building in 1876.  That same year, the former student and artist Thomas Eakins returned to the school to teach.  By 1882 he was made director and took great strides to improve the curriculum. 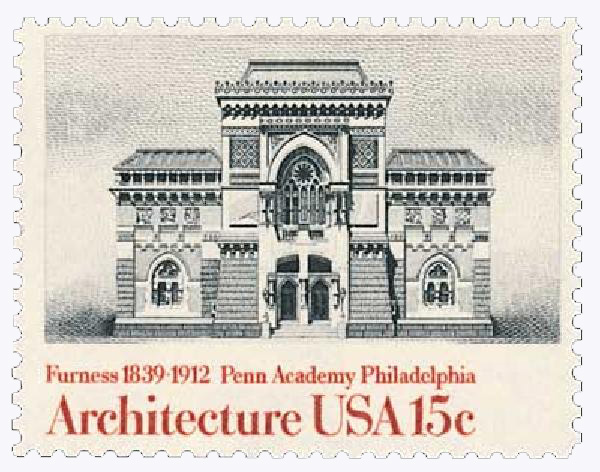 US #1840 from the American Architecture issue. Click the picture to buy.

For over a century, the academy also hosted annual art exhibitions, which helped them to acquire significant works of art. These included the works of major artists such as Cecilia Beaux, William Merritt Chase, Frank Duveneck, Thomas Eakins, Winslow Homer, Childe Hassam, and Edmund Tarbell, Robert Henri, and John Sloan. 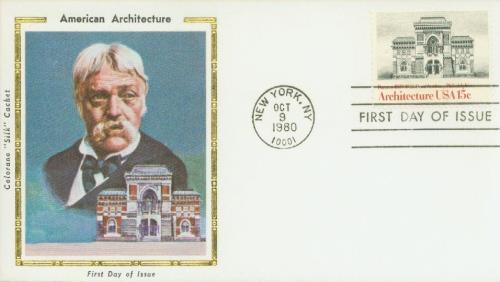 During both World Wars, academy students and faculty served in the military and provided combat art for various publications. In 1955, the academy celebrated its 150th anniversary with national and international events.  They staged a special exhibition that toured the US and six European cities.  There was also a special stamp issued for the event with a first-day postal station set up right at the academy.

The stamp pictures Charles Wilson Peale’s self-portrait, The Artist in His Museum.  Peale collected many of the museum’s exhibits, and he includes some of them in his painting.  The stamp features several, like a wild turkey ready to be preserved. The stamp also shows a great mastodon bone, in honor of one of Peale’s greatest achievements – the rebuilding of a mastodon’s skeleton. 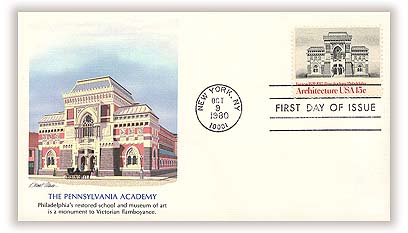 Today the museum is world famous for its collection of 18th-, 19th-, and 20th-century American paintings, sculptures, and works on paper. The academy’s museum building was declared a National Historic Landmark in 1975.