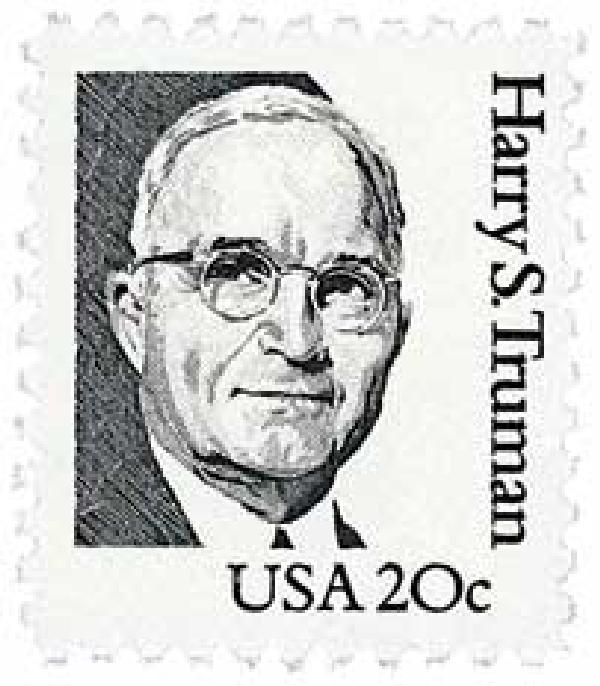 Harry S. Truman was born in Missouri on May 8, 1884. After graduating from high school, he worked as a clerk for a railroad construction company and two banks. In 1906, he returned to his family farm to help his father and joined the Missouri National Guard. When the U.S. entered World War I, Truman organized a regiment that was called into service. He became a captain, and his unit was sent to France where it saw heavy fighting.

After the war, Truman returned to Missouri and opened a men’s clothing store in Kansas City, but it failed three years later because of the poor economy. While working in his store, Truman became involved in politics. In 1922, he was elected to be one of three judges of the Jackson County court. Though it was an administrative position, he built a reputation for integrity and efficiency. After losing his bid for reelection in 1924, Truman was elected as judge for the court two years later. 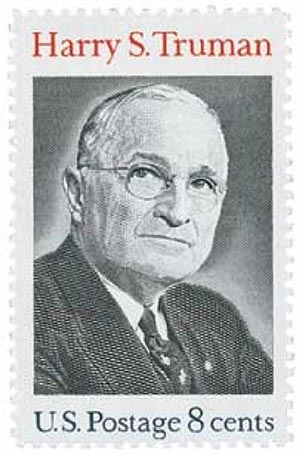 Truman became known as an honest politician and was elected to represent the state of Missouri in the U.S. Senate in 1934. Serving on the Appropriations Committee, he helped push for funding of President Roosevelt’s New Deal programs. As a member of the Interstate Commerce Committee, Truman investigated railroads and transportation across state lines. He also co-wrote the Civil Aeronautics Act of 1938, which led to supervision of the airplane industry.

During Truman’s second term, he chaired the Senate Special Committee to Investigate the National Defense Program. His commission focused on excess spending by defense contractors and saved the country an estimated $15 billion. Truman became a national figure through his work, and the committee was named in his honor. He also caught the attention of President Franklin D. Roosevelt.

At that time, the President was planning for his fourth term in office. His health was failing, and there was a strong possibility he would not survive his tenure. FDR’s Vice President Henry Wallace was unpopular with the Democratic leadership, so the President looked for an alternative. He wanted a Vice President who could guide the country through the end of the war. Roosevelt chose Truman as his running mate, and Truman proved to be an energetic campaigner.

After his election, Truman took the oath of office on January 20, 1945. Roosevelt did not share many details of the presidency, including ongoing research into an atomic weapon. The President died only 82 days after he started his last term. At Truman’s swearing-in ceremony the same day, the new President said he “felt like the moon, the stars, and all the planets had fallen on” him.

At his first Cabinet meeting, Truman asked all of Roosevelt’s members to stay on. When the session ended, the secretary of war remained behind to tell the new President about the top-secret Manhattan Project, which was developing an atomic bomb. It was Truman’s first indication of such a program. Within months, he would make a history-changing decision about the new weapon.

Soon after Truman’s swearing-in, Germany surrendered to the Allies. May 8, 1945, the President’s 61st birthday, was proclaimed Victory in Europe Day. The following month, a conference was held in San Francisco to develop the charter for the United Nations. The President addressed the final session. 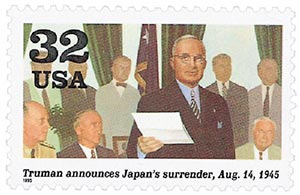 Japan did not respond to the order to surrender, and the President authorized the use of America’s secret weapon. On August 6, the first atom bomb was dropped on Hiroshima, followed by a second bomb that destroyed Nagasaki three days later. The Japanese surrendered on August 14, bringing an end to World War II.

The rest of Truman’s first term was marked by continued foreign policy decisions. The relationship between the U.S. and Russia quickly deteriorated after the war. The Union of Soviet Socialist Republics (USSR) began expanding its communist influence in Eastern Europe. In response the President issued the Truman Doctrine, stating America would provide military aid to any country resisting communist takeover.

In addition to military aid, the U.S. also helped many European countries rebuild through the Marshall Plan. Beginning in 1948, America spent billions of dollars reviving the economies of former allies. Officially known as the European Recovery Plan, the program also strengthened democratic governments and increased trade to the U.S. 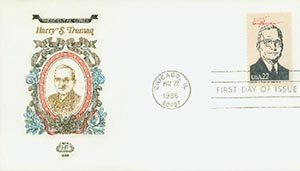 U.S. #2219f – Although he had free “franking” privileges as President, Truman always kept a coil of stamps in his desk to use on personal correspondence.

On the domestic front, Truman was tasked with leading the country through the transition from wartime to peacetime economy. Because of increased foreign trade, America was able to prosper.

A supporter of FDR’s New Deal, Truman wanted to expand Social Security, public housing, and control rent, wages, and prices, but Congress did not back many of his proposals. When his civil rights legislation was not passed, Truman created executive orders that desegregated the armed forces and prohibited racial discrimination in Federal employment.

Truman’s approval ratings had decreased entering the 1948 campaigning season. Southern Democrats were against his executive orders and formed a new party. When the President’s party nominated him for a second term, many people believed Republican candidate Thomas Dewey would beat him.

Truman took his campaign to small town America. His “Whistle-stop” tour stopped at rural train stations all around the country and he gave impromptu speeches to the voters other candidates ignored. After traveling over 30,000 miles his efforts paid off with an unlikely win.

The President’s second term in office proved to be as challenging as the first. With communism advancing in Eastern Europe, western countries formed a military alliance to protect themselves from further attacks. Realizing the need for America’s involvement, the North Atlantic Treaty Organization was formed with U.S. General Dwight Eisenhower
in command.

The defining event of Truman’s second term began in 1950. The Korean Peninsula had been divided after World War II. The north was supported by communist China and the Soviet Union. To the south, the non-communists were supported by the United States. On June 25, North Korean forces crossed the border into South Korea with the aim of taking over the country. Truman committed American troops to support the south and sponsored a United Nations resolution for military sanctions against the invaders. Fifteen countries joined the U.S. and South Korea in pushing the North Koreans and their Chinese allies back over the border. In an effort to avoid another world war, Truman refused to use nuclear weapons or attack the Chinese mainland. 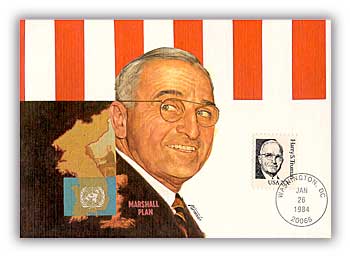 The President’s support dwindled as the Korean War dragged on with no apparent victory in sight. When he dismissed General MacArthur after the popular commander publicly disagreed with the President, Truman lost more potential voters.

The President alienated labor unions by seizing steel mills when owners refused to raise wages and workers threatened to strike. The move was ruled unconstitutional, further tarnishing Truman’s reputation. In March 1952, he announced he would not run for reelection.

When his term ended, Truman and his wife Bess returned to Independence, Missouri. The former President enjoyed his role as “Mr. Citizen” and filled his days with writing his memoirs, overseeing construction of his library, and taking long walks. Harry S. Truman died on December 26, 1972, and was buried in the library’s courtyard.