At an August 1924 performance of Minick, a large number of bats that had been resting in the play house’s chandeliers suddenly descended into the lower part of the theater, sending audience members running for the exits.  Once the bats were gone and the audience calmed down, the show’s producer joked,  “Next time… we won’t bother with tryouts. We’ll all charter a showboat and we’ll just drift down the rivers, playing the towns as we come to them.” 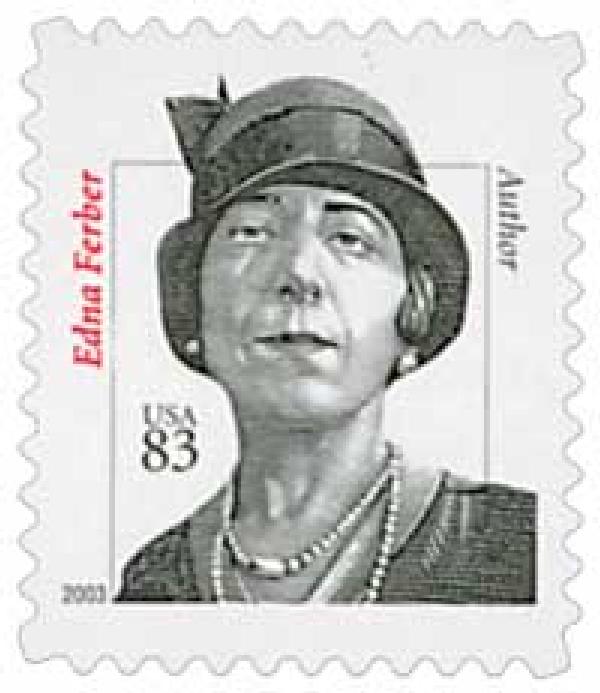 U.S. #3434 – Ferber has been called “the greatest American woman novelist of her day.”

Audience member Edna Ferber was intrigued.  She’d never heard of showboats before.  According to Ferber’s own personal account, “Here, I thought, was one of the most melodramatic and gorgeous bits of Americana that had ever come my way. It was not only the theater — it was the theater plus the glamour of the wandering drifting life, the drama of the river towns, the mystery and terror of the Mississippi itself… I spent a year hunting down every available scrap of showboat material; reading, interviewing, taking notes and making outlines.”  In 1925, Ferber even spent four days on one of the country’s last remaining showboats. 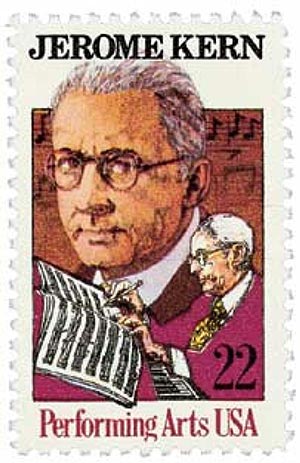 Ferber published Show Boat in the summer of 1926, and it was an instant hit – the number one bestseller for 12 weeks.  Composer Jerome Kern was among those impressed with the book and wanted to adapt it into a musical.  He arranged a meeting with Ferber, who was surprised by his idea.  She agreed to give Kern, and his collaborator Oscar Hammerstein II, the rights for their project.

After writing most of the first act songs, Kern and Hammerstein played them for producer Florenz Ziegfeld.  Impressed, Ziegfeld said “This is the best musical comedy I have ever been fortunate to get a hold of; I am thrilled to produce it, this show is the opportunity of my life.” 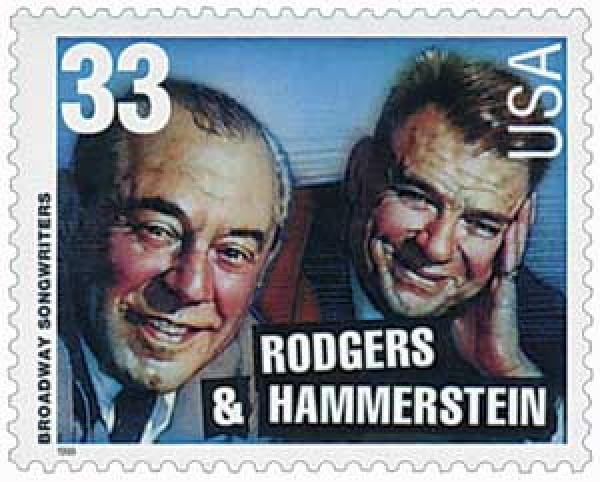 U.S. #3348 – Hammerstein later teamed up with Richard Rodgers in one of the greatest theater partnerships of the 20th century.

Show Boat premiered at Ziegfeld Theater on December 27, 1927, to very positive reviews.  The New York Times said it was “intelligently made,” with “unimpeachable skill and taste.”  The show ran for 572 performances over a year and a half.  Show Boat was later adapted again for film, in 1929, 1936, and 1951.

Kern and Hammerstein introduced such songs as “Make Believe”, “You Are Love”, and the stirring “Ol’ Man River.” Together, they made musical history. Hailed as an “American masterpiece” by the critics, Show Boat was indeed an artistic masterpiece and later a box office triumph. 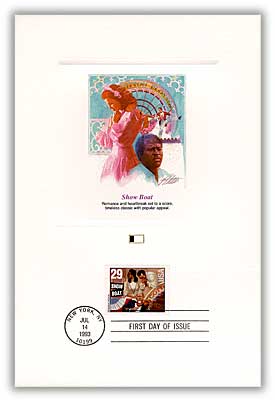 Show Boat paved the way for a form of musical that was distinct from the traditional fast-moving comedies and flamboyant operettas. Not only was it unique in that it was the first musical based on a serious literary work, but it was also the first musical to tackle such serious themes as racism and poverty.