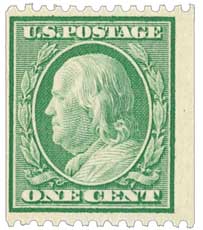 On December 29, 1908, the US Post Office Department issued its first coil stamps on a national scale.

Earlier that year, the Post Office experimented with coil stamps but only made them available in five cities. The experiment ended after a representative from the Post Office Department successfully “broke into” the vending machines used to sell the stamps.

Then on December 29, 1908, the Post Office Department ushered in a new era in both mail delivery and philately. On that day, the first coil stamp (US #348) was made available at post office windows around the country.

The 1¢ Franklin and the 1909 coil stamps that followed it, were produced on a slightly modified version of the same flat plate press used to print sheet stamps. After the sheets were printed, they were sent through a perforating machine and perforated in only one direction. Then, the printed and perforated stamp sheets were fed into another machine that would cut the sheets into twenty strips of twenty stamps each. 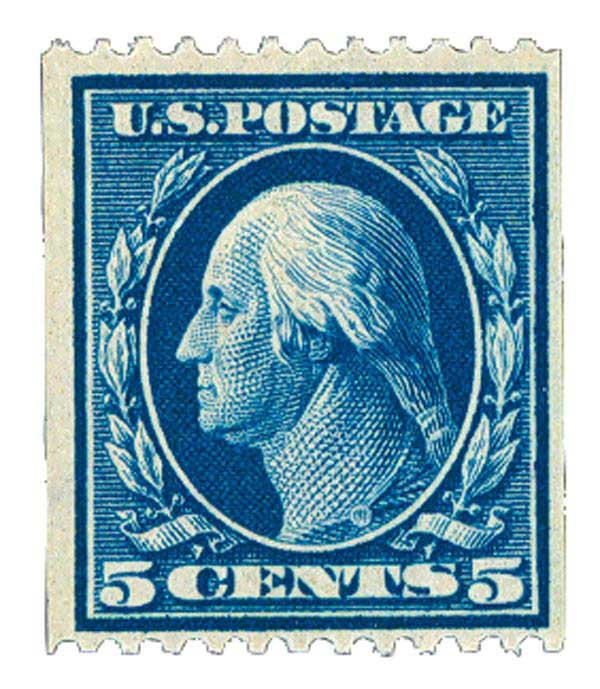 Because coils of only twenty stamps would not have been efficient for use in stamp vending machines, something had to be done to make the coils longer. Each of the strips had to be taken from the cutting machine by hand and glued end to end into coil rolls of either 500 or 1,000 stamps. This was the only step in the process that required manual labor. Soon, the Rotary Press would make it possible to nearly omit this step, thus automating the process almost entirely. Using the rotary press, workers only had to “paste-up” every 6,000 sheets!

This first batch of coils stamps was perforated 12, but it was discovered that they separated too easily. So in 1910, the Post Office began perforating the stamps 8 ½. But this made the stamps too difficult to separate. A perforation of 10 was then adopted beginning in 1914.