Posted on December 3, 2017 by MysticStamp

U.S. #U617 – America’s first hologram envelope with a silk cachet.

On December 3, 1989, the USPS issued its first postal item to be produced with a hologram – a 25¢ stamped envelope picturing a space shuttle docking at a space station.

The USPS first began considering creating postage with holograms in December 1987.  The technology was still relatively new at that point, having just been created in the 1960s.  The USPS spent much of 1988 researching the possibility and meeting with leading hologram manufacturers.

Through these meetings the USPS realized the both the good and bad sides of what they were hoping to do.  One drawback was that if they made a stamp, it would have to small, but holograms needed to be big to be effective.  Additionally, if the stamp needed to be held at a certain angle to read the denomination, that would be inconvenient.  Also, if the hologram covered the entire stamp surface, it would be nearly impossible to cancel.  The foil they would need to use tended not to hold ink, but it didn’t repel it either.

After these discussions, the USPS realized that the best option for a hologram would be a stamped envelope.  They decided that if they put a foil hologram on an adhesive label or inserted it into a window, they wouldn’t have to worry about these issues.  They would print the denomination on the envelope itself, which could be canceled.

In choosing the design for the stamped envelope, the USPS wanted something that was “as high-tech as the process” and thought the image should either be mythical or futuristic.  They ultimately settled on futuristic and wanted to create something similar to the Future Mail Transportation stamps.

Work on the envelope progressed quickly and it was issued on December 3, 1989.  It was issued in a special ceremony on Stamp Designers Day on the last day of the World Stamp Expo.  America was the third country to incorporate holograms into its postage.  Austria paved the way on October 18, 1988, with a hologram stamp picturing the nation’s emblem.  A year later, Brazil issued a souvenir sheet with a hologram on it for the art biennial.

The USPS learned a lot about working with holograms from this stamp and would continue to experiment in the coming years, issuing several more hologram stamped envelopes.  It wasn’t until 2000 that they first issued a hologram stamp – #3412.  In fact, that stamp was issued as part of a larger set honoring space exploration that included three other hologram stamps. 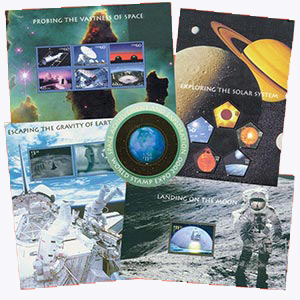 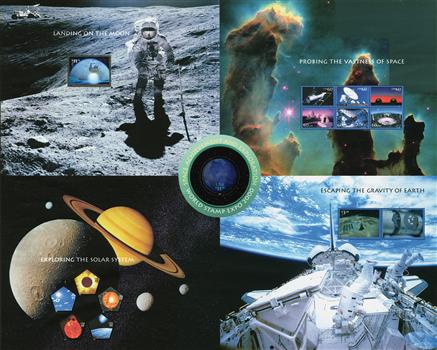