Marshall Plan Comes to an End

On December 31, 1951, the Marshall Plan expired after providing aid to millions of people in Western Europe.

The devastation caused by World War II led to slow recovery in Europe.  Trade was disrupted because most transportation routes had been destroyed.  Millions of people lived in refugee camps and relied on foreign aid for basic necessities.  Most European nations had no funds available for rebuilding.  Confusion, disorder, and economic chaos had left many of these war-torn nations vulnerable to Communist take-over.  The United States began an aid program to address these pressing issues. 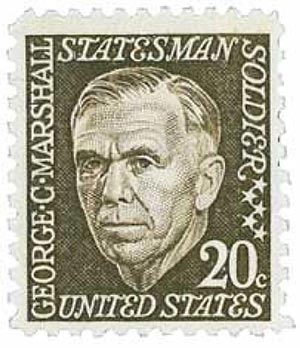 George Marshall, Harry Truman’s secretary of state, presented the plan to promote European reconstruction in a commencement speech he gave at Harvard University on June 5, 1947.  He said “It is logical that the United States should do whatever it is able to do to assist in the return of normal economic health to the world, without which there can be no political stability and no assured peace.”

The idea was seen as a way to contain the spread of communism and increase U.S. exports.  Marshall’s plan developed into the Economic Cooperation Act, which was signed into law by Truman on April 3, 1948.

During the next four years, the program sent over $13 billion to Western European nations in the form of grants and loans.  Many of the countries attained or surpassed pre-war production levels.  This reduced political unrest and brought more unity to Europe.  It not only helped define this century, but its success also paved the way for additional foreign aid programs, such as NATO. Today, nearly every country has received U.S. aid at one time or another.

Item #81878 – Event cover includes a cachet showing the map of nations affected by the Marshall Plan.

The Marshall Plan ended on December 31, 1951.  It was supposed to last until 1953, but was ended early due to the escalation of the Korean War.

George Marshall received a Nobel Peace Prize for the part he played in instituting the plan.  He is the only professional soldier to have received this distinguished award.