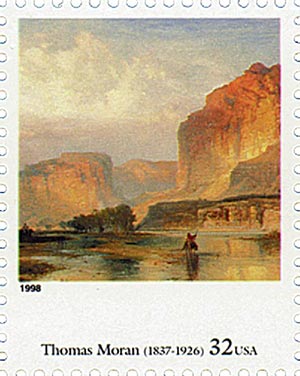 Moran’s parents were handloom weavers who lost their jobs as the mechanized weaving process expanded in England.  In search of work, they moved the family to Kensington, Pennsylvania, just outside of Philadelphia.

As a teenager, Moran worked as an apprentice with a wood-engraving firm.  He then started an engraving business with his two brothers.  However, he found the process boring and often turned to watercolors in his free time.  Moran also became an accomplished illustrator, with his illustrations appearing in a number of magazines and other publications.  While he found success in wood engraving, etching, and lithography, he was most fond of painting. 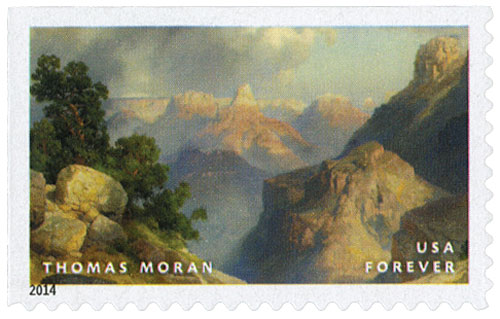 Moran was drawn to natural scenes of simple, picturesque beauty.  Although self-taught, he had a way of capturing the attractiveness of the world around him.  The basis for his most famous works would come from his ability to see nature, especially western scenery. 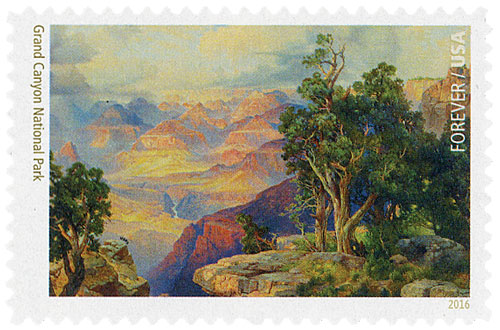 US #5080e pictures Moran’s The Grand Canyon of Arizona, from Hermit Rim Road.

In 1871, Jay Cooke, director of the Northern Pacific Railroad, recommended Moran to Dr. Ferdinand Hayden, director of the United States Geological Survey.  Cooke was funding Hayden’s trip to the Yellowstone region and suggested he bring Moran, who he described as “an artist of Philadelphia of rare genius.”  Moran, along with photographer William Henry Jackson, was asked to capture images of the Yellowstone area in hopes of creating a tourist destination and a profitable new railroad line. 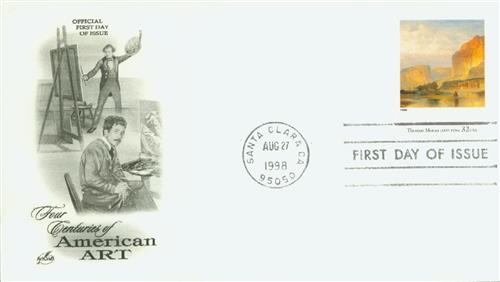 During his 40 days in the Yellowstone area, Moran sketched more than 30 different sites and kept a detailed diary of the expedition’s daily activities.  In awe of the unfamiliar landscapes, Moran confessed that the “beautiful tints were beyond the reach of human art.”  He would illustrate the then-unknown wonders of the vast Western Territory. 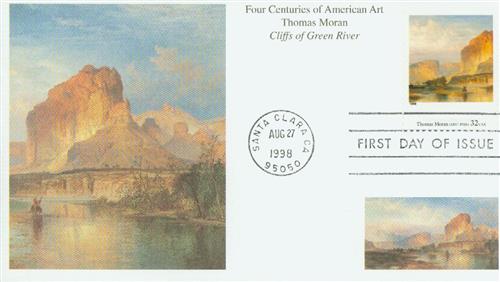 Upon his return east, Moran took to a large canvas to convey the grandeur of Yellowstone from memory.  The result, Grand Canyon of the Yellowstone, was a panoramic masterpiece measuring seven-by-twelve-feet, which Congress promptly purchased for $10,000.  Moran’s depictions of the area influenced the establishment of the 3,500-square-mile area as the nation’s first National Park in 1872. 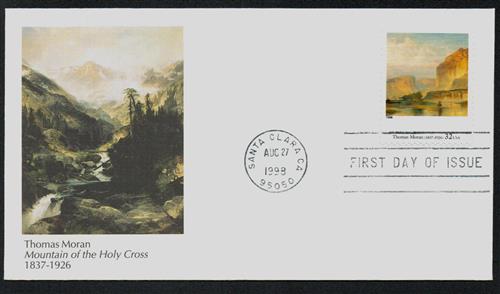 Subsequent expeditions west began Moran’s particular interest in the Grand Canyon.  It became his greatest source of inspiration.  Over the last 25 years of his life, Moran would travel to the canyon almost annually, producing hundreds of works in all. 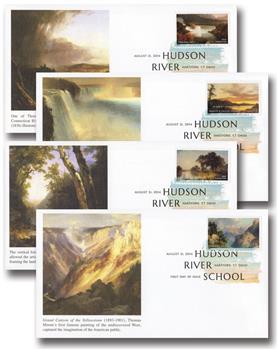 US #4917-20 – The set of four Hudson River School First Day Covers includes one featuring Moran’s Grand Canyon of the Yellowstone.

Known as the “landscape artist of the American West,” Moran’s portrayals of the Western United States were instrumental in promoting commerce and expansion westward in the latter part of the 19th century.  He died on August 25, 1926, in Santa Barbara, California.

Moran’s home in East Hampton, New York was made a National Historic Landmark.  Moran Point at the Grand Canyon and Mount Moran in the Grand Teton National Park were named in his honor.