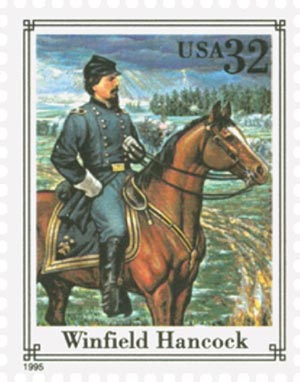 Winfield Scott Hancock was born on February 14, 1824, in Montgomeryville, Pennsylvania.

Named after the legendary War of 1812 general, Winfield Scott, Hancock attended the Norristown Academy and public schools before he was nominated to the US Military Academy at West Point. He was an average student, graduating 18th out of 25 and was assigned to the 6th US Infantry. 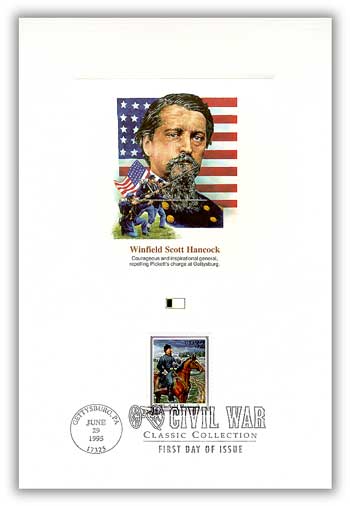 Initially, Hancock served in Indian Territory, which was uneventful. But when the Mexican-American War broke out, he volunteered to serve at the front. He recruited soldiers in Kentucky before being sent to Puebla, Mexico, where he served under his namesake, General Winfield Scott. 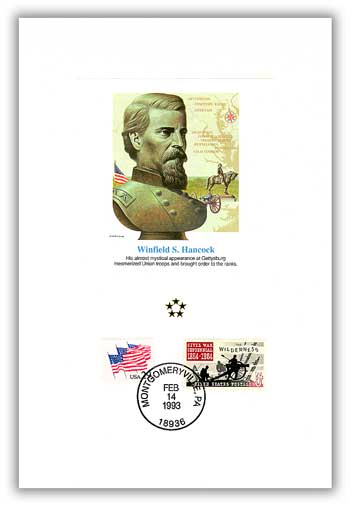 Hancock first saw battle at Contreras and Churubusco. He received a brevet promotion for his bravery in those battles. However, he was wounded at Churubusco and developed a fever that prevented him from participating in the breakthrough to Mexico City, which he always regretted. Hancock remained in Mexico until the signing of the peace treaty in 1848.

In the coming years, Hancock got married and served in Minnesota and Missouri. He was also in Florida for the end of the Third Seminole War. From there he served in Kansas and then California. Still in California at the outbreak of the Civil War, Hancock returned east to help General George McClellan organize and train the Army of the Potomac.

Appointed a brigadier general of volunteers, Hancock served in the Peninsular Campaign of 1862. During that campaign, he led a major counterattack at the Battle of Williamsburg. McClellan later telegraphed to Washington that “Hancock was superb today, which led to his nickname, “Hancock the Superb.” Over the next year, he would serve at Antietam, Fredericksburg, and Chancellorsville, suffering wounds at two of those battles. 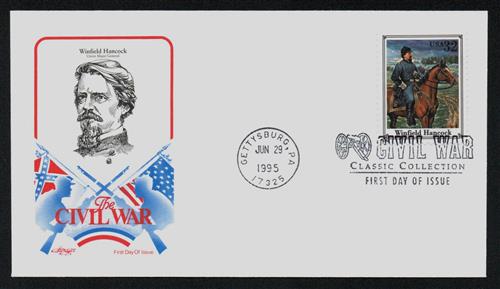 In May of 1863, Hancock took command of II Corps, which he led for most of the remaining two years of the war. Hancock played a big part in the battle of Gettysburg that July. He was given temporary command of the left wing of the army, organized the defenses at Cemetery Hill, and made the important decision to stand and fight there. On the second day of battle, he was in the center of the Union line at Cemetery Ridge and ordered a daring advance on the Confederates that helped buy time for the Union line to reorganize and survive the day. On July 3, Hancock and his troops took the brunt of Pickett’s Charge and he was seriously wounded. He later received the thanks of Congress for his role in the battle. 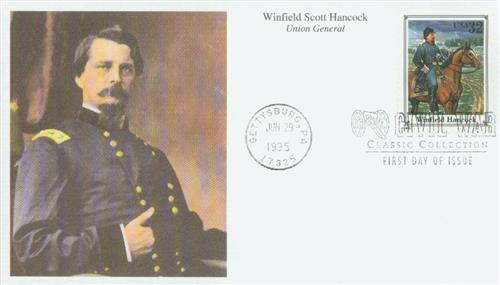 After recovering from his wound, Hancock returned to the front lines to participate in the attack on Richmond, Virginia, the following spring, leading II Corps in the battles of the Wilderness, Spotsylvania, Cold Harbor, and Petersburg. 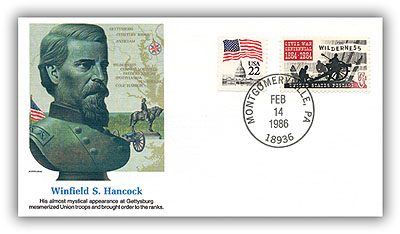 Following the war, Hancock continued to serve as a major general on the frontier. His military policies in Louisiana and Texas during the Reconstruction won Hancock the support of the Democrats, who nominated him for the presidency in 1880. After losing in a close election to Republican candidate James Garfield, he returned to military life. He died on February 9, 1886, in Governors Island, New York.