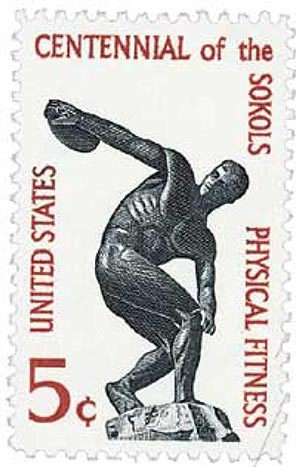 US #1262 was issued for the 100th anniversary of American Sokol.

On February 14, 1865, the first Sokol organization in the United States was established in St. Louis, Missouri.

The Sokol movement began in the Czech region of Austria-Hungary, Prague.  It was loosely based on the Ancient Greek practice of training athletes and warriors.  It was also directly influenced by the German Turnverein (also called the Turners) that were founded in 1811.

The first Sokol organization was founded on February 16, 1862, in Prague.  The founders developed a system of calisthenics and gymnastics that would help members develop a sense of individual discipline.  Their name, Sokol, is Czech for falcon, chosen because “The Falcon, is a bird who, by his swiftness and energy, symbolizes the active, vigorous, strenuous, real Spartan life, which is the ideal of Sokol programs.”

The Sokol motto was “A Sound Mind in a Sound Body.”  The fitness-training center provided lectures, discussions, and group outings that encouraged physical, moral, and intellectual training. They focused heavily on gymnastics, relating their studies back to those of the Ancient Greek athletes. 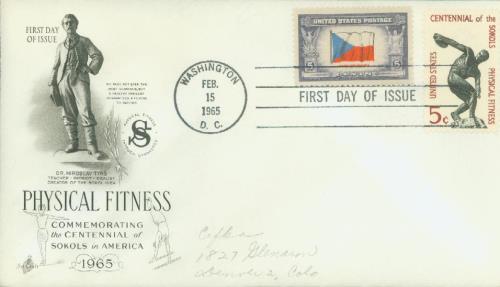 As more and more Czech people immigrated to the United States, they sought a sense of community and reminisced about the Sokol organizations back home.  On February 14, 1865, a group of Czech immigrants formed the first Sokol organization in America in St.  Louis, Missouri.  Soon more Sokol groups were established and by 1878, the US had 13 Sokol chapters.  At one point, there were 120 separate Sokol groups in the US. 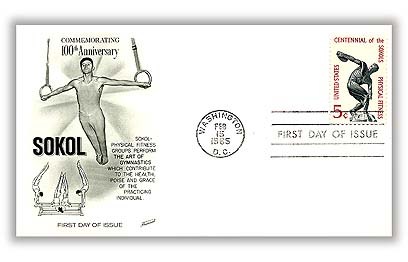 Facebook
This entry was posted in February 2020, This Day in History. Bookmark the permalink.
Click here to cancel reply.