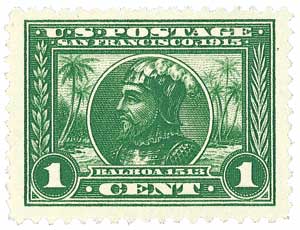 US #397 – The first Panama-Pacific commemorative issued in 1913 pictures Vasco Nunez de Balboa, who discovered the Pacific Ocean in 1513.

On February 20, 1915, the Panama-Pacific Exposition opened in San Francisco, California.

As early as 1891, businessmen from San Francisco had wanted to host a world’s fair in their city. They wanted to show the rest of the nation the progress they had made in transforming the small frontier town into a growing city complete with the world’s most active mint. 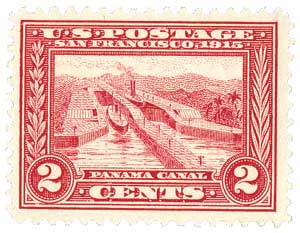 US #398 pictures the Panama Canal.

Businessman Rueben Hale first submitted a proposal for the fair in 1904. He proposed that it honor the completion of the Panama Canal (which was not yet done). Congress put off the decision. But then in April 1906, San Francisco was hit with one of the worst earthquakes in US history, destroying about 80 percent of the city. The fair’s organizers rebuilt their businesses but were still set on hosting the fair, now determined to show the world how they would recover from this natural disaster. In 1911, President Taft signed a resolution naming San Francisco the home of the Panama Pacific Exposition. 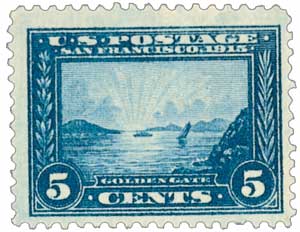 In just four years, the fair’s organizers would purchase land, demolish over 200 buildings, fill in marshland, and build up the 635-acre fair. Opening day finally came on February 20, 1915. The state’s governor at the time declared the day a legal holiday. Despite the rainy weather, a parade of 150,000 residents and visitors marched through the streets leading up to the fairgrounds. The group stretched about two and a half miles. The gates opened at 10 am, followed by speeches and prayers at the Tower of Jewels. Then at noon, President Woodrow Wilson pressed a gold telegraph key in Washington, DC. That sent a signal to the antenna at the Tower of Jewels that opened the doors of the exhibition palaces and sent water rushing from the Fountain of Energy. 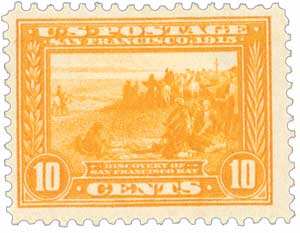 US #400 pictures the Discovery of San Francisco by Gaspar de Portola.

The fair included a number of fascinating attractions. In the Palace of Transportation, the Ford Motor Company had a working assembly line on display that produced a new automobile every 10 minutes. Many people had their first opportunity to see a plane in action with the Loughead (later changed to Lockheed) brothers taking fairgoers on 10-minute flights and Lincoln Beachey and Art Smith performing aerial stunts. 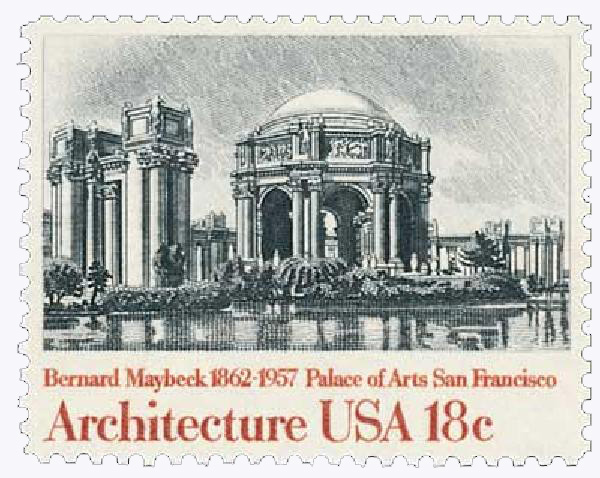 US #1930 – Rebuilt in 1965, the Palace of Fine Arts is one of the few buildings still standing on its original site.

Alexander Graham Bell also had a transatlantic telephone set up. Just a month after he’d made the first transatlantic call, he had a phone set up a the fair connected to one in New York where a person on the other end read newspaper headlines and played music. Visitors were also treated a 5-acre working model of the Panama Canal Zone.

The fair ran until December 4, 1915. During that time, over 18 million visitors attended the fair.

As early as 1904, the Post Office Department began planning a set of commemoratives to advertise the exposition to celebrate both the discovery of the Pacific Ocean and the completion of the Panama Canal. By 1912, the designs for the 1¢, 2¢, and 5¢ stamps had been prepared and approved. However, the design for the 10c issue posed a problem. Originally, the stamp was to depict Juan Rodriguez Cabrillo, who discovered the California mainland in 1542. But efforts to find a portrait of him proved unsuccessful. Eventually, a painting of the discovery of San Francisco Bay was unearthed. Found to be an acceptable design, it was adopted by the Post Office Department, and work on the stamp progressed rapidly. Six short months later, the Panama-Pacific Commemoratives were placed on sale.

Due to the fact that the exposition didn’t open until February 1915, the series remained current for nearly three years – longer than any other commemorative! However, the Post Office began to receive complaints that regular issue stamps were too brittle, so they started issuing stamps with 10 perforations per two centimeters, instead of the previous 12. The Panama-Pacific set was reissued with the new perforation size. However, since collectors had already purchased the perf. 12 stamps, the newer issues were mostly ignored. This makes them scarcer today.

Click here to view photos, maps, a virtual tour and more from the exposition.