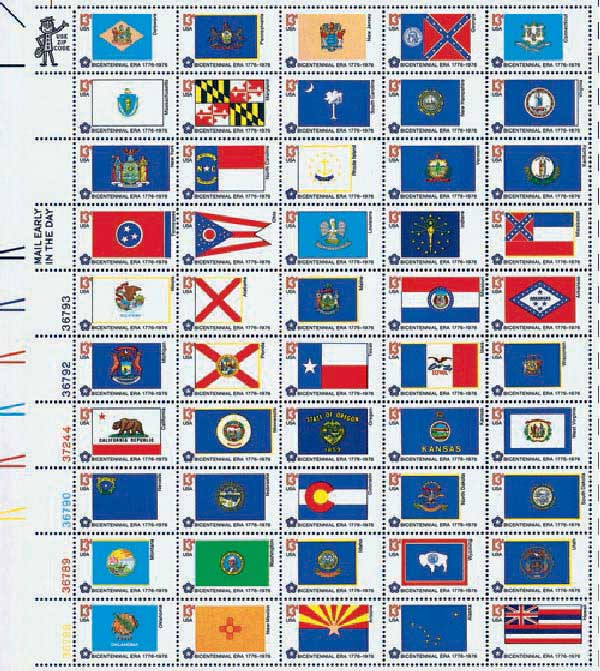 Up until the 1960s, when the US produced stamps, all the stamps on a sheet usually had the same design. They first strayed from this format in 1964 when the US Post Office issued its first-ever se-tenant.

Se-tenant is a French phrase meaning “joined together.” When referring to stamps, se-tenants are blocks of stamps that are printed on the same sheet with different designs. The first US se-tenant was the Christmas issue of 1964, which included four different stamps. The format proved popular, and in the coming years, the Post Office continued to issue stamps in this format. 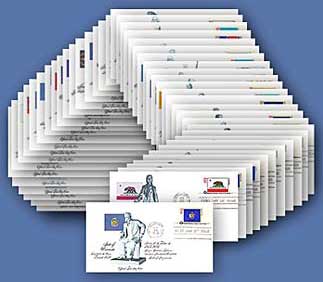 In the early 1970s, the US was preparing to celebrate the bicentennial. All over the country homes and businesses were decked out in red, white, and blue. Small towns and big cities held parades and festivities to mark the occasion. The USPS was also working on an extensive series of Bicentennial stamps honoring battles, heroes, and other events and topics relating to the era.

One of the most popular issues in the Bicentennial series was the State Flags se-tenant. Issued on February 23, 1976, it was the first US se-tenant to include 50 different stamps. It features the designs of every US state flag and each stamp includes the Bicentennial logo.   The stamps were arranged on the sheet in the same order they were admitted into the Union. 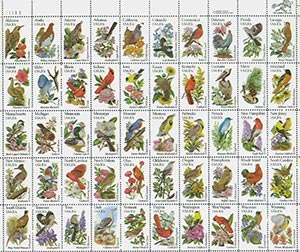 Six years later, the USPS was inspired by the wildlife art of Arthur and Alan Singer to produce another 50-stamp se-tenant. For over a year, the father and son team collaborated on 50 paintings of state birds and flowers. It was the first series of its size to have original artwork for each different stamp. These were America’s most popular stamps for several years. 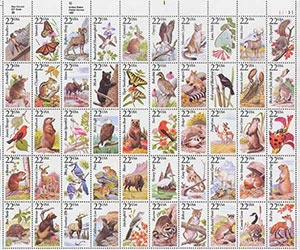 America’s third 50-stamp se-tenant came in 1987. It was issued to celebrate America’s variety of wildlife, and animal subjects were chosen to reflect the geographic and biological diversity of creatures native to this continent. All areas of the United States are represented, including Hawaii and Alaska. To point out the importance of environment and the realism of the designs, the artist pictured many of the animals with flora common to their habitats. 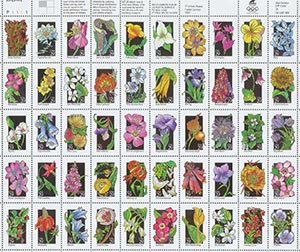 The fourth US se-tenant was the 1992 Wildflowers sheet. The USPS gathered 50 of the most popular varieties of wildflowers, put them in a bouquet, and presented them to the public. Each of the species featured on these stamps is native to North America and can be found today in at least one of the 50 states. 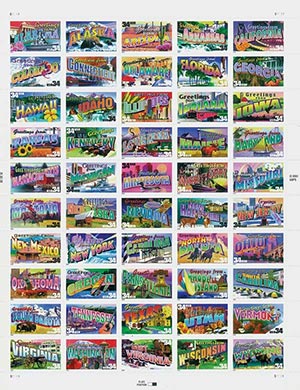 In April 2002, the USPS issued the Greetings from America stamps. This marked the first time a US postage stamp was issued on the same day in every state. The Greetings from America stamps are reminiscent of the large-letter greetings postcards that vacationing tourists of the 1930s and 1940s sent back home. In addition to the state name, each stamp contains images identified with that state. The state bird, flower, tree, capital, and date of statehood appear on the back of the liner release paper. Due to a rate change, this sheet was reissued with 37¢ denominations on October 25, 2002. 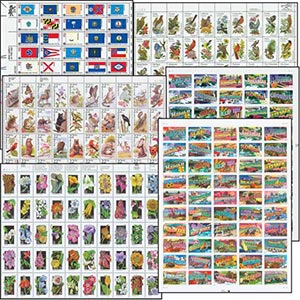