US #RJA9 – An early Narcotic stamp overprinted on a Documentary Stamp.

On February 25, 1919, a Narcotic Tax was officially instated.

The Revenue Act of 1918 made Narcotic stamps necessary. The law was enacted during World War I to raise additional money to fund it. A portion of the law was written to amend the Harrison Narcotic Law of 1914. 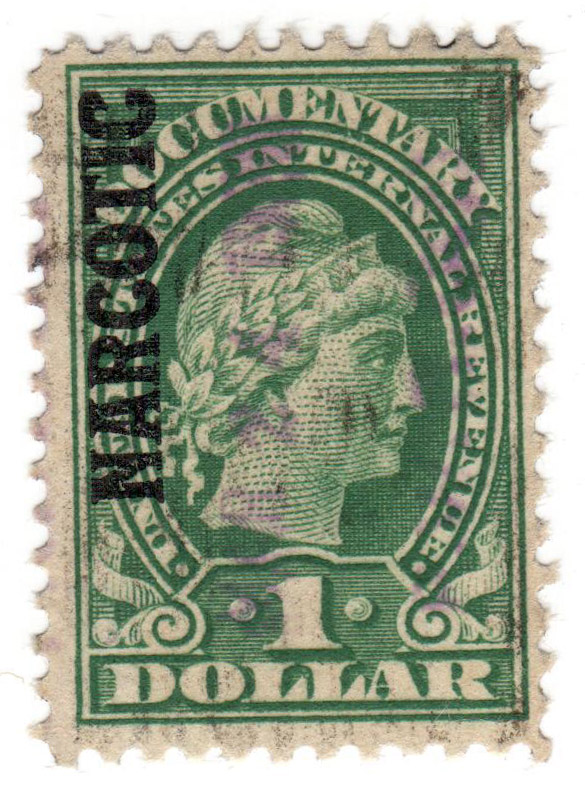 US #RJA21 – Another overprinted Documentary Stamp.

In this new act, the tax on narcotics was clarified. A statement issued by the commissioner of Internal Revenue stated new stamps were to be used by importers, manufacturers, and producers of the drugs. The stamps were to be affixed to the packages and canceled with an abbreviation of the company’s name and its registration number, proving the tax had been paid.

The tax went into effect on February 25, 1919, and placed a one-cent-per-ounce tax on substances such as opium, coca leaves, and their derivatives. The first stamps used were Documentary stamps of 1914 hand-stamped “NARCOTIC” in magenta or black ink. These were replaced later in the year with specific narcotic stamps. The large majority of the stamps used the same design. According to the regulations of the act, Narcotic stamps were to be purple and come in four sizes with various denominations.

The stamps were supplied by the tax collector of each district who was to keep strict records of each stamp issued. The act stated the stamps were to be affixed to each bottle or container of narcotic drug or preparation leaving a registered business. That meant each bottle, tube, package, or box had to be sealed with the proper stamp.

US #RJA74b – While most Narcotics stamps were purple, a few printed in green.

The cancellation of narcotic stamps was very specific. It had to include the company’s registration number, the district’s abbreviation, the business’s abbreviation, and the date of cancellation. It had to be done with red or black ink to be seen plainly against the purple ink of the stamp. Companies could also use a perforating machine to cancel the stamps. Sometimes, narcotic drugs were taxed more than once. If it was used to manufacture a new preparation, it would be taxed again. Every time, the rate would be the same – one cent for each ounce or fraction of an ounce.

US #RJA105 – A type 2 stamp with color bars in the two left corners. This type is more common, so it’s listed as the major number.

In 1963, the final issue of Narcotic Tax stamps was released as a result of a request from Wyeth Laboratories. The company had recently started marketing a new product they called Tubex and needed a stamp to fit the packaging. The Tubex was a disposable, glass tube filled with medication and had a hypodermic needle attached. This product proved to be less expensive and more convenient for hospitals and doctors than sterilizing and reusing needles and syringes.

The Tubex containers were packaged in heavy card stock boxes similar to what playing cards come in, but longer and narrower. Each box contained less than 30 milliliters or one ounce, so the 1¢ Narcotics stamp was all that was needed for the packages. A smaller stamp was developed to be placed across the top flap of the packaging, similar to cigarette or playing card stamps.

The new stamp was produced using offset printing. No denomination was printed on it. That was added later using a rubber plate. Revenue stamp experts believe this was done in case new values of this stamp were needed in the future. It was less expensive to change the rubber plate than to create a new stamp. A new denomination was never needed, though. It seems the small 1¢ stamp was only used by Wyeth Laboratories for their products. It was not a convenient size for other containers. The stamp produced for Tubex was RJA105. There are three different “types” which you can see illustrated above. The main difference in these stamps is the use of color bars, which the BEP used to align the stamps before the denominations were added.

The Narcotic Tax lasted less than 60 years before being repealed in 1971. All other Revenue stamps fell out of use later that year.