Posted on February 4, 2017 by MysticStamp

Charles Augustus Lindbergh was born on February 4, 1902, in Detroit, Michigan.

The son of a U.S. Congressman and a chemistry teacher, Lindbergh moved a lot during his childhood, spending time in Little Falls, Minnesota, Washington, D.C., and Redondo Beach, California.

“Lucky Lindy” began his aviation career at the age of 20, after he left the University of Wisconsin to enroll in flight school. Soon he was a barnstormer, offering plane rides for $5 a person and performing as a stunt pilot at fairs. In 1924 Lindbergh began a year of military flight training with the U.S. Army Air Service. He went on to graduate first in his class and was commissioned a 2nd Lieutenant in the Air Service Reserve Corps.

U.S. #C10 was the first U.S. stamp to honor a living person. It was issued after thousands of people wrote in requesting a stamp to honor Lindbergh’s flight.

At the time, the military didn’t need active duty pilots, so Lindbergh found more work as a barnstormer and flight instructor. Then in October 1925, he was hired to plan and fly the 278-mile Contract Air Mail Route from St. Louis to Chicago. During this service there were two occasions when bad weather or equipment failure forced him to abandon the plane, though he always recovered the mail and ensured it reached its destination.

Since 1919, a New York City hotel owner, Raymond Orteig, had offered a $25,000 reward to the first pilot to fly non-stop across the Atlantic Ocean. Several pilots attempted to earn this prize, but all failed – some were injured or even killed. In 1927, this unclaimed prize came to Lindbergh’s attention. He believed the trip was possible with the right plane. 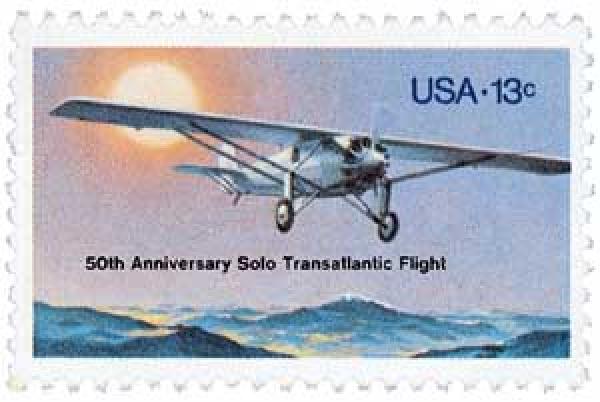 U.S. #1710 was issued on the 50th anniversary of Lindbergh’s transatlantic flight from New York to Paris.

Lindbergh convinced a group of St. Louis businessmen to give him the financial support he needed to build a special airplane of his own design. He named the plane the Spirit of St. Louis. Lindbergh’s plane was so heavy with fuel it barely cleared the telephone lines to begin the daring flight.

On May 20, 1927, at 7:52 a.m., Lindbergh took off in the Spirit of St. Louis from Roosevelt Field, located near New York City. His only tools were a compass, an airspeed indicator, and his own navigational skills.

Item #59715A – Commemorative coin cover with U.S. and French stamps cancelled on the anniversary of Lindbergh’s transatlantic flight.

Thirty-three-and-a-half hours later, Lindbergh landed near Paris at Bourget Field. A huge crowd of 100,000 people rushed onto the runway to meet him. The next day, another crowd formed outside the American Embassy where he was staying, cheering and waving hats and handkerchiefs. Lindbergh received the Legion of Honor Medal from the President of France, the Distinguished Flying Cross, and was awarded the Congressional Medal of Honor by U.S. President Coolidge. Lindbergh’s daring flight made him an international celebrity and a respected authority on aviation.

Within two months of his return, Lindbergh published an autobiography and embarked on an extensive U.S. and Latin American tour. Lindbergh’s fame and promotion of aviation led to a vast increase in flight. The amount of airmail sent doubled, pilots’ licenses tripled, and the number of planes produced quadrupled. 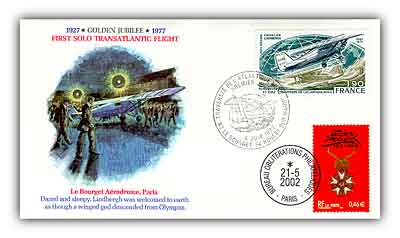 Following the kidnapping and death of his son, Lindbergh, bothered by the unrelenting public attention, whisked his family away to Europe. They remained there for three years before returning to the U.S. at the request of General “Hap” Arnold. As the war in Europe loomed, the American government requested that Lindbergh use his fame to visit European countries and assess the readiness of both Axis and Allied powers. Upon his return to the U.S., Lindbergh concluded that America should not get involved in the war. He then joined the America First Movement, which sought to keep the nation out of the war.

However, following the attack on Pearl Harbor, Lindbergh wanted to help his country and continually asked President Franklin Roosevelt to reinstate his commission in the Air Corps. Franklin turned him down, questioning his politics. Instead, Lindbergh joined Henry Ford as a technical advisor, trouble-shooting technical problems with the planes he was manufacturing for the war effort. 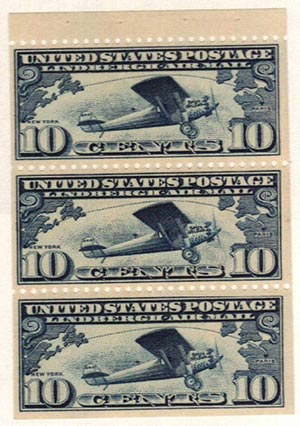 U.S. #C10a – The Spirit of St. Louis booklet pane was overlooked by collectors when it was issued.

In 1944, Lindbergh went to the Pacific Theater as a consultant for United Aircraft Company. While there, he showed Marine pilots how to safely take off with twice the payload the planes were designed for. He also showed them how to decrease their fuel use. Though he was still a civilian, Lindbergh flew his first of 50 combat missions on May 21. However, the military commanders feared the consequence of a civilian pilot getting hurt in action and forced him to return home. He returned to the U.S. the following September. One of the U.S. generals in the Pacific said, “Lindbergh’s contributions shortened the war by several months…” During his service there, Lindbergh shot down at least one Japanese plane. But perhaps his most lasting contributions were his suggestions on fuel conservation, which allowed for extended long-distance missions.

After the war, Lindbergh moved to Darien, Connecticut where he worked as a consultant to the Chief of Staff of the U.S. Air Force as well as Pan American World Airways. In his later years, Lindbergh launched several campaigns to protect endangered species. He then moved to Hawaii, where he died on August 26, 1974.