Posted on January 1, 2018 by MysticStamp 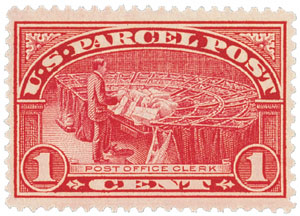 That changed when Congress passed a law on August 24, 1912 creating a parcel post service for fourth-class mail. Instead of private companies, the Postal Department would now deliver packages to all parts of the country. Rural Americans would now have access to goods and merchandise they could not have gotten before. This gave rise to mail order giants like Sears, Roebuck and Co., and Montgomery Ward and Co.

Parcel Post service could be used for sending items weighing 16 ounces or more through the mail. The mail is divided into four classes, with Parcel Post making up the fourth class. Almost any type of merchandise can be mailed parcel post, including day-old chicks, baby alligators, and honeybees. Only items that could be dangerous to handle cannot be sent through Parcel Post.

The Parcel Post service began on January 1, 1913. The special Parcel Post stamp were required on all fourth class packages. The stamps were an instant success. During the first five days, post offices reported that they handled over four million packages. However, despite this early surge in popularity, the stamps would quickly lose favor. Philatelic author Henry M. Gobie later dubbed these stamps the “Fourth Class Follies of 1913.” 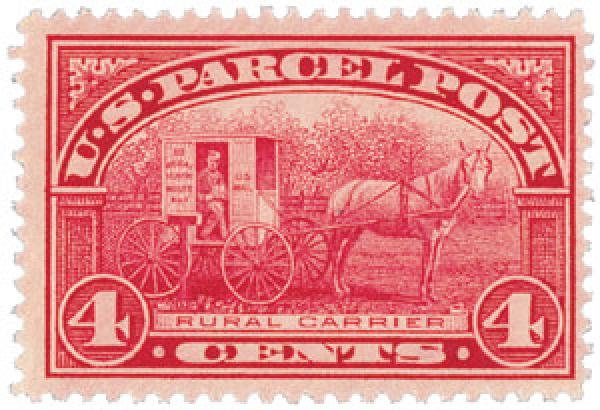 Postal employees objected to the Parcel Post stamps for several reasons. They stated the large stamps just didn’t fit where they needed to be applied. They also complained that they were all the same carmine color, making them difficult to distinguish one from the other. And they also disliked the odd number of stamps (45) per sheet. 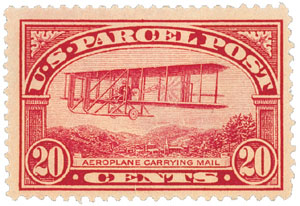 U.S. #Q8 – The world’s first stamp to picture an airplane.

Though these stamps had caused confusion, no one complained about their beauty, as the pictorial centers (vignettes) were some of the most interesting yet produced. The lower denomination stamps paid tribute to the postal service, showing mail carriers, clerks, and other vehicles that carried the mail. One Parcel Post stamp featured the first airplane ever shown on a government issued stamp. The four Parcel Post stamps with the highest denomination featured manufacturing and agriculture. The 75¢ stamp features a grain-harvesting scene. The threshing machine and team of horses stand in front of a large pile of grain. The design honored the farms of the Midwest. This stamp was the last of the series to be retired, and was still delivered to some post offices until 1922. 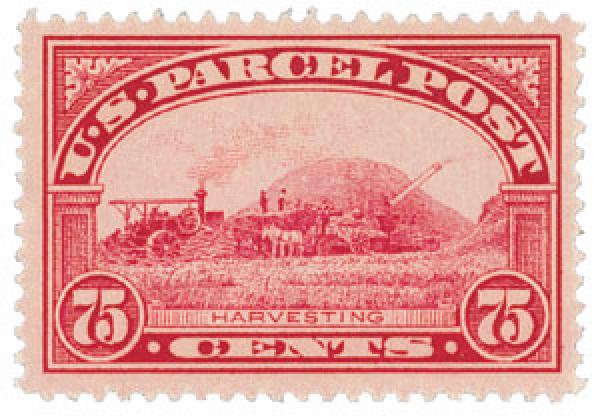 U.S. #Q11 was the last stamp in the series to be retired.

Parcel Post stamps may have been short lived, but the stories surrounding the US parcel post are not. One such story tells of a 48½-pound package (just under the 50-pound limit) sent from Grangeville to Lewiston, Idaho. The package contained four-year-old May Pierstorff! May’s parents wanted to send her to visit her grandparents, but found the train fare a bit steep. They decided to mail her for just 53¢. They attached the stamps to May’s coat, and she rode the entire way in the mail car. The mail clerk on duty, Leonard Mochel, delivered the girl to her grandmother’s door! 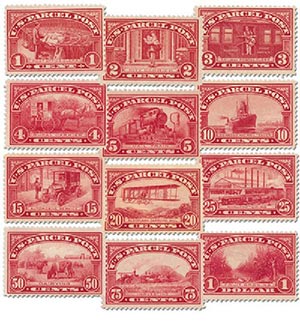 Take a look back the major events of 2017 through stamps. And be sure to check back tomorrow for more events and stamps.

One year after the character’s 75th anniversary, Wonder Woman starred in her first solo theatrical film. The movie was widely praised, set several records, and was one of the top 10 highest-grossing films of the year. 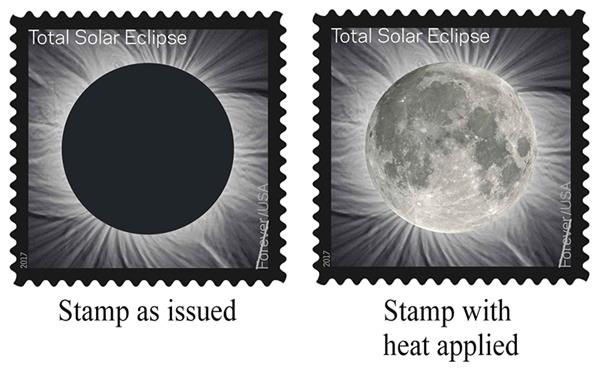 On August 21, 2017, America was treated to a rare sight – the first total solar eclipse to cross both coasts since 1918. Millions of Americans witnessed the rare phenomena and the USPS issued the world’s first-ever heat-sensitive stamp.