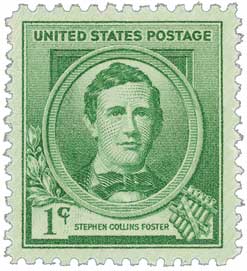 US #879 was issued in Bardstown, Kentucky, where Foster was inspired to write “My Old Kentucky Home.”

Stephen Collins Foster was born on July 4, 1826, in Lawrenceville, Pennsylvania.  The youngest of nine children, Foster attended private schools and taught himself to play the clarinet, violin, guitar, flute, and piano.

Foster never received a formal education in musical composition but wrote his first song, “Tioga Waltz,” when he was just 14 years old. He published his first song, “Open Thy Lattice Love,” three years later. Foster briefly attended college, but took a trip to Pittsburgh and never went back to school. Instead, he moved to Cincinnati, Ohio to work as a bookkeeper for his brother’s steamship company. 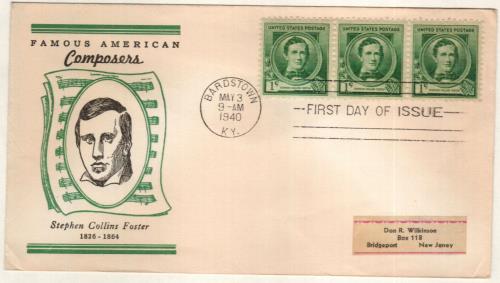 While in Cincinnati, Foster wrote his first successful songs between 1848 and 1849.  Among these songs was “Oh! Susanna,” which became a popular anthem of the California Gold Rush.  Also during this time, he published Foster’s Ethiopian Melodies, which included “Nelly Was a Lady,” popularized by the Christy Minstrels. 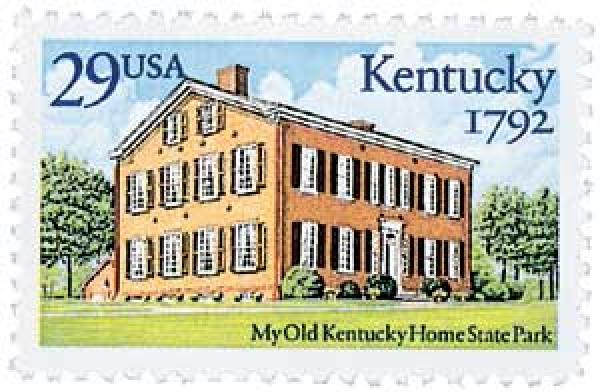 After that success, Foster moved back to Pennsylvania and signed a contract with the Christy Minstrels.  This would lead to perhaps his most successful musical period.  In the early 1850s, he wrote several now-famous songs, including “Camptown Races,” “Nelly By,” “Ring de Banjo,” “Old Folks at Home” (also known as “Swanee River”), “My Old Kentucky Home,” “Old Dog Tray,” and “Jeanie with the Light Brown Hair.”  Many of Foster’s songs had southern themes, though he never lived there and only visited once.

After the Civil War broke out and Abraham Lincoln called for volunteers, Foster set the poem “We Are Coming, Father Abra’am” to music.  There is little information about Foster’s final years, though he wrote the song “Beautiful Dreamer” sometime between 1862 and 1864.  In January 1864, he had a bad fever and fell, suffering a gruesome wound.  After he was discovered and taken to the hospital, Stephen Foster died on January 13, 1864, at just 37 years old. 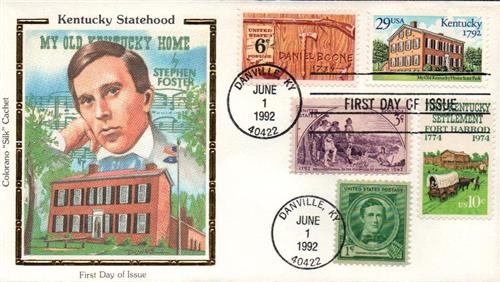 In the years since his death, Foster’s music went on to become even more widespread and popular.  Title 36 of the US Code names January 13 as Stephen Foster Memorial Day.  There are two state parks named in his honor, and another in honor of one of his songs: My Old Kentucky Home State Park.  “My Old Kentucky Home” is the state song of Kentucky and “Old Folks at Home” is the state song of Florida.

Click here to listen to some of Foster’s songs.