US #2052 was issued for the 200th anniversary of the Treaty of Paris. Click the image to order.

On January 14, 1784, the Confederation Congress ratified the Treaty of Paris, officially ending the American Revolutionary War.

In 1782, it became apparent to the British that the Colonies would soon win their independence.  Negotiations began in Paris that April.  John Adams, Benjamin Franklin, and John Jay represented the United States and Davis Hartley, a member of the parliament, spoke on behalf of King George III.

Negotiations lasted through the summer and both nations signed a preliminary agreement on November 30, 1782.  In spite of these peace talks, fighting continued in America.  In the meantime, the governments of both nations reviewed the terms of the agreement.  Then in February 1783, King George III issued the Proclamation of Cessation of Hostilities to end the fighting.  Likewise, the Confederation Congress issued a proclamation “Declaring the cessation of arms” against Great Britain that April.  Days later, they approved the preliminary peace agreement. 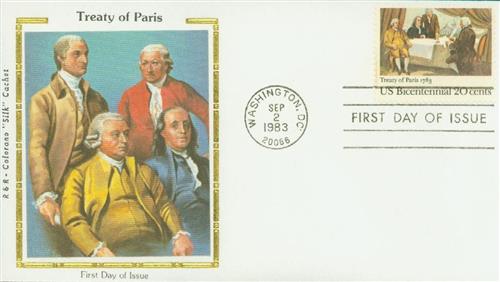 Nearly 10 months after their previous meeting, the representatives from both nations met once again at the Hotel d’York in Paris.  On September 3, 1783, they both signed the peace agreement.  Both sides agreed to “forget all past misunderstandings and differences” and “secure to both perpetual peace and harmony.” 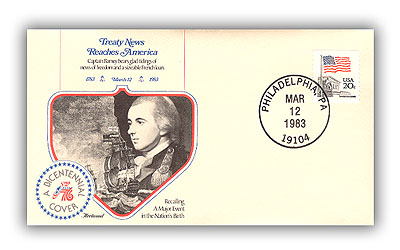 Item #115457 – Commemorative cover honoring the day news of the Treaty of Paris reached America. Click the image to order.

Great Britain acknowledged the United States as an independent nation, boundaries were determined, and prisoners of war were to be released.  The borders of the new nation were larger than before the war, and the US would become one of England’s major trading partners. 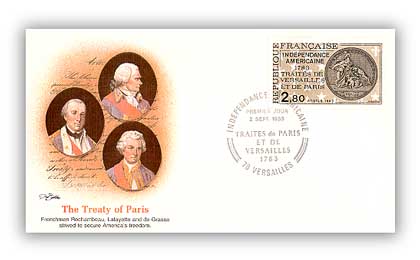 Item #57129B – France First Day Cover honoring the Treaty of Paris. Click the image to order.

After the Treaty of Paris was signed, it needed to go back to both nations for official ratification by their governments.  The ratified documents needed to be returned to England within six months.  Congress was supposed to meet on the issue that November, but the severe weather made it difficult for some representatives to make the trip to the Maryland State House.  By January 12, 1784, there were only representatives from seven of the thirteen states, and they needed approval by at least nine in order to ratify the document. 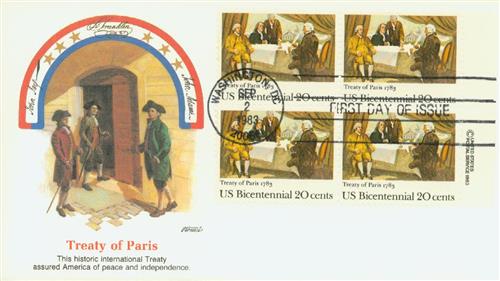 The representatives that were present debated over the issue extensively.  They considered allowing the seven states to vote and send the document to England with a note that they could get the additional votes for ratification if they wanted.  However, by January 14, two more representatives arrived, one leaving his sickbed in Philadelphia to cast his vote.  On January 14, 1784, Congress ratified the Treaty of Paris and quickly sent it on its two-month voyage to Europe.  The British ratified the treaty on April 9 and the ratified versions were exchanged in Paris on May 12.

Click here to read Congress’ proclamation of the ratification.