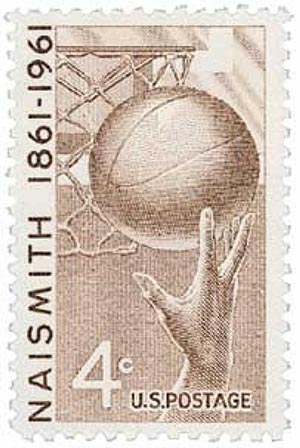 Naismith was born on November 6, 1861, in Almonte, Ontario, Canada. He was an athletic person, playing Canadian football, lacrosse, rugby, soccer, and gymnastics for McGill University on Montreal. Naismith earned his degree in Physical Education and became McGill’s first director of athletics. 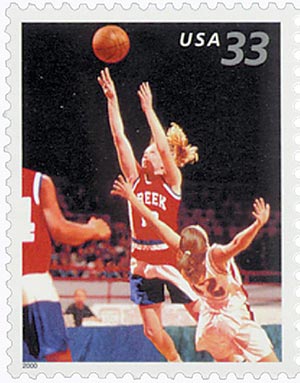 In 1891, Naismith left McGill to work as a physical education teacher at the YMCA International Training School in Springfield, Massachusetts. During his time there, Naismith was in charge of boisterous class that could only play indoor games during the cold New England winter. The students grew rowdy, leading the school’s director, Dr. Luther Gulick, to give Naismith a special task. He gave him 14 days to create a new game to be played indoors that would provide an “athletic distraction.” The game couldn’t require too much space, should help to keep track athletes in shape, and “make it fair for all players and not [be] too rough.”

To begin designing this new game, Naismith first considered the popular games of the time – rugby, lacrosse, soccer, football, hockey, and baseball. He believed that some of these sport balls were dangerous, but that a big, soft soccer ball would be the safest. Next, Naismith considered the fact that most of the physical contact in these games happened when players ran with the ball, dribbled, or hit it. So he decided that the ball could only be passed, again to make it safer. Naismith’s third idea to keep the game safe was that the goal should be unguardable, so he placed it above the players’ heads.

It’s been claimed that once he developed the basic ideas for the game, Naismith wrote out the 13 rules in about an hour. For the first games played in December 1891, Naismith used old peach baskets from the school cafeteria. He soon found it cumbersome to have someone remove the ball from the baskets throughout the game, so he decided to cut the bottom off of the basket, so the ball could fall through.   According to Naismith’s account, the students didn’t quite grasp all the rules at first. During that first game, “The boys began tackling, kicking and punching in the clinches. They ended up in a free-for-all in the middle of the gym floor. [The injury toll: several black eyes, one separated shoulder and one player knocked unconscious.] It certainly was murder.” 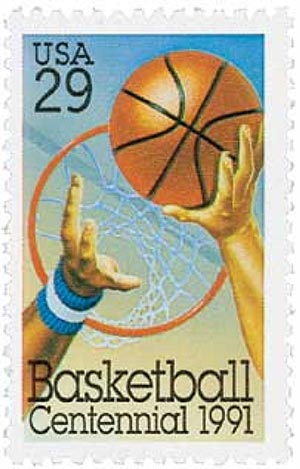 U.S. #2560 was issued for the 100th anniversary of the first basketball game.

Eventually the students grasped the rules and there were no more injuries. The game proved popular and Naismith soon decided to publish the rules to share with more people. So on January 15, 1892, he published the 13 rules of basketball in The Triangle, a local physical education journal. You can view the original article here (it begins on page 4). 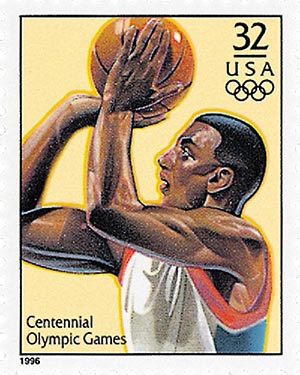 U.S. #3068t – Basketball was first introduced at the Olympics as a demonstration sport in 1904.

Basketball (some wanted to call it Naismith Ball, but its creator refused) continued to grow in popularity. The following year it was introduced nationally within the YMCA. The first professional basketball league was formed in 1898. Naismith never wanted fame or recognition for his creation, but he did get some satisfaction in seeing basketball made an official Olympic sport at the 1936 Olympic Games in Berlin.